Until last month, I had never heard of Esther Mabel Crawford (1872-1958).   But then I found this little woodblock print (4 3/8” x 6 ½") at Steven Thomas, Inc.’s website, which I immediately knew I had to add to my collection, and I began to scour the Internet to find out more about her career. 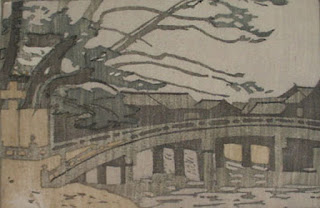 Born and raised in Atlanta, Georgia, Esther Crawford attended the Cincinnati Art Academy from 1894-1898 under Lewis H. Meakin, Thomas Noble, and Joseph H. Sharp.  In 1900, she studied at the Académie Carmen with James Whistler and Alphonse Mucha.  In 1901, she spent time at the Pratt Institute in Brooklyn, where she studied with Arthur Wesley Dow and Otto Walter Beck, and she also attended the South Kensington School of Design in London.  From 1904 to 1906, Crawford taught art at the Illinois School for the Deaf in Jacksonville, Illinois, and lectured on and off throughout the aughts at the University of Chicago.  She also studied with B.J.O. Nordfeldt in Chicago, an association that would have had to have taken place prior to Nordfeldt’s departure for Europe in 1908.

At some point between 1908 and 1910, Crawford traveled to Japan and China.  She appears to have returned to Chicago by January 1911, as she exhibited three oil paintings from her Asian trip at an exhibition at the Art Institute of Chicago (January 31 - February 26, 1911).  Thirty-six of her Japanese landscapes were exhibited by the Dubuque Art Association in March 1911.  Then, at another exhibition at the Art Institute of Chicago (May 9, 1911 - June 7, 1911), Crawford exhibited two woodblock prints:  “Old Canal, Kioto” (believed to be the print shown above) and “Rothenberg.” 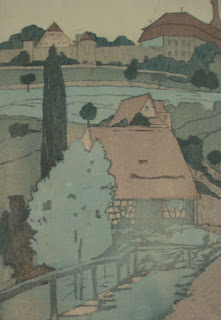 As Crawford’s Rothenberg print is not dated, one wonders in light of its subject matter whether it might have been executed prior to her residence in Illinois.  Crawford made at least one other woodblock print depicting a European landscape, “Old Venice,” that probably dates to the same time period as “Rothenberg.” 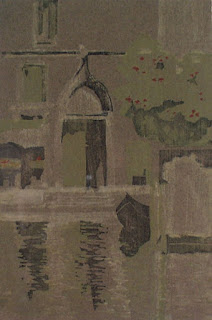 In the fall of 1911, Crawford took a position in the art department of the State Normal School in Los Angeles, California (now UCLA).  She once again exhibited “Old Canal, Kioto” in 1915 at a show held by The Print Makers of Los Angeles (later the Printmakers Society of California).  She also participated in the Southern California Panama Exposition in San Diego in 1915, winning a Bronze Medal -- although I have yet to determine exactly what paintings or prints she exhibited there or what piece won her a medal.  She became a member of the California Art Club and exhibited there on and off until over the course of the next twenty years.

By the end of the decade, Crawford had left the faculty of the State Normal School and she seems to have spent the following decade traveling and painting landscapes.  In addition to painting California landscapes, she also spent time in Arizona, New Mexico, and Hawaii.   Crawford returned to Japan in 1922, where she is reported to have studied, although I have no idea what she studied or under whom she received instruction.  She also made a return trip to China in 1929, which resulted in a number of oil paintings of Chinese landscapes. 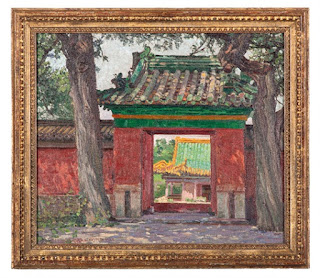 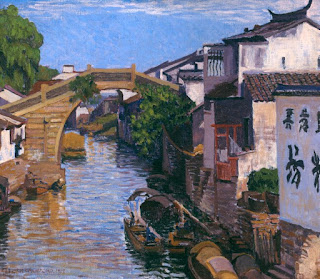 “Old Canal, Kioto” clearly shows Dow’s influence, both in style and in size.  Compare it, for example, with Dow’s “Gables by the Old Bridge” print, especially in the green-gray color palette.   (Having never seen two copies of any single Crawford print, I have no idea if she, like Dow, varied colors from print to print.)  She might have also been familiar with Nordfeldt’s 1906 print, “The Bridge,” although that is a far more mature work.  One can also see echoes of Dow’s “The Clam House” and “The Old Bridge” in her “Rothenberg” print. 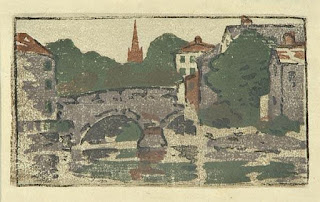 Crawford produced at least one other woodblock print as a result of her first trip to Japan, a piece known by the title “Cherry Trees.”  It is, in my opinion, her most interesting print by far, as she seems to be trying to crawl out from under Dow’s shadow and inject the scene with her own personal synthesis of Japanese aesthetics.  It appears to be her only print bearing a cartouche in the lower left corner that, while unclear, looks like a stylized version of her initials.  Her depiction of the trees and figures may well have been somewhat informed by Nordfeldt’s 1906 prints of “The Village Green, Twilight,” “The Tree,” and “Mist, The Anglers,” but that is certainly not a bad thing. 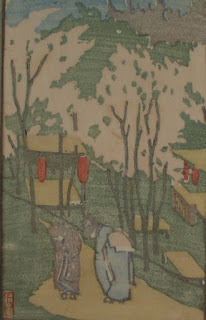 If I had encountered Crawford’s “Cherry Trees” unsigned in a dealer’s bin, my immediate reaction would have been that it was an early work by some late Meiji or early Taisho era sosaku hanga artist like Tsuruta Goro.  (By way of comparison, Tsuruta’s 1917 print “Fishing” is shown below.)  “Cherry Trees” is simultaneously both modern and crude, romantic without being cloyingly sweet.  It obviously lacks the carving and printing finesse of the master artisans employed by the shin hanga publishing houses, but it is not without charm.  While her rather static “Old Canal, Kioto” print is devoid of figures, it is hard to imagine her “Cherry Trees” print without the inclusion of the two women in the park. 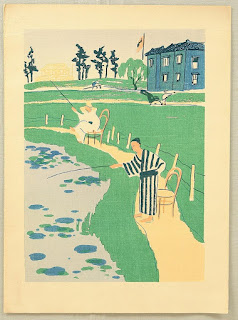 Steven Thomas -- the source of the images of the four Crawford woodblock prints depicted above -- informs me that another woodblock print by Crawford exists of an unspecified mountain landscape.  It’s doubtful that she produced many more designs, so we can only wonder how she might have developed as a woodblock print artist if she had continued to work in that genre.  A tantalizing suggestion might be found in this 1940s silk screen print by Crawford called “Homeward Bound,” which reminds me of certain woodblock prints by William S. Rice and Frances Gearhart. 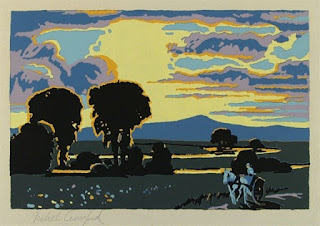 If a comment box doesn't appear below, click on this link instead: http://easternimp.blogspot.com/2015/06/esther-m-crawford.html
Posted by Darrel C. Karl at Friday, June 19, 2015