Sigisbert Chrétien (S.C.) Bosch Reitz (1860-1938) was a Dutch painter, museum curator, and an Oriental art scholar and collector.  Born into a wealthy Amsterdam family of art lovers, Bosch Reitz studied at the Amsterdamse Quellinusschool, at the Kunst Gewerbe Hoch Schule in Munich under Professor Barth, and then finished his studies at the Académie Julien in Paris in 1884.  His friends at the time were mostly the English pupils at the Académie (which therefore could have included Charles W. Bartlett).  Bosch Reitz would later win a gold medal from the Paris Salon in 1890 for one of his oil paintings. 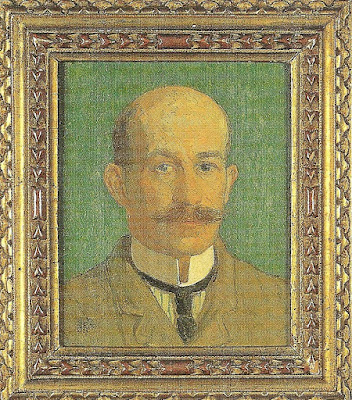 At some point during the 1890s, Bosch Reitz became a Japanophile and, in late December 1899, he left Europe on the Japanese ship “Sado Maru,” arriving in Japan sometime in the beginning of the new year.  Bosch Reitz would ultimately spend more than a year in Japan.  Japan’s picturesque landscapes, however, were of less interest to Bosch Reitz than its antique shops and museums.   His diaries from the trip survive and detail his various purchases.  One of his passions were ukiyo-e prints, especially by the Primitives.  During his trip he would also purchase prints by artists such as Hokusai, Harunobu, Utamaro, Kiyonaga, and Sharaku, and he was particularly fond of surimono prints by Hokkei.  But his collecting interests extended far beyond prints and included lacquer work (especially by Korin), embroideries, and ceramics.  While in Japan, Bosch Reitz also had an entire set of Japanese clothes tailor-made for himself.  By the end of his trip, Bosch Reitz had four crates of art and clothes to ship back to Europe. 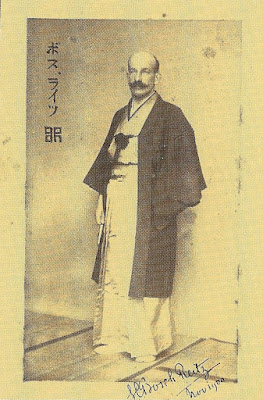 Bosch Reitz would briefly meet Ernest Fenollosa and his second wife Mary in Tokyo, but his most important personal encounter during his trip to Japan would be with the Austrian artist Emil Orlik.  The two would frequently travel and go out together; one of Bosch Reitz’s diary entries relates a trip that the pair took to a Japanese paper-maker.  Orlik would eventually teach Bosch-Reitz the technique of carving and printing woodblock prints in the Japanese manner and, at the end of 1900, Bosch Reitz would produce his first (and only surviving) woodblock print, “Japanse Turin (Japanese Garden).”  Bosch Reitz would describe in detail in his diary not only what materials it required, what tools he used, and how they were employed, but also included explanations of printing techniques such as bokashi, embossing, burnishing, and the use of metallics which were not involved in his own print.  It is unclear if Bosch Reitz made any further print designs.  One Dutch reference I’ve tried to translate seems to suggests that he did but that they were stolen along with most of the paintings that Bosch Reitz did while in Japan shortly before he left the country. 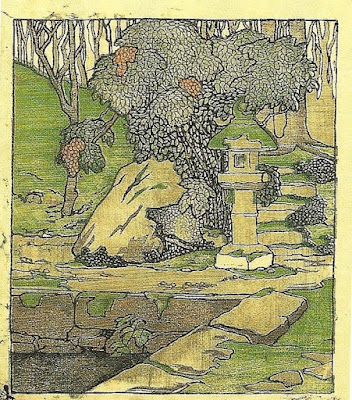 
Several years late, Bosch-Reitz would recycle his garden print for a 1907 meeting announcement for the Société des Amis de l'Art Japonais.  As indicated on the announcement, the impression of the print itself was one that Bosch-Reitz made when he was in Japan. 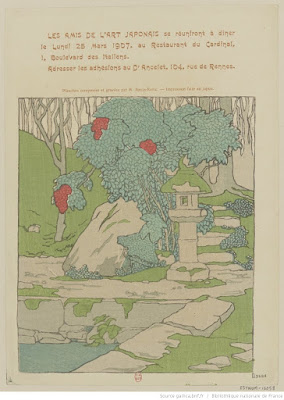 Back in Europe, Bosch Reitz would continue to comprehensively study Asian art, especially Oriental ceramics in European museums.  The outbreak of WWI prevented him from accepting a cataloguing job at the Louvre, but in 1915 the trustees of the Metropolitan Museum of Art in New York City established a Department of Far Eastern Art and appointed Bosch Reitz as its curator.  He would remain at the Met until his retirement in 1927, at which point he returned to Holland and resumed his painting career. 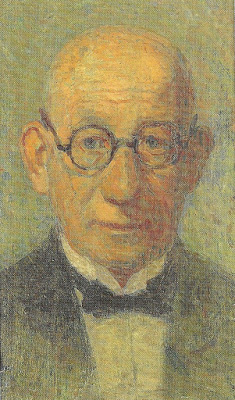 By my calculation, Bosch Reitz is the third Western artist to both visit Japan and make Japanese woodblock prints, following Emil Orlik and Helen Hyde.  Needless to say, his rare “Japanese Tuin” print is one of my holy grails for my own print collection, even though I’m not sure that any copies exist outside of the Bosch Reitz family’s collection.

I do, however, have something else in my collection with a Bosch Reitz connection.   In 2004, for my birthday, I bought the following print by Hashiguchi Goyō from the Scholten Gallery.  “Yabakei no Ame” was Goyō’s first self-published commercial print after his one-off experience with Watanabe Shozaburō in 1915.  Goyo designed prints for various books and magazines both before and after his collaboration with Watanabe, but they were smaller in size and scope and not specifically targeted to fine print collectors.  It is, in my opinion, Goyō’s finest landscape print by an artist primarily known for his female portraits, and was issued after he had spent several years studying ukiyo-e and overseeing with Kiyokata Kaburagi a twelve volume set of recarved ukiyo-e prints that were the finest reproductions of their time.  Goyō’s debt to Ando Hiroshige in this print is palpable.  It may not be entirely clear from this image, but the rain in the print is achieved with the use of silver mica.  (I also have a variant of this design in my collection printed in a more muted color scheme without the mica in the rain.) 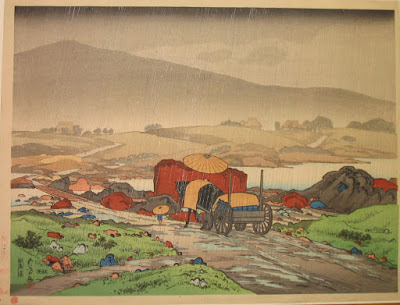 The illustrated print happens to be a rare, numbered life-time impression (#23).  The print also bears a second cartouche bearing the name of the carver (Takano Shichinosuke) and printer (Somekawa Kanzo).  Later (posthumous) printings by someone other than Somekawa Kanzo necessarily lack this cartouche.  This particular copy also contains a prior collector’s seal that employs a stylized “B” and “R” in a circle.  At first, I was unable to track this seal to any particular collector.  Thanks to Matti Forrer’s article in Andon on collectors’ seals, however, I was able to determine that it was very similar (though not identical) to Bosch-Reitz’s collector seal.  Then, quite by accident, looking through an old Hotei Japanese Prints catalog that turned out to contain several prints from Bosch Reitz’s collection, I found the identical collector’s seal, resolving the question of provenance once and for all.  (As it turns out, Chris Uhlenbeck, who runs Hotei, had sold my print to Rene Scholten.)

Chris tells me that Bosch Reitz also owned a copy of Goyo's other 1918 print "Kesho no onna," that he sold on behalf of the heirs to the Rjksmuseum in 1999. 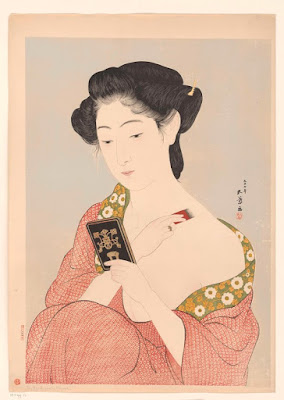 At that point in time, I was not particularly familiar with Bosch Reitz’s career but, after subsequent research, it makes a lot of sense.  The bulk of the Met’s Japanese prints were acquired during Bosch Reitz’s tenure, including those sold by Frank Lloyd Wright in 1918 and 1920.  Frank Lloyd Wright was a major Japanese art dealer in the early decades of the last century, using such sales to supplement his income from architectural commissions as well as to help finance his own ukiyo-e print purchases and extravagant lifestyle.  Goyō’s Yabakei print was made in March 1918, and Wright was one of Goyō’s closed friends in the foreign community in Tokyo at that time.  (Wright also designed the poster displayed at the entrance to a commemorative exhibition of Goyō’s work in October 1921.)  It therefore seems to me extremely likely that Bosch Reitz acquired my print directly from Goyō via Frank Lloyd Wright sometime in the 1918-1920 time period.  Presumably, he acquired his copy of  "Kesho no onna" around the same time.  While Bosch Reitz would never have purchased such “contemporary” shin hanga prints for the Met’s collection, it is clear that he recognized that they were exceptional prints in their own right and worthy of inclusion in his own print collection.

Of course, all of this is merely supposition based on the provenance of the print.  Art historian and scholar Julia Meech has said that there is no evidence that Frank Lloyd Wright ever owned any prints by Goyō.  Bosch Reitz revisited Japan several times, including a trip circa 1925, and so he could have purchased the print there four years after Goyō’s death, or from some other dealer in the United States or Europe.  But I find it to be a persuasive theory all the same.  And it pleases me no end to know that there is a connection between Bosch Reitz and Goyō, Orlik, and possibly Bartlett, three of the artists whose work is among the most prevalent in my own art collection.

For further reading about Bosch Reitz, I recommend the following sources:

If a comment box does not appear below, click on this link instead:  http://easternimp.blogspot.com/2015/09/the-bosch-reitz-experiment-holy-grail-1.html
Posted by Darrel C. Karl at Sunday, September 06, 2015