Back in the summer of 2015, I wrote a post about the prints of Elizabeth Keith that were omitted from the Miles catalogue.  One of the prints originally included in that post was an unsigned woodblock print that Robert Muller donated to the Sackler Gallery called "East Gate. Seoul" with its authorship not illogically ascribed to Keith. 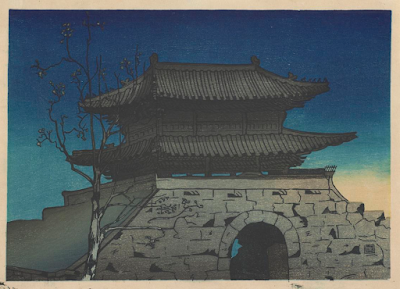 Eight months ago, a reader wrote in to say that she had a signed copy of that print but that signature on her copy looked like "M Kennedy," rather than "Elizabeth Keith."  I asked if she would send me an image of it to me.  She evidently tried, but the image never made it to my mailbox, and I frankly forgot all about it.  Two months ago, however, the dealer Anders Rikardson notified me of an upcoming auction in which another copy of this print was being offered for sale.  I was able to win this print, and it is indeed signed by a "M Kennedy" and bears an inscription "Tō Dai Mon" (East Gate) Seoul. Korea. 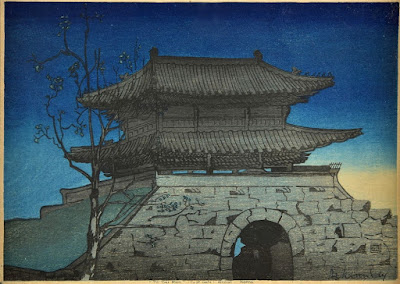 Close-up of the signature

Close-up of the title inscription

This print also bears a "MK" seal printed in the lower right of the image.  I had completely overlooked the presence of this seal in the unsigned copy above because it tended to blend into the stonework, but it should have clued me in that that print was not by Elizabeth Keith.

Anders Rikardson informed me of another "M Kennedy" print that came up for sale last year.  Like "Tō Dai Mon," it also features a Korean scene.  Since it bears a 1926 date, it is only logical to assume that "Tō Dai Mon" was made around the same time.  Indeed, that would be entirely consistent with Kennedy having been inspired by Elizabeth Keith's earlier 1920 print of the same subject. 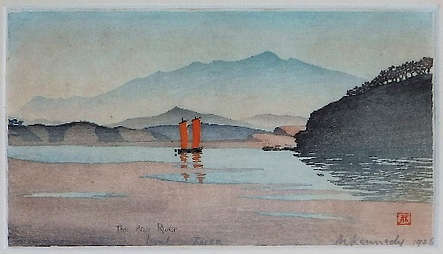 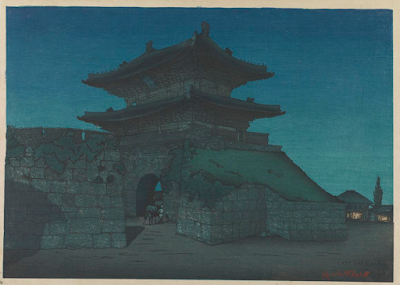 So who is "M Kennedy"?  Other than someone who evidently traveled to Korea in the mid-1920s, I've been unable to identify this artist.  Both Anders and I agree that the printing is sufficiently skillful such that Kennedy probably used professional printers in Japan or Korea to print his or her prints.  (Note also that the Japanese name for the gate is given in the inscription, rather than the Korean name "Dongdaemun.")  Given that both Kennedy prints turned up in auctions in England, Rikardson also postulated that Yoshijiro Urushibara might have been involved in the creation of the print.  While I can't rule that out, there is no record of Urushibara having collaborated with an artist named Kennedy, and the print lacks Urushibara's seal or his pencil signature, at least one of which are usually present on most of Urushibara's print collaborations. 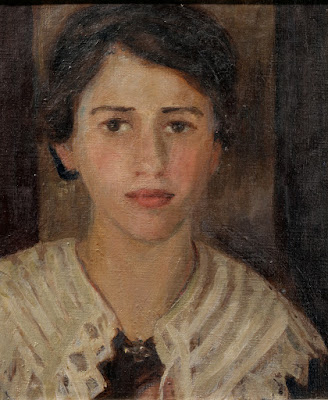 
The best guess that I've been able to come with is Leta Marietta Kennedy (1895-1986).  Born in Pendleton, Oregon, Kennedy studied at the Portland Art Museum School and then obtained her B.S. at Columbia University's Teachers College, where she studied with Arthur Wesley Dow and Minor White.  While it is unclear if she actually studied woodblock printmaking with Dow, that certainly was possible, and I have to believe that, at a minimum, she had some exposure to Japanese prints while at Columbia.  In 1922, Kennedy returned to Portland, where she joined the faculty of the Portland Art Museum School, established a program of study in commercial and graphic design, and also taught a course in ceramics.  She remained a fixture at that school until her retirement in 1971.

In addition to painting and making ceramics, it is known that Kennedy made woodblock prints, etchings, and lithographs, winning prizes in 1938 in exhibitions held at both the Northwest Printmakers and the Seattle Art Museum. Although I've found no evidence that she ever traveled to Asia, is it not difficult to imagine a budding Oregon printmaker making a trip to Japan and Korea in the mid-1920s, a few years after graduation. 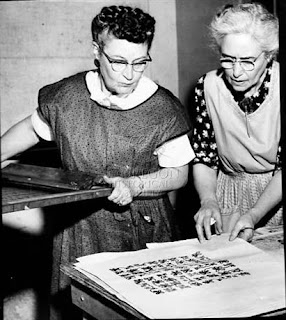 Mrs. Piazza lifts silkscreen to check proofsheet as her teacher
Leta Kennedy looks on at Museum Art School (November 1957)
Courtesy of the Oregon Historical Society
(photograph)
Of course, there's still the question of why, if the designer of the Korean prints was Leta Kennedy, she signed her prints "M" Kennedy.  Certainly, it's not unheard of for female artists to hide their gender in order to be taken seriously.  And there is no letter L in the Japanese language, which could explain why she defaulted to using the initial of her middle name.  But Lilian Miller felt that no such pretext was necessary with her name or her prints.  Moreover, I've been unable to locate any of Leta Kennedy's known woodblock prints or etchings, and her lithographs are stylistically unlike the Korean prints at issue (and appear to be signed in a different hand).  So,while she originally was a credible guess on my part, there simply is not any hard evidence at this time to support such a conjecture that Leta M. Kennedy is "M Kennedy." 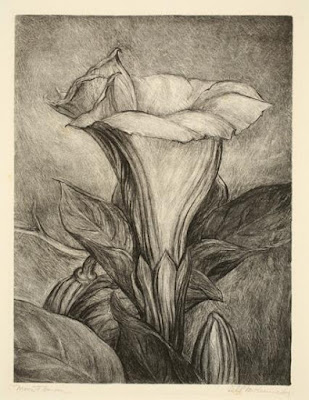 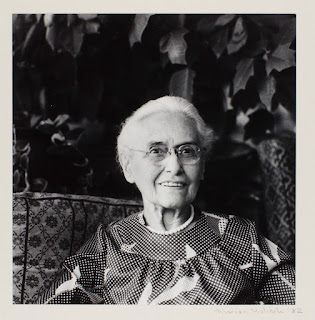 I've also found the following woodblock print for sale on eBay.  The seller says it's by another unknown "M. Kennedy," although it is possible to read the signature as "H. Kennedy."  In any event, the signature on this print doesn't match that on the Korean prints either.  (The letter "E" is Kennedy's Korean signature looks more like more like a slanted epsilon (ε) rather than a traditional lower case latin "e." 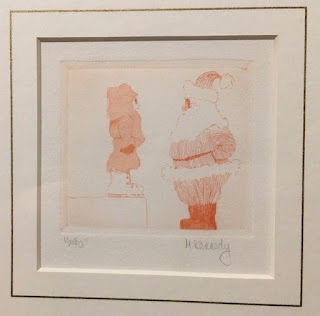 If anyone is able to identity of the artist of the two Korean prints shown above, I would be grateful if you'd let me and my other readers know.

If a comment box does not appear below, click on this link instead: http://easternimp.blogspot.com/2018/04/the-kennedy-mystique.html
Posted by Darrel C. Karl at Tuesday, April 17, 2018