The Charleston Renaissance Part 2A: The Woodblock Prints of Elizabeth O'Neill Verner

A year ago, I posted a piece about Alice Ravenel Huger Smith’s printmaker role in South Carolina’s Charleston Renaissance.  It is only fitting that the next Charleston printmaker to be discussed here is Elizabeth Verner (1884-1979), since Smith was Verner’s teacher and mentor. 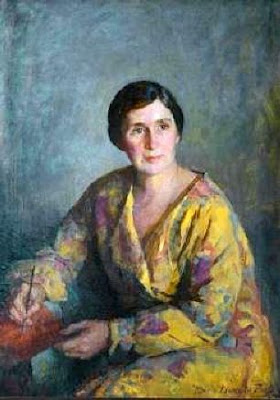 Born Elizabeth Quale O’Neill, Verner was a lifelong Charlestonian.  Her paternal grandparents were Irish Catholic immigrants, and her father was a rice broker who, it seems, never fought for the Confederacy because his parents sent him to France to study during the Civil War.  As a consequence, convent-educated Verner was decidedly not a member of Charleston’s former slave-owning Episcopalian aristocracy who would become Verner’s patrons.  Verner’s vision of Charleston, however, understandably appealed to members of Charleston’s elite society because it presented an affectionate, if somewhat nostalgic or romanticized, view of historical Charleston while, intentional or not, arguably continued to reinforce certain 19th century social and racial hierarchies. 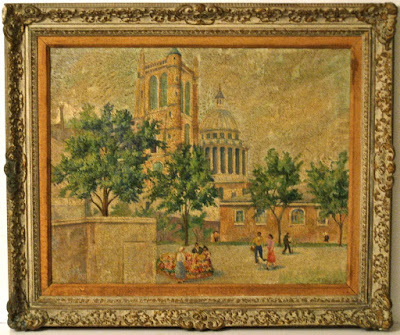 In 1901 at age seventeen, Verner was sent to live with relatives to attend the Pennsylvania Academy of Fine Arts in Philadelphia.  Her most important teacher during her two years at the academy was Thomas Anshutz, a proponent of Thomas Easkin’s esthetic of realism. She then taught art in Aiken, South Carolina before returning to Charleston.  In 1907, she married E. Pettigrew Verner, with whom she had two children (and for whom she converted to Presbyterianism).  Familial duties necessarily precluded a full-time career as an artist while her children were young, but starting in 1910 she began sharing a studio on Atlantic Street in downtown Charleston with the miniature portraitist Leila Waring.  On Sundays, Verner and Waring, along with Alice Smith, and Anna Heyward Taylor (whose nearby studios were on the same street) would invite guests to go from house to house to have tea and to view their latest works.  Verner’s medium at this time was primarily oil painting. 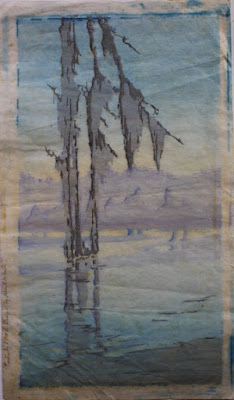 The details are unclear, but at some point Verner learned the rudiments of woodblock carving and printing from Alice Smith.  She also appears to have met Helen Hyde and Bertha Jaques when they visited Charleston prior to the end of WWI.  I’m speculating, but Verner's woodblock prints were likely made in the period between 1918 and 1925.  Verner’s grandson has a copy of Alice Smith’s 1918 print “Mossy Tree” which was printed by Verner.  Putting to one side its poor state of physical preservation, this print pales in comparison to the one printed by Smith herself.  While Verner's use of bokashi is not bad, it clearly lacks Smith’s finesse, and the printing at the print’s borders is particularly crude.  Still, everyone has to start somewhere. 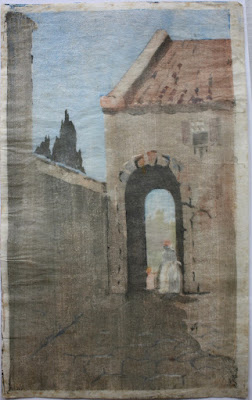 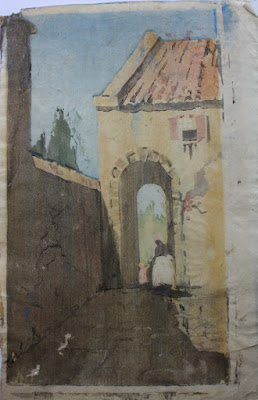 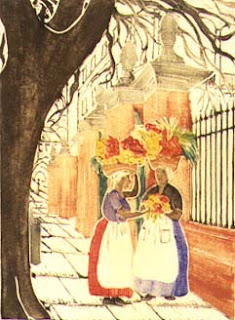 Garden on the Heads! (c. 1925) by Anna Heyward Taylor
Courtesy of the Greenville County Museum of Art
(colored woodblock print)

Verner would go on to produce at least two original woodblock prints of her own design.  The first, depicting an African-American woman with a young child in a building archway.  This print exists in at least two states, showing Verner’s experimentation with the use of different color blocks.  The precise location in Charleston is unknown to me, but perhaps a reader with some familiarity with the buildings and streets of that town might be able to identify it for me.  The subject matter and treatment is reminiscent of certain white-line prints made by Anna Heyward Taylor around the same time.  (It's also entirely possible that she obtained carving and/or printing advice from Taylor as well as Smith.) 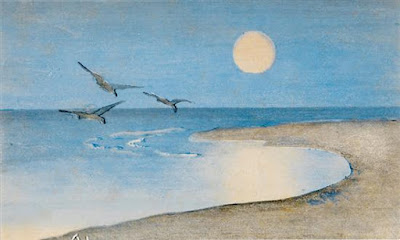 Verner’s second woodblock print is a seascape.  It is a much more mature work showing her growing proficiency in printing woodblocks.  While lacking the power of Alice Smith’s compositions, it exudes a quiet beauty and a sense of tranquility.  Based on this design, I think it’s a shame that she didn’t pursue woodblock printmaking further.  (If anyone is aware of any other Verner woodblock print designs, please let me know.)  I suspect, however, that she, like countless other woodblock printmakers before and after her, discovered that making woodblock prints is a laborious, time-consuming endeavor, and not a particularly lucrative one.  She may have also wanted to avoid competing with Taylor's neighboring studio for business, and instead decided to carve out a separate niche of her own in the Charleston art community. 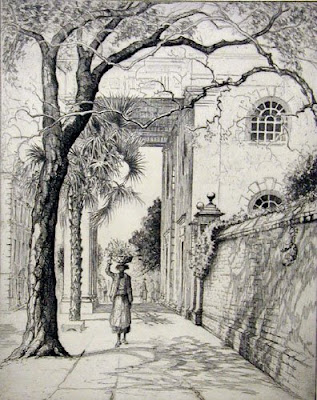 In the Shadow of St. Michael's, Charleston (c. 1928) by Elizabeth O'Neill Verner
Courtesy of the Gibbes Museum of Art
(etching)

Alice Smith learned etching from Gabrielle D. Clements, who spent the winters between 1916 and 1920 in Charleston, and from Ellen Day Hale, who also visited Charleston during that time period.  (The subject of etchings likely also came up during Hyde’s and Jaques’ visits as well.)  Smith, in turn, taught etching to Verner in 1922 and to several other local Charleston artists.  In 1923, Smith spearheaded the creation of the Charleston Etchers’ Club, whose founding members included Smith, Verner, Clements, Hale, Waring, Minnie Mikell, Antoinette Rhett, Alfred Hutty, and John Bennett..  Hutty secured an etching press for the club, which was set up in the Charleston Museum. 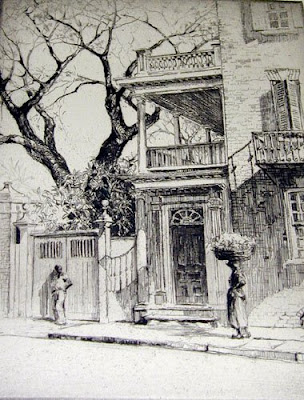 Verner’s life, however, was soon turned upside down when her husband died unexpectedly in 1925, leaving Verner a forty-one year old widow with no money, a mortgage, and two adolescent children to support.  Printmaking was no longer a pastime for Verner; she became a full-time professional etcher out of necessity, one who, in her own words, “had to work 14 hours a day for 10 years and I did.”  In 1926, she purchased her own press, which allowed her to work and print in her own studio.  Her mentor Alice Smith, a descendent of one of South Carolina’s most affluent antebellum families, was particularly helpful during this period, sending her clients to Verner’s studio and regularly sending out Verner’s etchings along with her own watercolors for exhibition to galleries, museums, and art professionals around the country. 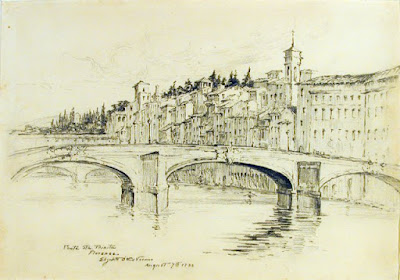 Over the course of her career, Verner would create over 260 prints in editions that typically numbered eighty or more impressions.  Multiple states exist for many of her etchings, and one occasionally can find proofs with additional handworking in pencil.  Most were scenes of Charleston and the surrounding Lowcountry,  but she also received commissions to etch or sketch West Point, Mount Vernon, Williamsburg, Harvard Medical School, and Princeton University, among other venues.  She also traveled to Europe, the Caribbean, and Mexico, which provided her with foreign subjects to draw, some of which were used to illustrate her 1946 book Other Places.  While in London in 1930, she continued to study etching at the Central School of Art. 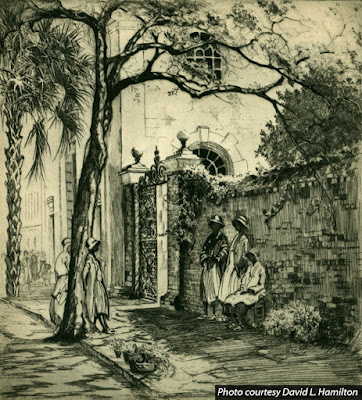 Springtime in Charleston (1936) by Elizabeth O'Neill Verner
Courtesy of David L. Hamilton
(drypoint)
Verner remarried in 1932 but it was a short marriage, as her second husband died three years later.   In 1933, she stopped making etchings, but continued to make drypoints up until the end of 1938.  The fact that her printing press had been damaged in a move to a new studio on Tradd Street may have played a part in this decision to stop making prints, not to mention the increased competition she was facing from another Charleston etcher, Alfred Hutty.  But with her children now in their late twenties and early thirties, Verner no longer had a family that she needed to support and was at liberty to pursue other artistic passions. 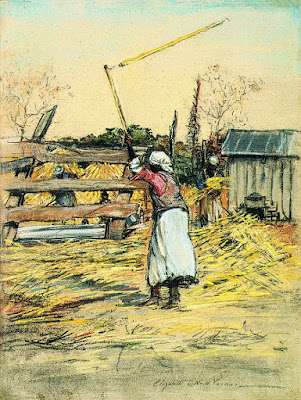 In 1934, Verner began to work with pastels, although her earliest pastels were experimental and unsuccessful.  By late 1937, however, she had perfected a process to make what she called “Vernercolors.”  Verner would glue raw Japanese Imperial silk to composition board panels and, while the silk was still wet, she would begin to draw.  After it dried, she would apply still more pastel to the silk.  Her favorite subject for these pastels were the African-American flower sellers found on Charleston sidewalks.  Although street vendors appeared regularly in Verner’s etchings, they tended to be shadowy, faceless figures.  Verner’s pastels, however, are realistic portraits of actual flower-women.  They were compensated for their time as models, and sometimes were named in the finished works.  Verner would continue to make such pastels well into her eighties. 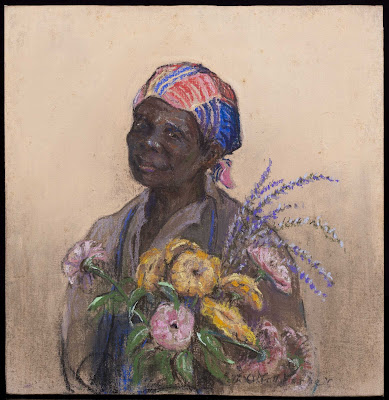 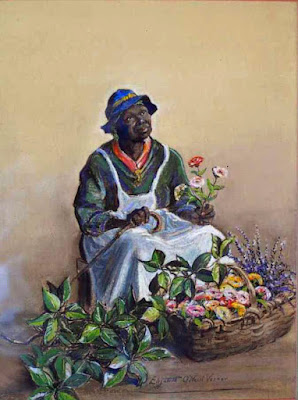 Throughout her career, Verner was a tireless promoter of the city of Charleston.  In 1920, she became a founding member of the Society for the Preservation of Old Dwellings.  She was a charter member and on the board of directors of Southern States Art League from 1922 to 1933.  When the city officials in 1944 threatened to pass an ordinance to ban flower vendors from the heart of Charleston’s historical district due to complaints about noise, litter, and overly aggressive sales tactics, Verner, then President of the Garden Club, led a civic protest in opposition, touting their tourist appeal and their utility as models for her own work.  The dispute was resolved by the city allowing Verner to personally issue a limited number of “good behavior” vendor licenses to such flower women.  Verner would author several books of her own about the city of Charleston illustrated with her drawings and etchings, including Prints and Impressions of Charleston (1939) and Mellowed by Time: A Charleston Notebook (1941).  In 1928, Doubleday published a Charleston edition of DuBose Heyward’s 1925 novel Porgy (later turned into the opera Porgy and Bess) illustrated with reproductions of Verner’s etchings. 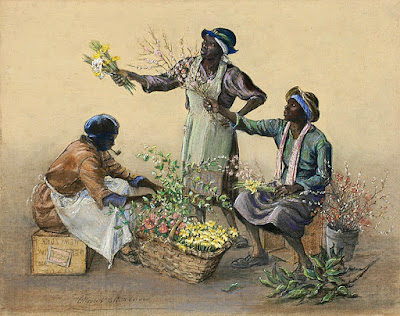 Symphony of Flowers (c. 1949) by Elizabeth O'Neill Verner
Courtesy of the Johnson Collection
(pastel on silk) 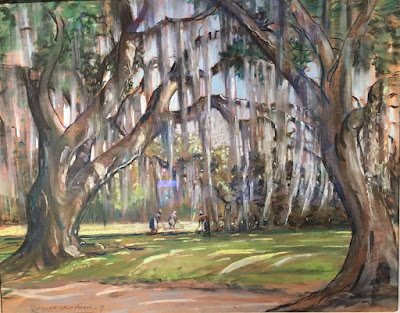 In 1967, Verner produced her last large pastel, Day Clean at Middleton Place.  In 1972, the “Verner Award,” recognizing her outstanding contributions to the arts, was named in her honor and has been presented annually by the Governor of South Carolina on behalf of the South Arts Commission.  Verner, the "Matriarch of the Charleston Renaissance," passed away at age ninety-five in 1979 in the city of birth. 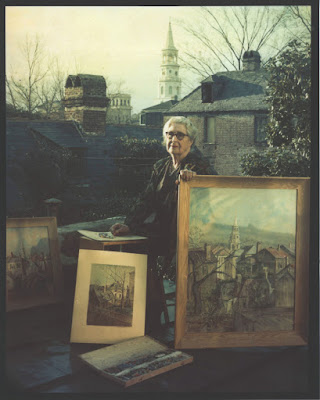 Readers who have read this far may wonder why I’ve devoted so much cyber-ink to Verner.   Her woodblock print career was transitory and limited, with only two journeyman efforts to her name.  Neither design features Asian subject matter or appears to have been influenced by principles of Japanese or Chinese art other than, perhaps, the use of asymmetry.  The reason, dear readers, is that Verner spent two months in Japan in 1937, the results of which will be detailed in my next post.  (To be continued.)