Curtain Up!: Japonisme Goes to the Theatre

Gilbert and Sullivan's operetta The Mikado premiered at the Savoy Theatre in London on March 14, 1885.  The Mikado certainly wasn't the first Western show with a Far Eastern setting, but it does appear to have been the first satire on the "Japan craze" in Victorian society (and certainly the most successful).  In its wake, there were countless plays, musicals, and operas set in the Far East (in Japan and China in particular).  The quality of their scripts may have been variable (even racist by today's standards), but their exotic sets and costumes made them highly theatrical productions that usually entertained audiences, most of whom had never been to Asia and had no way of knowing how accurate (or inaccurate) such depictions may have been. 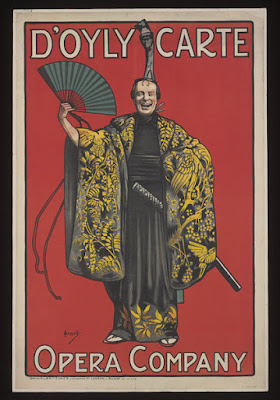 Then, as now, most producers used posters to promote their shows.  It therefore should come as no surprise that the graphic designers of posters for shows set in the Far East would also focus on their exotic settings or costumes in order to give the ticket-buying public an idea of what such shows were about.  These posters were usually lithographs, but some were woodcuts.  In fact, most of the earliest color posters in the Library of Congress's Theatrical Poster Collection are color woodcut posters of Gilbert and Sullivan operettas. 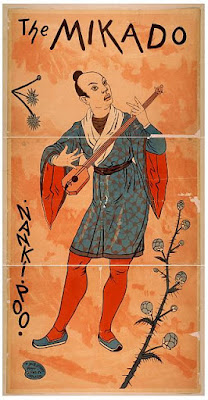 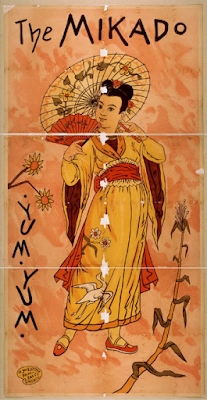 Two posters (c. 1885) for The Mikado by Jno. B. Jeffery Print.-Eng. Co.
Courtesy of the Library of Congress
(color woodcuts)


The 1890s produced two other monster hits that spawned famous posters.   The first, the musical comedy A Trip To Chinatown, with music by Percy Gaunt and book and lyrics by Charles H. Hoyt, opened at Madison Square Theater in New York City on November 9, 1891.  It ran for 657 performances, the longest-running Broadway musical up to that point in time, with a plot reminiscent of that of Hello, Dolly!  The characters in the show never actually go to San Francisco's Chinatown, however, which probably explains the lack of chinoiserie in the Broadway poster.  The famous poster for the London production, however, which opened at Toole's Theatre on September 29, 1894, features the silhouette of a Chinese man. 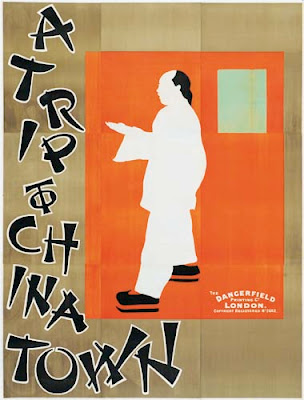 This poster was designed by The Beggarstaff Brothers, i.e., James Pryde and William Nicholson, whose use of clear outlines and large expanses of flat color was derived from Japanese ukiyo-e prints.  The green square on the upper right not only balances the composition but probably was intended to bear the title of the show, mimicking the title cartouches found in Japanese prints.  According to Nicholson, the printer, Dangerfield Printing Co, however, "mutilated" the poster by adding "some idiotic imitation of Chinese lettering placed around it to form a border."  These changes so infuriated the Beggarstaffs that they refused to put their name on the poster.  In 1899, the design was reproduced in a reduced size in Les Maîtres de l'Affiche.  Rare even in its day, this poster set a record when it fetched $43,700 at Swann's in 2004. 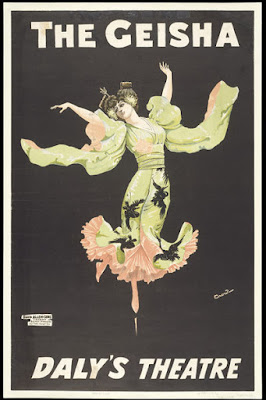 The other huge musical comedy hit of the 1890s was The Geisha with music by Sidney Jones, lyrics by Owen Hall, and a book by Harry Greenback (with additional songs by James Philip and Lionel Monckton, the latter of which also wrote songs for The Cingalee, a show set in Ceylon).  The Geisha opened at London's Daly's Theatre on April 25, 1896, where it ran for 760 performances, the second longest run of any musical up to that time.  Subtitled "A Story of a Tea House," The Geisha concerned a British officer who develops a friendship with the geisha O Mimosa San at the Tea House of Ten Thousand Joys.  His English fiance dresses up as a geisha called Roli Poli in an attempt to win him back and ends up being bought by a local Japanese overlord who intends to marry her.  Whereas Wilson's poster adopts the use of large areas of flat color from Japanese prints, Hardy's poster is Japonisme viewed through the lens of art nouveau. 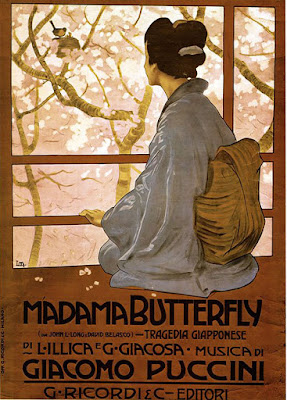 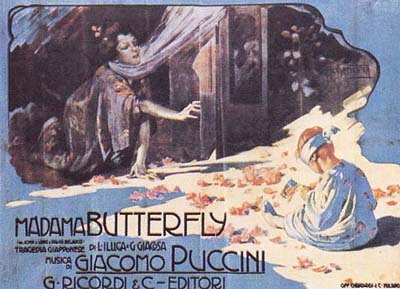 Giacomo Puccini's producers were able to get two of the most important Italian art nouveau poster designers of the day to create for posters for the initial February 1904 La Scala production of Madama Butterfly: Leopoldo Metlicovitz and Adolfo Hohenstein.  The opera was based on a one-act play by David Belasco that had premiered in New York City four years earlier, and incorporated music that Puccini heard performed by the Japanese actress Sadayakko when she appeared in Milan in 1902.  Despite Metlicovitz's particularly evocative poster design, the La Scala production was a disaster, only becoming a success after Puccini revised and recast the opera several months later. 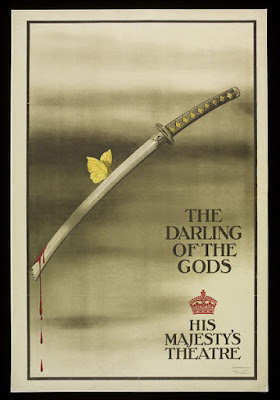 
I could go on and discuss shows such as Broadway to Tokio, San Toy, A Chinese Honeymoon, A Trip To Japan, and Chu Chin Chow, but I think you get a sense of the theatrical posters of the period.  Two other posters, however, are worth mentioning because the artists behind them also designed and/or made woodblock prints.  The first is Yoshio Markino's poster for the London production of The Darling of the Gods.   Because the artist was Japanese and the show was a drama, not a musical comedy, this poster has greater gravity than any of the earlier posters conceived by Western artists.  Although the design is spare, it is more in keeping with Markino's post-Impressionistic paintings than with the art nouveau movement.  You can read more about Markino and his involvement with this play in my prior post on Markino. 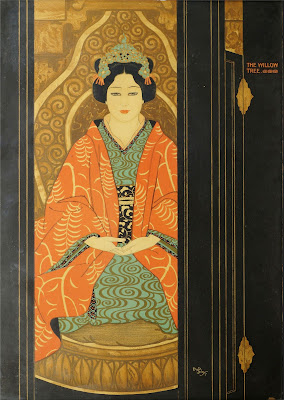 The noted book illustrator Edmund Dulac created the poster for the London production of the play The Willow Tree by J.H. Benrimo and Harrison Rhodes.  The play, which had debuted on Broadway earlier that year, opened  at London's Globe Theatre on October 22, 1917.  More than a few of the books and stories that Dulac illustrated had oriental settings, such as "The Nightingale" by Hans Christian Andersen.  Dulac was also friends with Laurence Binyon, a writer, critic, and Japanese art scholar who was the Keeper of Oriental Prints and Drawings at the British Museum.  For more information on Dulac's woodblock print output, I recommend this post on Haji baba's Modern Printmakers blog. 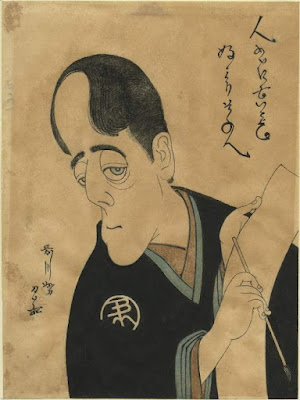 
To bring things full circle, one needs to remind oneself every now and again that artistic influence is rarely a one-way street.  A young Ishikawa Toraji (1875-1964) toured Europe circa 1902-1903 where he was exposed to European posters, especially those by art noveau painters like Alphonse Mucha. (Upon his return, Toraji would publish an article on Mucha in the literary magazine Myōjō.)  The posters featured in Les Maîtres de l'Affiche evidently made such an impression on Toraji that he made over 40 copies of various poster designs, especially ones by Mucha, Jules Chéret, and the Beggarstaff Brothers.  I'm convinced that Toraji's color sense, particularly his use of solid red backgrounds for his nude prints in the 1930s, can be directly attributed to his exposure to such posters.   I refer any readers who are interested in more information about Toraji's composition of his nude prints to a short article I wrote on the subject. 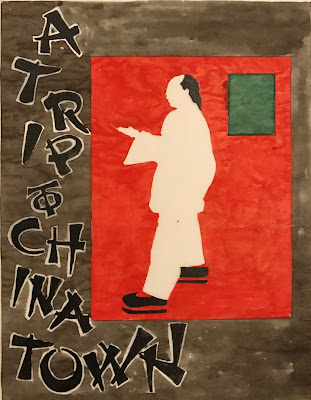 A Trip to Chinatown (c. 1902-1903) by Ishikawa Toraji (after the Beggarstaff Brothers)
Personal Collection
(ink drawing with watercolor)


If a comment box does not appear below, click on this link instead: http://easternimp.blogspot.com/2017/01/curtain-up-japonisme-goes-to-theatre.html
Posted by Darrel C. Karl at Sunday, January 29, 2017