A Jacobian Mystery: The Re-Proof Is in the Pudding

Last year, I acquired the following print of the Taj Mahal.   It's a familiar Taj Mahal woodblock print by Charles W. Bartlett, right?   Not exactly. 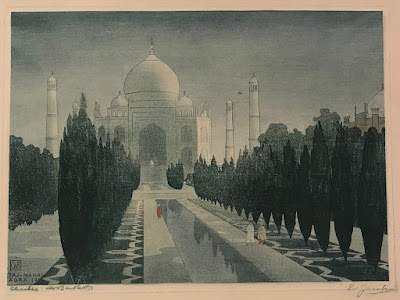 This is the Bartlett woodblock print published by Watanabe Shōzaburō: 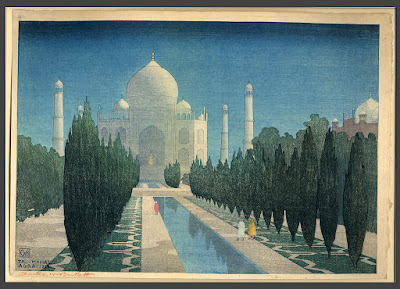 The colors are not exactly the same (and the blue color is somewhat faded), but that is the least of the differences.  The major distinction is that former isn't a woodblock print at all, as I'll get to in a moment.  Moreover, the plate size of the print is 10-3/4" by 7-7/8", making it considerably smaller than Bartlett's woodblock print, and the reduced image is slightly cropped at the margins.  The print is inscribed in the plate with the word "RE-PROOF" and is signed by E. Jacobi in ink in the lower right margin.  (A facsimile of Bartlett's name appears in the lower left margin.)  Bartlett's red © copyright notice is also missing in the print. 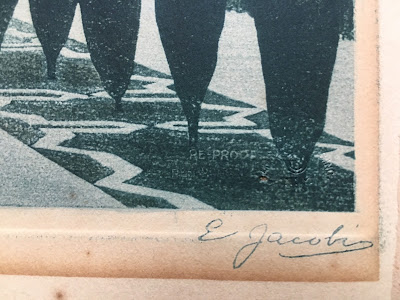 Close-up of the re-proof print by E. Jacobi

So who is "E. Jacobi"?  Some Internet sleuthing revealed that an E. Jacobi made re-proof etchings of etchings by the likes of J. Alphege Brewer, Vaughan Trowbridge, and Ferdinand Jean Luigini, but most of the links did not otherwise indicate the artist's first name.  Unfortunately, a couple of sites erroneously identified "E. Jacobi" as "Eli Jacobi" (1898-1984), a WPA artist known for his black and white linocuts during the Depression, which sent me off on a wild goose chase.  I was able to track down Eli Jacobi's nephew, but he was not familiar with any re-proofs done by his uncle.  Moreover, the time-line didn't jive.  While the Jacobi etching isn't dated beyond reproducing the 1916 date carved in the Bartlett woodblock, advertisements for other E. Jacobi re-proof etchings were published during World War I, which would have meant that Jacobi would have had to have taken up etching as a teenager.  Moreover, I learned from Eli Jacobi's nephew that Eli Jacobi spent the 2 years between 1915 and 1917 jailed by the Ottoman Turks in Jerusalem after he left Russia before becoming an art student at Bezalel art institute and then emigrating to the United States after he was expelled from Palestine, thus precluding his involvement with those re-proofs. 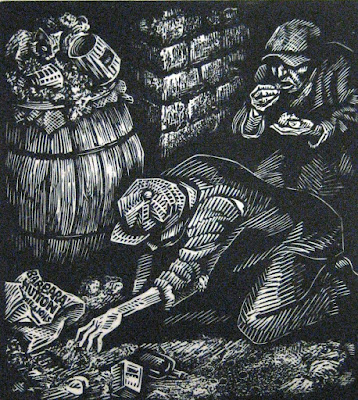 Around The Corner (c. 1939) by Eli Jacobi
Courtesy of Paramour Fine Arts
(linocut)

I then found this Jacobi re-proof etching of a T.F. Simon design, so I contacted my friend, Catharine Bentinck, who runs the premiere website devoted to Tavik Simon's life and work to see if she had any information about the mysterious E. Jacobi.  She, in turn, was able to direct me to Benjamin Dunham's impressive website devoted to J. Alphege Brewer's life and work to find the answers to almost all of my questions. 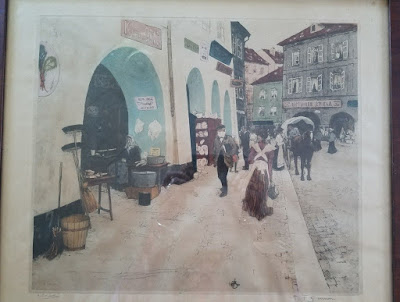 Thanks to Benjamin Dunham's research, I now know that "E. Jacobi" is Emil Jacobi (1853-1918), a Bavarian-born photographer who emigrated to the United States in 1878.  Although commonly referred to as "re-proof etchings" in the trade, what Jacobi produced were not etchings at all, but re-proof prints made after etchings.  In 1880, Jacobi was awarded an patent for an improvement in the "Process of Producing Phototype-Plates.  As described by Jacobi himself in a chapter of Frederick H. Hitchcock's The Building of a Book (The Grafton Press, 1906), he would photograph an original artwork to create a contact negative and used the contact negative to make a plate with the photo-gelatine process.  In this process, the areas exposed to light became hardened raised surfaces capable of holding ink in gradations.  Then Jacobi colored the plate for each impression, made the impressions, and signed them with his own name and a close imitation of the artist’s signature. 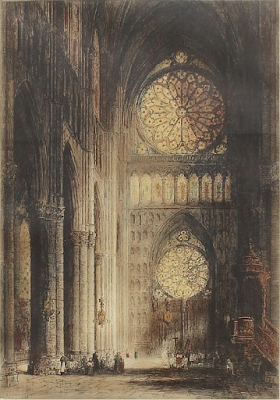 Durham says that it is unknown if Jacobi's reproductions were authorized by European artists during World War I as a way of maintaining sales when shipping across the Atlantic was undependable or simply as a means of expanding the market for such artists' works.  I doubt that they were authorized.  As Durham notes, it would have been an extra selling point if Jacobi could have advertised “authorized re-proofs,” but he didn’t.  Moreover, in the case of Bartlett, Jacobi would have had to have tracked Bartlett down, not in Europe, but either in Japan in 1916 or in Hawaii thereafter.  For more about Emil Jacobi, see Benjamin Durham's article on his J. Alphege Brewer website. 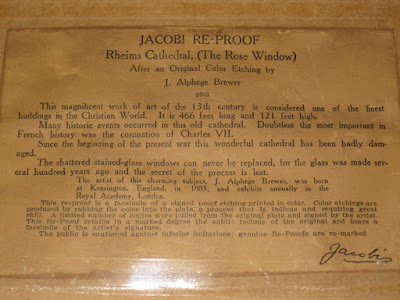 Jacobi's Taj-Mahal, Agra. 1916. phototype print is also seemingly unique in his output as it appears to be the only example of Jacobi reproducing a woodblock print, rather than an etching, with the photo-gelatine process.  Why Jacobi selected this particular Bartlett woodblock image for reproduction, however, is likely one mystery that will never be solved.  Bartlett himself would later create several etchings of the Taj Mahal, although none are identical in composition to any of his woodblock prints.

If a comment box doesn't appear below, click on this link instead: http://easternimp.blogspot.com/2018/02/a-jacobian-mystery-re-proof-is-in.html
Posted by Darrel C. Karl at Monday, February 19, 2018