I've written about Elizabeth Keith (1887-1956) before, most notably in my post about her uncatalogued prints.  This time, however,  I want to focus on two works, and the mysteries that surround the dates of their creation. 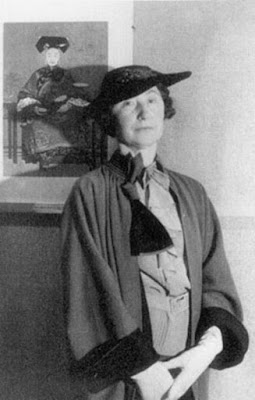 First up is a new woodblock print design by Keith (new to me, anyway, and I suspect to most of my readership as well).  This print recently turned up with little fanfare at an Eldred's auction in Maine this past summer. 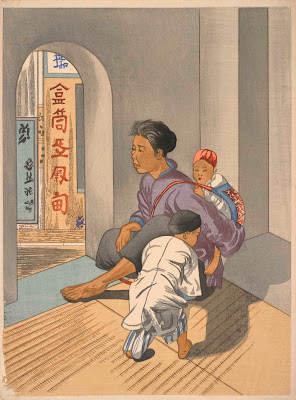 While this print is not found in Elizabeth Keith, The Printed Works (1991) by Richard Miles, it was known to Miles before his death in 2002.  The sale of this print was accompanied by a handwritten note by Miles dated March 20, 2002 and which read as follows:

[There is presumably a Miles note #1 about another rare print design, but it was not included with this print.]

Although this copy is neither signed nor sealed by Keith, even without the existence of the Miles note there should be no serious dispute as to the print's authorship from a stylistic point of view.  While Miles cites no factual support for his claim that this print was self-carved and printed by Keith. I also have no reason to dispute his conclusion.  It is unclear if Keith had problems trying to print the lower left hand corner of the design or if it suffered over the years from some post-printing abrasion.  In any event, while the overall quality of the printing is surprisingly good for an amateur, close physical examination reveals several minor printing flaws that one would not expect from the publisher Watanabe Shôzaburô's craftsmen.  The hands and feet of the figures in particular are rather crudely carved and there is an unfortunate heaviness to the overall design.  In the end, one can sense the intense effort Keith must have put into the carving and printing of this piece, such that the end result was more labor than a labor of love.

The mystery surrounding this print is the location depicted therein and when the print was made.  My primitive attempts to decipher the kanji in this print were unsuccessful, so I consulted John Carpenter, the noted Japanese art scholar and Senior Curator of Japanese Art at The Metropolitan Museum of Art in New York City.  He informed me that there was a reason why I couldn't read the kanji -- the characters are a Westerner's rather crude attempt to imitate the look of Chinese characters.  Individual words such as box, pipe, and phoenix were depicted, but collectively they formed a nonsensical sequence of characters.  (If Watanabe's people had been involved, one would also assume that the kanji would have been more professionally rendered.)  Although at that time I consulted Mr. Carpenter I hadn't yet seen the text of Mr. Miles' note and so I was unaware that he believed the family to Chinese, that was also the independent conclusion of Mr. Carpenter and his Chinese colleagues at the Met.  Indeed, the children's hats, the woman's collar, and the standing boy's jacket certainly made them look more Chinese than Japanese to me. 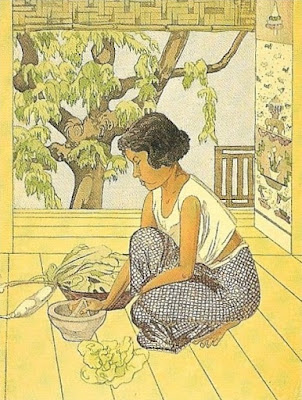 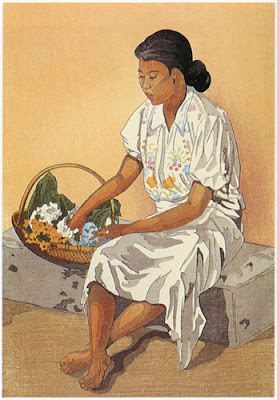 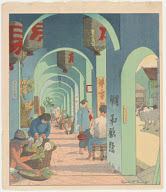 While China may be a likely location depicted in the print, that does not help much in dating the print.  Keith's first trip to China predates by several years her first Chinese print produced in 1919, and her output continued to feature Chinese landscape or figurative prints up to 1936 based upon earlier sketches or paintings.  The issue is further complicated by the fact that Keith both traveled to and designed prints in the 1924-1925 period depicting figures in Singapore, Malacca, and the Philippines, all of which had sizable Chinese populations and where Chinese signs would not have been entirely out of place.  Two other Keith designs that were never editioned (at least one which was also self-printed) and which similarly exist only in unsigned proofs were Filipino subjects printed in 1924.  Moreover, these two unsigned proofs, "Shy" and "The Flower Seller," stylistically also happen to be the closest prints in the Keith canon to this Chinese family scene.  The urban setting and clothes, however, suggest to me that Singapore or Malacca is the more likely venue.  Indeed, the archway in this print is reminiscent of those found in Keith's two Singapore prints. 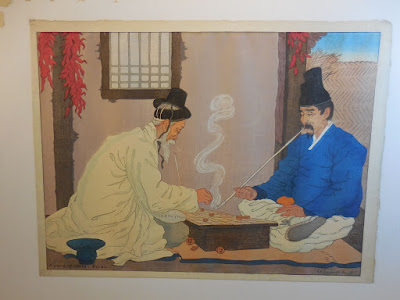 There's no mystery about the date of the next Keith print under review.  This print, depicting two Korean men playing "A Game of Chess," clearly bears a date "1921" in the image itself.  What's mysterious is the fact that Miles dates this print to 1936. 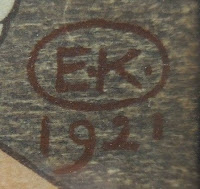 Close-up of the printed date for A Game Of Chess

One can find various copies of this print on the Internet which are said to dated "1936," and perhaps some of them are.  One wonders, however, how many people have blindly relied on the date in the Miles catalog without actually checking the date printed on their copies.  In all such copies I've found, the image's date was either too small or too indistinct to make out clearly, so I can neither prove nor disprove the existence of a 1936 printing at this time.  One can, however, find copies where the date "1924" is instead printed in bright red, such as on the copies at the Honolulu Museum of Art or the Jordan Schnitzer Museum of Art.  In fact, contradicting his own catalog entry, Miles inexplicably included a full two page illustration of "A Game of Chess" in his introductory biographical essay on Keith which clearly shows a discernible date of "1924" printed in bright red, a clear example of Homer nodding. 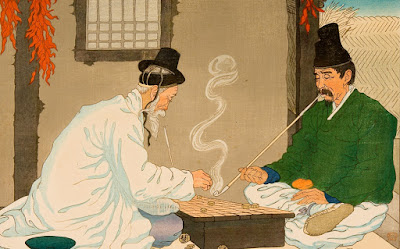 A Game of Chess, Korea (1924) by Elizabeth Keith
Courtesy of the Honolulu Museum of Art
(colored woodblock print; image is slightly cropped)

Close-up of the printed date on the HMA's copy

Whether or not a later "1936" printing exists, it is clear that the "1921" edition employs a different color scheme than that found in the "1924" edition.  The man on the right, for example, is wearing a green jacket in the 1924 edition, whereas it is blue in the 1921 edition.  If on-line color reproductions can be trusted (and they often can't be), I've seen various copies where the green jacket's color ranges from a light green to dark olive-brown color.  For a brief moment, I thought the blue color in my copy might have been explained by the yellow in the green pigment having faded due to exposure to sunlight, thereby turning the green jacket into a blue one.  (I've seen this happen on a print by Hashiguchi Goyo.)  But the 1921 edition also has a overprinting of yellow on the left man's white robe that is missing on the 1924 edition prints.  That yellow should also have faded if the yellow in the green pigment had faded, and it had not.  One will also notice other color differences as well, such as the colors of the mat, the game pieces, the left man's pants, the pot at the lower left, and the building wall. 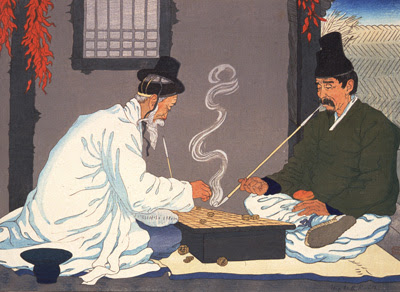 A Game of Chess, Korea (1924) by Elizabeth Keith
Courtesy of the Jordan Schnitzer Museum of Art
(colored woodblock print)

Given that the first two editions were spaced apart by three years, it is not particularly surprising that they differ in color, especially if different printers were involved in printing the prints.  The timing, however, of the editions raises another question.  Did Watanabe's blocks for this design survive the 1923 Tokyo earthquake that otherwise seemingly destroyed the blocks for practically all of Keith's earliest prints?  Or were the blocks for this popular design recarved after the earthquake?  I haven't been able to locate a copy of the 1924 edition in the Washington, D.C. area to physically compare with my own copy yet, so that must remain an open question for the time being. 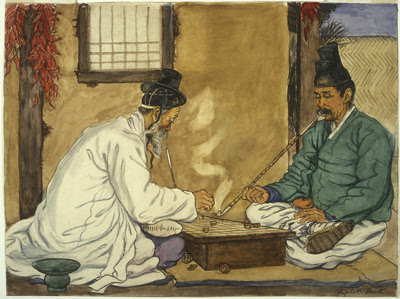 A Game of Chess, Korea (c. 1921) by Elizabeth Keith
Courtesy of the Jordan Schnitzer Museum of Art
(watercolor)

One more curious fact about this print.   Keith's original watercolor for this design depicts the man on the right wearing a green jacket, yet the 1921 edition of the print has the man wearing a blue jacket.  Why didn't the first printing of this print design reproduce the color scheme of Keith's watercolor?  Was this color change made by at Watanabe's direction without Keith's consent?  Did the color later revert to green in the 1924 edition at Keith's insistence to reflect her original intention? 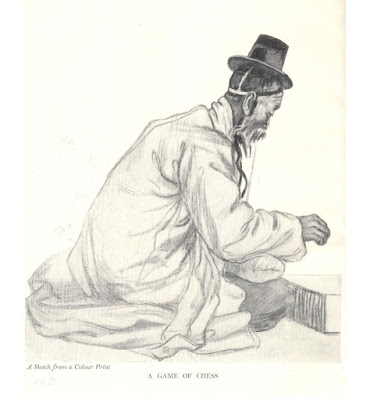 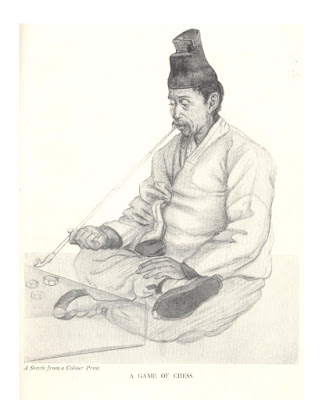 One thing is clear from my own modest research on Keith so far.  The Miles catalog, as helpful as it is, needs to be revised and updated.  In addition to including omitted print designs, further research is needed on the various states and/or printings of Keith's designs.  Miles often notes when a given design was known to be reprinted yet frustratingly fails to indicate to dealers or collectors how, if at all, those later reprints can be distinguished from the earlier printings.

If a reader has any light to shed on the issues raised in this post, please share them in a comment below or privately contact me at the address at the right top of the page. If a comment box doesn't appear below, click on this link instead: http://easternimp.blogspot.com/2018/09/elizabeth-keith-game-of-dates-part-1.html
Posted by Darrel C. Karl at Sunday, September 30, 2018