The Asian Autumn of Mrs. Burton

The life and career of Elizabeth Eaton Burton (1869-1937) makes an interesting contrast to that of Marguerite Gifford’s, discussed in the prior post.  Whereas Gifford was born and bred in what would have been relatively provincial Louisville, Kentucky during The Gilded Age, Burton was born in Paris and raised in Paris, Versailles, Nice, and Le Croisic in Brittany during the early part of La Belle Époque, occasionally traveling to such places as Italy, Switzerland, and even India.  She was the daughter of the artist Charles F. Eaton and Helen Justice Mitchell, both of whom were art students at the Sorbonne from prominent East Coast families.  One of her childhood friends was the younger sister of John Singer Sargent, whose watercolors Burton copied in her youth.  Burton attended boarding school in England in 1885 and in Dresden the following year.  In 1886, however, when Burton was 17, Charles Eaton decided to move his family to the United States and settled in sunny Santa Barbara, California on account of his wife’s ill health. 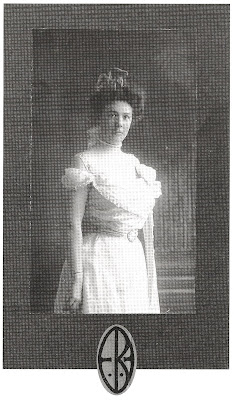 In December 1886, Burton meets her future husband, William (Billy) Waples Burton, an up-and-coming real estate developer, at a dance.  Together, the pair would become fixtures of Santa Barbara high society, attending balls, acting in local theatricals, organizing fundraisers for the new Cottage Hospital, etc.  (Japonisme was clearly all the rage at the time.   Burton’s husband attended a “Mikado” party in 1887, and there was a Japanese booth at the 1890 Trades Fair fundraising for the Cottage Hospital.  Santa Barbara also had its own Chinatown and Burton had Chinese house servants, so Asian as well as Spanish culture was never far away.)  Elizabeth and Billy would marry in 1893 and two children quickly followed.  So, like Gifford, Burton could have been content to have spent her middle years as a civic-minded wife and mother.  Burton, however, was very much her father’s child. 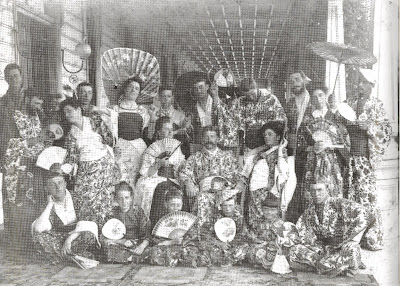 Mikado party at the Arlington Hotel, Santa Barbara (1887)
Mustachioed Billy Burton is seated at the center of the second row.

Upon settling in California, Charles Eaton established  himself as an Arts and Crafts designer, working in metal, leather, and glass, all of which he introduced to his daughter.  By 1896, Burton had opened up her own studio in Santa Barbara.  She applied for and received a patent for an ornamental leatherwork technique that she used on chests, screens, and furniture.  She also produced what were known as “shell lamps,” patinated brass or copper lamps decorated with Philippine window shell and/or pearl abalone.  By 1901 she had shows in both California and New York (which was praised in Vogue magazine), and she received favorable notices for her work at the Louisiana Purchase Exhibition in St. Louis in 1904.  Gustav Stickley visited Burton’s studio that same year and particularly praised her leather screens in The Craftsman.  In 1909 she won the gold medal at the Alaska-Yukon Pacific Exposition in Seattle, and the Burton family moved to Los Angeles, where she opened up a new studio. 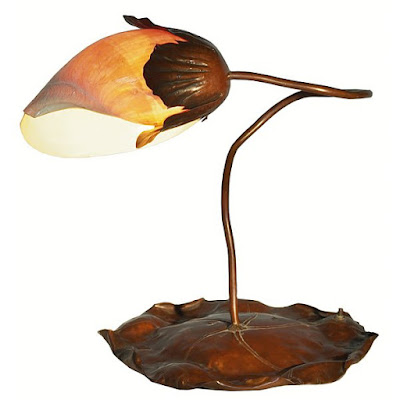 In 1920, however, Burton’s husband died of a heart attack, leaving her a widow at almost the exact age that Gifford was widowed (albeit a decade and a half earlier in time).  Like Gifford, two years later Burton decided to travel to Europe, spending much of her time in Paris and also in Brittany painting Breton peasant scenes.  Upon her return to Los Angeles, she lectured on her travels and published  a book about her time in Paris called “Paris Vignettes.”  In 1929, she became the president of the Alliance Français of Hollywood and subsequently was awarded the Palme Academique for her efforts in promoting French culture and art, the oldest extant civilian accolade awarded by the French Government.  Two more years were spent in France after her father died in 1930. 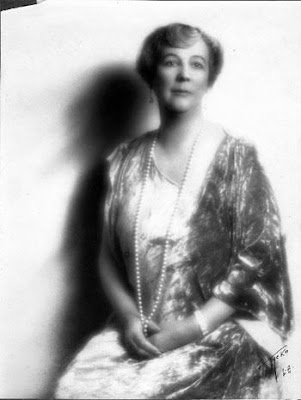 In 1933, Burton traveled to China and Japan to paint and to study woodblock printing.  She made watercolors of local scenes, temples, folktales, and a series of the attributes of Quan Yin.  A number of her watercolors were turned into woodblock prints by Japanese craftsmen.  According to Dan Lienau of the Annex Galleries, they were produced by the Tokyo publisher Kato Junji.  Her resulting watercolors and prints were displayed worldwide in a two-year solo exhibition in 1935-1936 that traveled from the Arlington Gallery in London to galleries in Peiping (Beijing), Shanghai, Tokyo, Los Angeles, and ending at the Schwartz Galleries in New York City.  Unlike Gifford, whose first trip to Europe and Asia would be the springboard to second act career as an artist, this traveling exhibition of her time in Asia would be Burton’s last hurrah.  She would pass away the following year after dictating her memoirs of her youth and time spent in Santa Barbara. 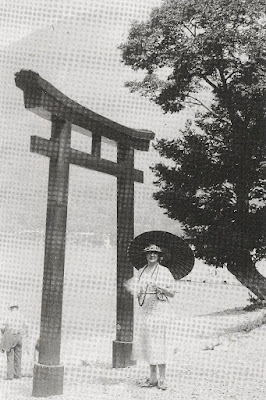 I’m aware of six woodblock prints designed by Burton, although it is possible that others were made.  Her watercolors translated well to the woodblock print medium, and at one of her paintings of a Japanese Shrine on Stilts contains cartouches with kanji inscriptions, which suggests that it also might have been intended to be turned into a print. 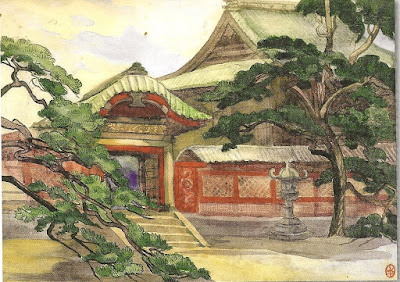 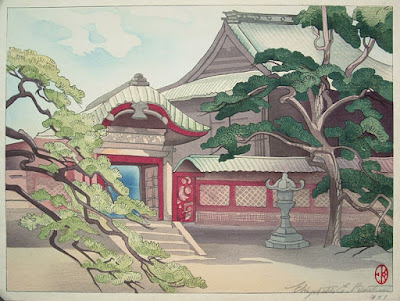 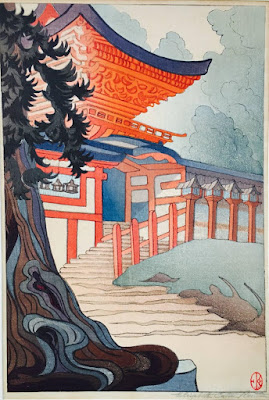 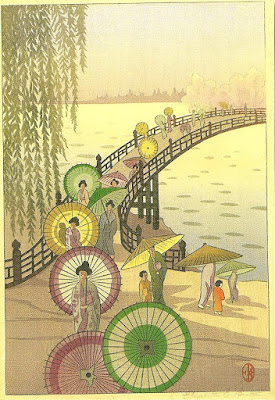 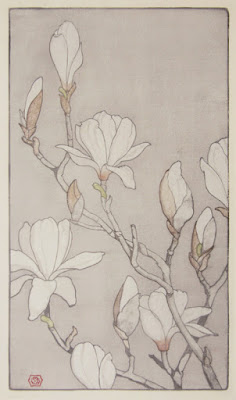 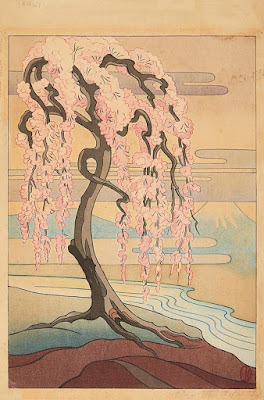 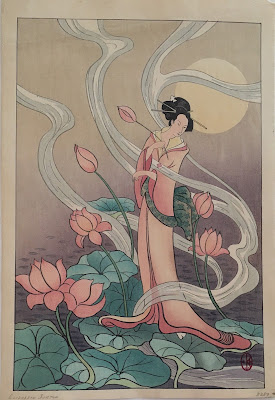 Burton's "Quan Yin" print is reminiscent of the print work of Bertha Lum.  Indeed, that goddess figures in a number of Lum's paintings and prints.  Lum would have been in Peiping in 1933, so it is entirely possible that the two might have met.  I wonder if they ever did. 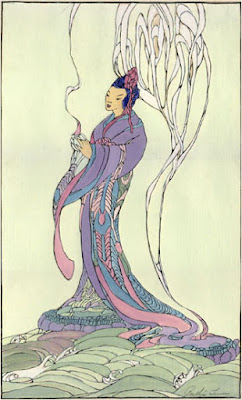 
If a comment box does not appear below, click on this link instead:  http://easternimp.blogspot.com/2015/08/the-asian-autumn-of-mrs-burton.html
Posted by Darrel C. Karl at Friday, August 21, 2015