About five months ago, I drafted a post about the California woodblock prints of Kakunen Tsuruoka with the assistance of the Kakunen's grandson, Doug Tsuruoka.  Coincidentally, around the same time, my friend Katherine Martin, who runs the Scholten Gallery in New York City, had been in contact with one her clients, Mrs. Haruno Tsuruoka, the wife of Kakunen’s son Shotaro (Doug Tsuruoka's uncle).  Katherine Martin acquired from her a preliminary watercolor for one of Kakunen's prints and some process material that she knew I would be interested in that immediately came in handy to further flesh out my post on Kakunen.  Sadly, Mrs. Tsuruoka passed away shortly after my post went on-line. 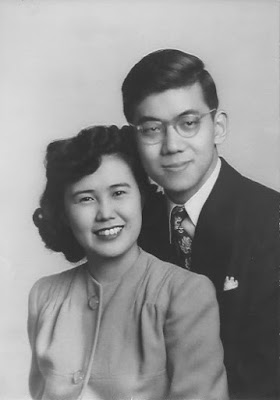 Recently, a heretofore unknown Kakunen woodblock print was discovered among the materials in Mrs. Tsuruoka's estate.  It depicts Half Dome, a 4,700+ foot granite crest at the eastern end of Yosemite National Park.  According to Doug Tsuruoka, Kakunen frequently took his family to Yosemite in his old Ford in the years before WWII, where he created pencil sketches and plein air watercolors.  This print was to be the first of a projected series of woodblock prints of Yosemite. 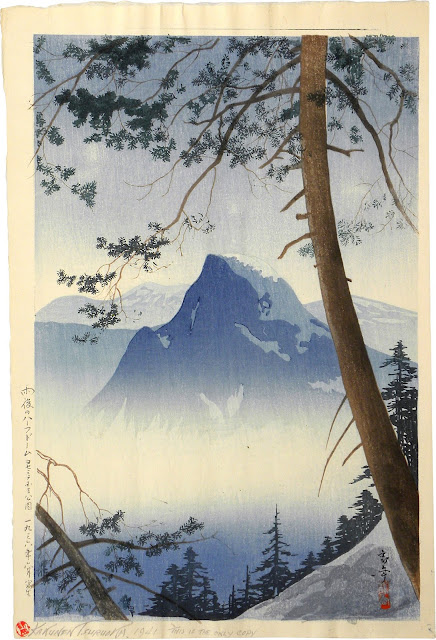 Interestingly, the date printed in kanji in the left margin of the print reads "Sen-kyuhyaku-sanjuroken-nen, rokugatsu shasei," which translates to "1936, 6th month, sketched."  Presumably this is the date of original watercolor sketch on which this woodblock print was based.  The print itself, however, bears Kakunen's handwritten notation "1941 This is the only copy."

Katherine Martin believes this to be a test print, and I have to agree with her.  For example, there is an uncleared black line in the top margin.  There is also a small registration problem along the upper right edge of the upper tree trunk, and the printing runs into the margins at various points, most noticeably with the tree limbs in the upper left margin.  These carving and printing flaws, combined with Kakunen's handwritten notation, leads one to safely assume that this design never advanced into production. 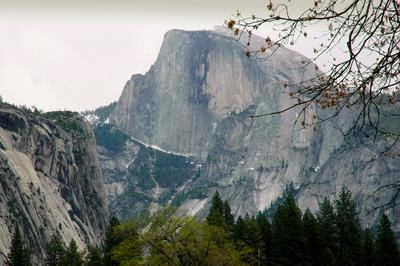 Why was this print abandoned?  If it was in fact made in 1936, then it was likely printed around the same time as Kakunen's "San Francisco City Hall in Night Fog" print, and perhaps was Kakunen's first woodblock print.  If so, I can only assume that Kakunen was not happy with the design.  However, it is more likely that it was printed in 1941, making it Kakunen's final woodblock print.  While Kakunen still may not have been satisfied with the print, the most plausible explanation for the abandonment of this design would be one of timing.  Japan's militaristic expansion into China and other countries in Asia and in the Pacific had been underway for several years by that point, stirring increasingly anti-Japanese sentiment in the United States and depressing interest in and sales of Japanese art.  Moreover, if the test print had been made in late 1941 (and I suspect it was), then the bombing of Pearl Harbor on December 7, 1941 and the Tsuruoka family's subsequent relocation would have made completion of this print impossible.

Cropped black and white photograph of a
portrait in oils of Kakunen Tsuruoka by Abel Warshawsky
Courtesy of Hanga.com from the Collection of Doug Tsuruoka

Kakunen's Half Dome print reminds me of woodblock prints by such contemporary print designers as Ito Yuhan and Tsuchiya Koitsu, all of which owe a perspective debt to Hiroshige. 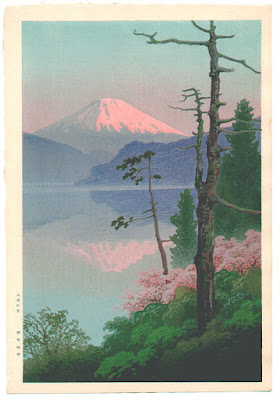 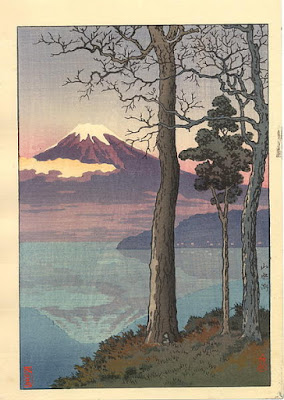 And, of course, the most prolific landscape print designer of the period, Kawase Hasui: 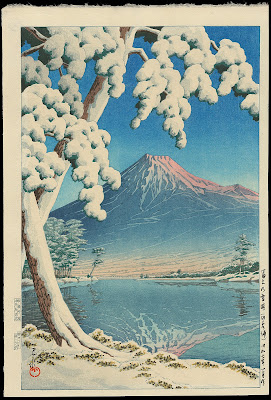 The subject matter of Kakunen's print may have also been influenced by the prints of another Japanese artist, Chiura Obata (1885-1975).  Obata emigrated to the United States two years earlier than Kakunen and also settled in the San Francisco Bay area.  While it is likely that the pair were acquainted with each other, I have not been able to confirm that two in fact ever met.  Like Kakunen, Obata and most of his family were interned during WWII (albeit in a different camp).  Although primarily a painter and a professor at Berkeley, Obata designed a series of woodblock prints in 1930, the majority of which featured scenes of Yosemite National Park. 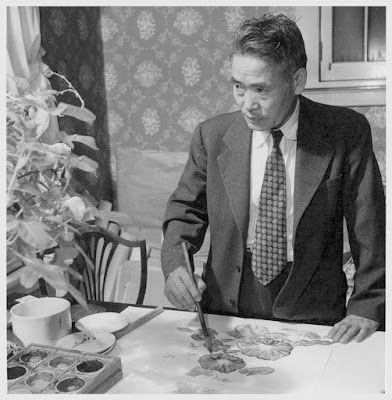 While Obata never made a print of the Half Dome, he did produce at least one watercolor featuring this Yosemite landmark. 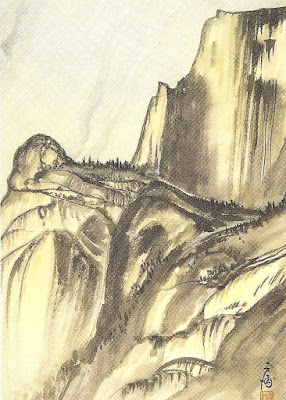 Half Dome (1937) by Chiura Obata
reproduced in Obata's Yosemite: The Art and Letters of Chiura Oabata
from His Trip to the High Sierra in 1927 (Yosemite Association 1993)
(sumi and watercolor on paper)

Several of Obata's Yosemite prints, however, feature a tall tree trunk in the foreground, usually with some Yosemite mountain backdrop. 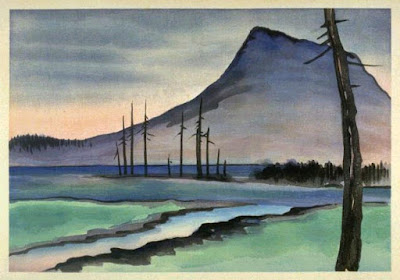 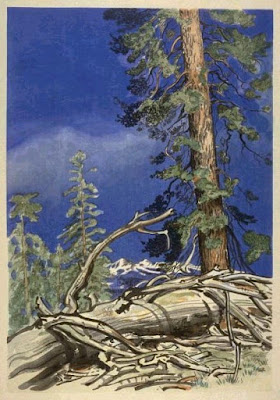 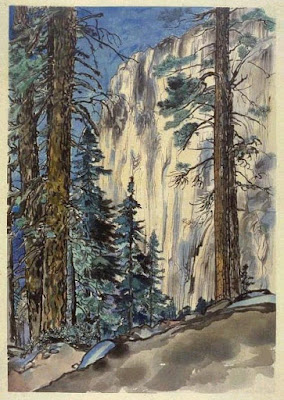 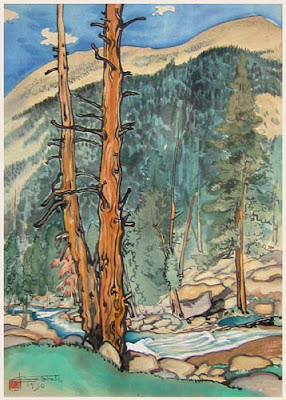 As can be seen, Obata's prints are very different in look and feel from Kakunen's prints, no doubt in part due to the fact that Obata used Takamizawa's carvers and printers whereas Kakunen used Watanabe's carvers and printers, but mainly because their painting styles were different.  Kakunen's Yosemite print has a very traditional Japanese sensibility to it.  The Half Dome could easily have been replaced with Mt. Fuji without changing the tranquil mood of the scene.  Obata's Yosemite prints, however, focus more on the natural wildness of the park, straddling the divide between realism and expressionism in the process.  There is also an undercurrent of loneliness and alienation in Obata's prints that is missing from Kakunen's more contemplative vision.  This, however, would later show up in Kakunen's internment camp paintings.  In light of those paintings, one can only wonder in what direction Kakunen's prints might have gone if he had continued to design woodblock prints after WWII, particularly ones depicting Yosemite Valley.

If a comment box doesn't appear below, click on this link instead: http://easternimp.blogspot.com/2017/11/kakunens-lost-yosemite-print.html
Posted by Darrel C. Karl at Sunday, November 26, 2017