Austrian artist Robert Philippi (1877-1959) attended the Vienna Academy of Fine Arts under Griepenkerl and Trenkwald and later the Vienna School of Applied Arts under Myrbach and Roller.  He was associated first with Austrian Secessionism and later turned to German Expressionism.  Until the mid-1920s, Philippi mainly used drawing, woodcuts, and etchings as his primary medium of expression, before increasingly concentrating on painting.  He also was a teacher of printmaking techniques, counting Egon Schiele upon his more famous pupils. 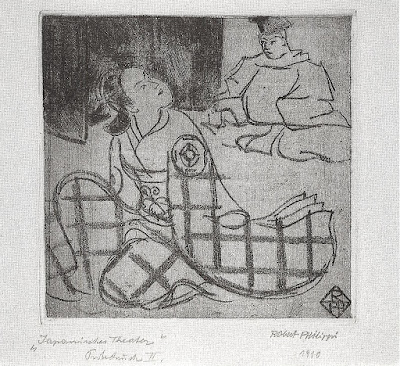 As far as I know Philippi never journeyed to Japan, although I would interested in learning if anyone is aware that he did.  Nonetheless, in 1910 he produced the above etching which, from the title, presumably depicts Japanese actors in a play. It must be relatively rare because I have yet to find an Austrian or German print dealer who has ever seen a copy.  Did Philippi attend a performance given by a Japanese kabuki troupe that visited Vienna?  Is the scene entirely imagined?  (My best guess is the latter.)

Whether real or imagined, one thing is clear.  Philippi must have seen and studied Japanese prints, in particular, prints by one of the Primitives such as Torii Kiyonobu I (c. 1664-1729), or Okumura Masanobu (1686–1764).   The woman's hairstyle and pose is typical of Japanese prints produced in the early 1700s (or even somewhat earlier). 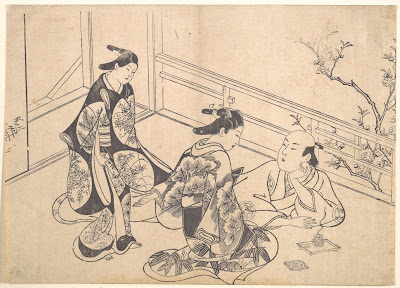 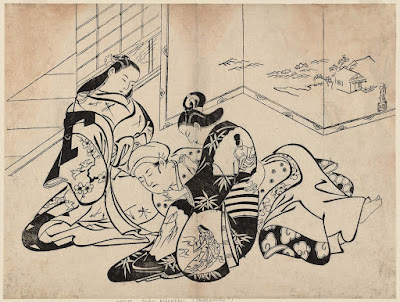 Observant readers will notice the stylized monogram "RPH" in the lower right of corner Philippi's "Japanisches Theater" etching.  I am not sufficiently acquainted with Philippi's output to know if it is unique to this print or if it appears on Philippi's other work from this time period.  His prints and drawings from his subsequent Expressionistic period of which I am familiar tend to use "R" above "PH" in plain block letters.  However, his particular monogram on this etching is highly reminiscent of (and likely influenced by) the stylized monograms adopted by members of the Viennese Succession Movement such as Gustav Klimt, Koloman Moser, Josef Hoffmann, Alfred Roller, Felician Freiherr v. Myrbach, and Emil Orlik. 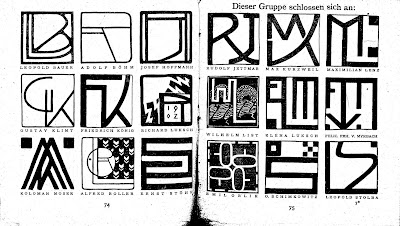 This Klinger-Beethoven catalog is well worth seeking out because it also has sixteen orange and black woodblock prints by Orlik, Moser, Myrbach, Karl Moll, Ferdinand Andri, Rudolf Jettmar, Friedrich König, Max Kurzweil, Maximilian Lenz, Wilhelm List, Elena Luksch-Makovsky, and Ernst Stöhr, an example of which is shown below. 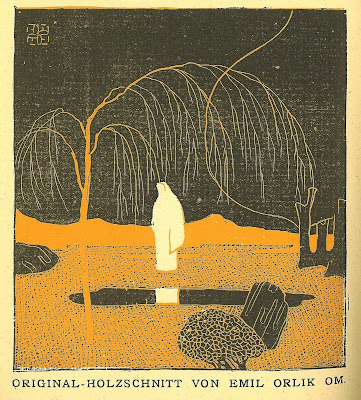 Thanks to the efforts of the late print dealer and friend Allan Wolman, I was able to obtain this counterproof for Orlik's print, the only counterproof I have encountered for any of Orlik's woodblock prints.  (Some black and white keyblock impressions of Orlik's woodblock prints exist, but that's a horse of a different color.)  In both prints, you can see Orlik's own Secessionist monogram in one of the upper corners. 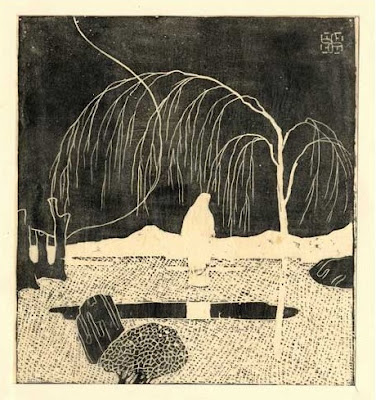 Did Philippi produce other Japanese-themed etchings, or was his "Japanisches Theater" etching a one-off?  I honestly don't know.  There's not a lot of information about Philippi on the Internet and, if there is a catalog raisonné for his prints, I have not as yet stumbled upon a copy.  But if a reader is aware of other "Japanese" works by Philippi, please let me know.

If a comment box does not appear below, click on this link instead:  http://easternimp.blogspot.com/2015/10/the-austrian-masanobu-holy-grail-2.html
Posted by Darrel C. Karl at Sunday, October 04, 2015