I came across some of Fritz Rumpf's books on Japanese woodblock prints when I first started to collect ukiyo-e more than two decades ago.  It was only recently, however, that I learned that Rumpf had also made one, possibly more, woodblock prints of his own.

Born Friedrich Karl Georg Rumpf (1888-1949), Fritz Rumpf the Younger was the son of the noted painter Fritz Rumpf the Elder.  He grew up in Potsdam where, at the age of 15, he learned Japanese from a Japanese officer who was attending lectures at a local training school.  Rumpf subsequently studied at the Royal Academy of Arts in Berlin with Philipp Franck.  In 1907-1908, he did a year of military service in the German colony of Tsingtao [Qingdao], China.  After he was discharged in October 1908, Rumpf moved on to Japan, where he stayed until December 1909.

While in Japan, Rumpf studied Japanese woodblock carving under Igami Bonkotsu, who had also taught Helen Hyde the year before.  Bonkotsu would later carve the blocks for Ishii Hakutei's famous "Twelve Views of Tokyo" series starting the following year and provide invaluable training to Hiratsuka Un'ichi.  Bonkotsu was also friends with the painters and writers Ishii Hakutei, Yamamoto Kanae, Morita Tsunetomo, Kurata Hakuyo, and Oda Kazuma, who jointly founded in 1907 the art magazine Hosun patterned after European magazines such as Jugend.  Rumpf would subsequently publish three lithographs in Hosun, including this self-portrait. 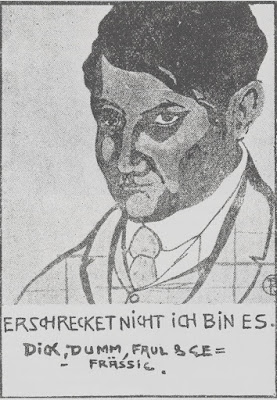 The Japanese writer and dermatologist Mokutaro Kinoshita (Masao Ota), who had years earlier had moved to Tokyo at age 13 to study German, met Rumpf during one of his visits to Bonkotsu's studio in 1908, and the two quickly became close friends.  In February 1908, Kinoshita took Rumpf to his first meeting of Pan no kai, a new literary circle that sought to replicate the bohemian atmosphere of Parisian cafes.  Hakutei and Kanae were also members of Pan no kai, whose numbers included Kafu Nagai, Kotaro Takamura, Jun'ichiro Tanizaki, and other notable figures in the Japanese literary and art world.  Rumpf became a welcome cosmopolitan addition to this group. 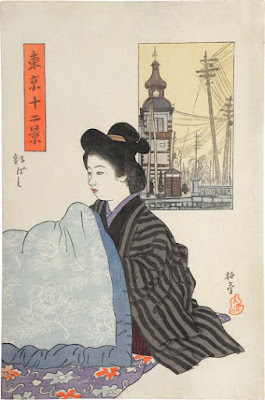 I have been able to find only woodblock print carved and printed by Rumpf during his apprenticeship with Bonkotsu.  It does not appear to have been commercially distributed and, in all probability, would have been printed in a typical small edition that one associates with prints made by members of the nascent creative print (sosaku hanga) movement.  Indeed, while it certainly lacks the technical finesse that Bonkotsu displayed with Hakutei's bijin, it is reminiscent of the early work of Ota Saburo and certain other sosaku hanga artists of the day.  Although the figures are frozen in a moment in time, motion is nonetheless suggested by flow of both the woman's and the man's robes, the angles of their heads, and by the departing background figure walking away from the dominant pair. 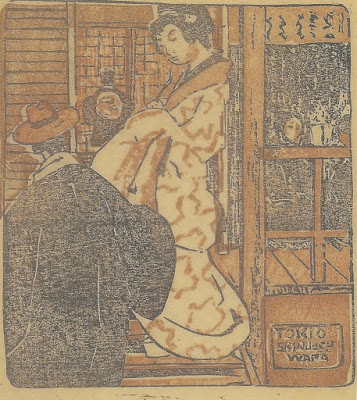 By 1910, Rumpf had returned to Berlin, where he continued his art studies under Emil Orlik.  Rumpf longed to return to the Far East, however, and, after a brief stint of study in Paris, Rumpf traveled to China in 1913 for reserve exercises and then continued on to Nagasaki, Nara, Kyoto, and Kobe.  By April 1914 he was in Tokyo. 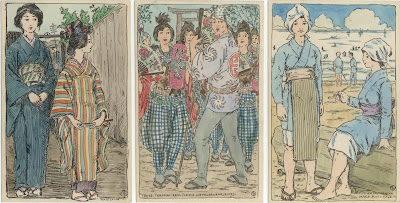 One of Kinoshita's main topics of interest was the history of Japanese Christianity in the 16th century.  In 1909, Kinoshita published On The Front of Christian Church (Nanban ji monzen), which was reissued in 1914.   For the 1914 printing, Rumpf designed the woodblock print of the "Sanota Maria" ship used to decorate the book's cover.  Kinoshita himself designed the black and white woodblock print on the slipcase, and Hakutei also contributed a color woodblock print inside the book itself.  The credits in the book are slightly ambiguous, but it appears that Igami Bonkotsu carved (and presumably printed) Rumpf's print and certainly carved Kinoshita's print. 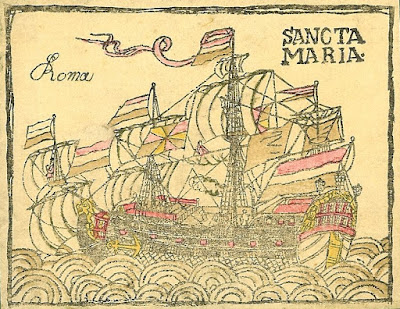 In July 1914, Rumpf receives an emergency call to return to service in Tsingtao, due to the outbreak of WWI.  By August, Japan and Germany were at war, and in early November, the Tsingtao stronghold fell to the Japanese.  Rumpf is taken prisoner and ends up being housed in the Oita and later Narashino prisoner of war camps in Japan until May 1919.  To alleviate the boredom of the camp, Rumpf translates Japanese folk stories, creates illustrated postcards, and stages puppet shows and plays.  With Charles Derlien, in 1919 Rumpf publishes in Japan "Das Oita-Gelb-Buch" with rhymes and hand-colored illustrations about life in the Oita camp. 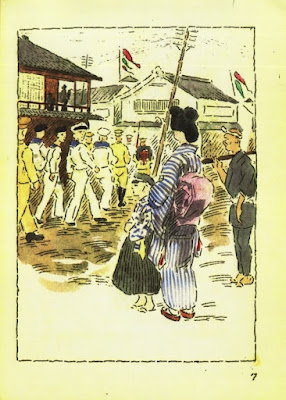 Rumpf remained in Japan for an additional eight months after being released from the Narashino camp.  Back in Potsdam, he married Alice Heller, a friend from his art school days, in 1920, with whom he would have two children.  Starting in 1926, Rumpf was employed at the Berliner Japaninstitut, for which he would make several trips to Japan over the years.  In 1931, Rumpf received his Doctorate based on his dissertation on the Ise Monogatari of 1608 and its influence on 17th century Japanese book illustration.  Rumpf's other notable writings in the post-WWI years include numerous books and articles on ukiyo-e, Japanese theatre, and Japanese fairy tales, folktales, and folk songs.  In the final analysis, Rumpf was far more interested in researching and collecting Japanese prints than he was in making his own prints.  As a result, his own tentative foray into the field of woodblock printmaking is all but forgotten today, overshadowed by his own studies about Japanese art and culture. 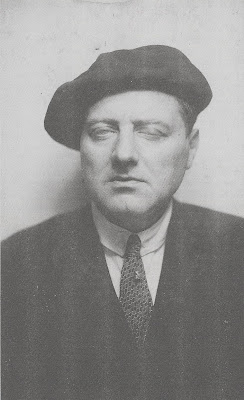 I would like to thank Setsuko Kuwabara and Peter Pantzer for supplying materials that helped make this post possible.

If a comment box does not appear below, click on this link:  http://easternimp.blogspot.com/2016/04/fritz-rumpfs-japanese-woodcuts-holy.html
Posted by Darrel C. Karl at Wednesday, April 20, 2016