Originally, I had intended to end last month's post on Elizabeth Keith with a throwaway paragraph about some undated Keith postcards I recently had found.  The only problem was, the more I researched those postcards, the more convinced I was that they were not actually by Keith. 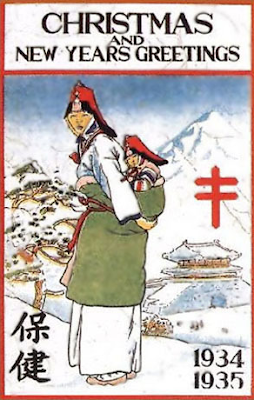 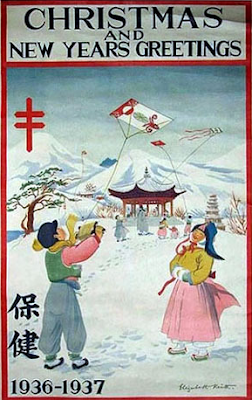 That's not to say that Keith's designs were never used on postcards.  The most famous examples are probably her designs of Korean Children that also appeared on Christmas Seals in the mid-1930s.  And I found this rare military-themed postcard on an online auction site (alas, already sold to someone else).  It was dated to WWI, although I wonder if it might actually be of 1920s vintage. 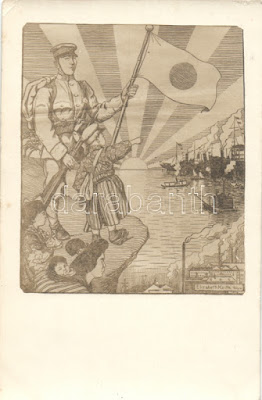 Recently, however, I acquired a set of four postcards that were attributed to Elizabeth Keith, all featuring Keith-esque Chinese children.  None, however, bear her name or initials, so I couldn't entirely rule out that they were the handiwork of some other individual.  They were, however, clearly published by the same entity, though no publisher name was given.  Each bears a series title "Street view, Custom in China," and the kanji 俗風國中, which translates to "Chinese customs" in Chinese when read from right to left.  The seller of these postcards was located in Milan, Italy, and the back of the postcards has Chinese characters that include the word for "postcard" as well as the French equivalent, which suggested that they were of Chinese or Japanese origin but intended for Westerners. 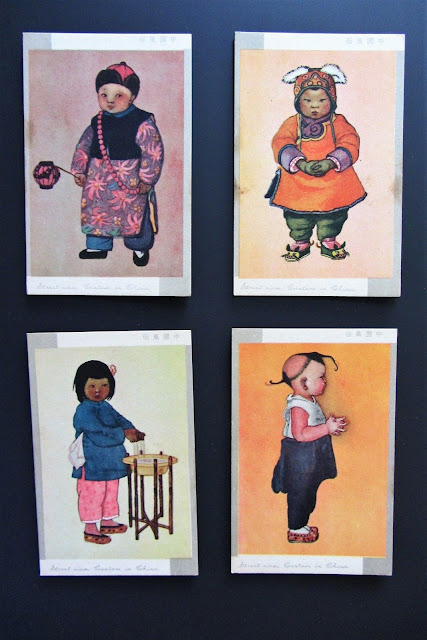 Shortly thereafter, I acquired a fifth postcard of a Chinese child, also attributed by the seller to Keith.  This postcard, however, lacked the series title that the other postcards had, and bore a stylized monogram in the lower right corner that I had never seen before associated with Elizabeth Keith.  The back of the postcard ascribed copyright to "K. & W.'s Kelly's Chinese Kiddies Series" and indicated that it was published by "Kelly & Walsh, Ltd., Shanghai, China." 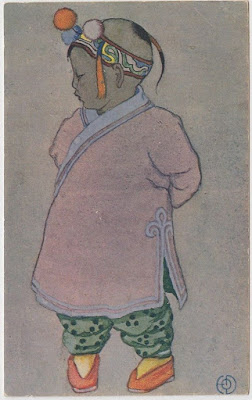 Further research revealed that Kelly and Walsh Ltd. was a Shanghai-based bookseller founded in 1882.  It continue to operate up to the outbreak of WWII, and also had offices in Hong Kong, Singapore, Tokyo, and Yokohama.  After the war, it resumed its operations in Hong Kong and Singapore, and it continues to operate in Hong Kong today.  Since only the Shanghai branch was mentioned of these cards, one can assume that the original postcards were issued in  the 1920s and/or the 1930s.  The earliest such postcard from this series that I could locate on-line with a postmark was 1935.

Interestingly, the following set of six postcards include the four designs from the "Street view, Custom in China" series above, albeit in a slightly different color scheme.  All also bear the ED monogram as well. 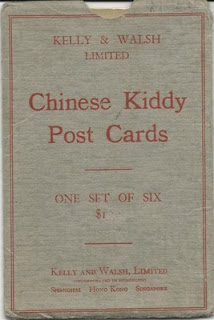 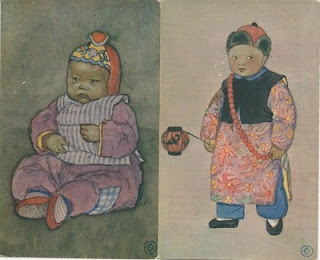 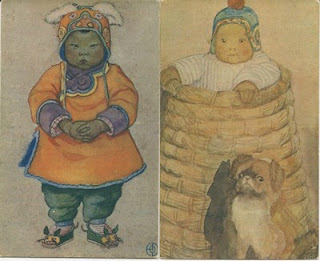 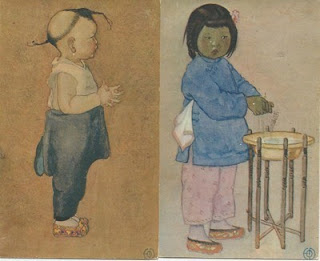 A second set of six postcards was also issued as part of K. & W.'s Kelly's Kiddie Series, which would have been the source of the my postcard of the child in the pink top and green pants. 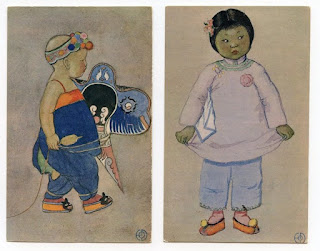 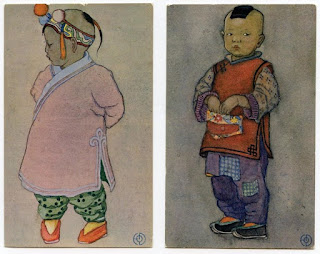 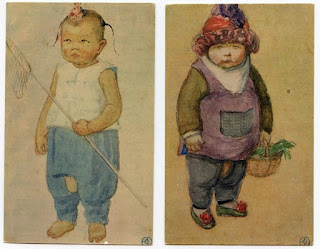 But are these postcards actually by Elizabeth Keith?  We know that Keith had a business relationship with Kelly and Walsh Ltd. because it issued a set of Keith postcards reproducing six of her woodblock print designs that had been originally published by Watanabe Shôzaburô in Tokyo.  The latest woodblock print designs in this set were originally published in 1925, so the postcards had to have been issued sometime in 1925 or thereafter.  But while some of the above twelve children designs are reminiscent of Keith's artistic style, others do not look like her handiwork.  Moreover, since it is now clear that all of the K. & W.'s Kelly's Kiddie Series designs bear the stylized "ED" monogram, I think we can safely conclude that none of them are based on Keith's paintings. 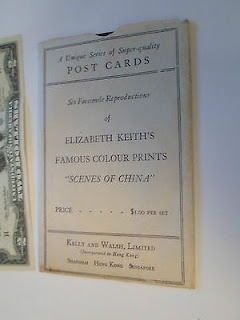 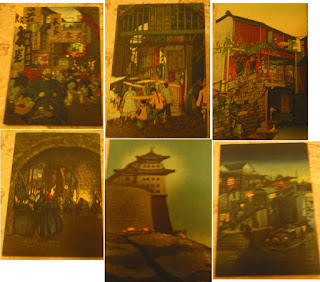 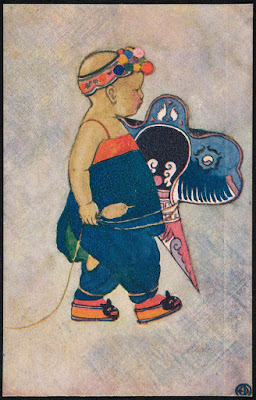 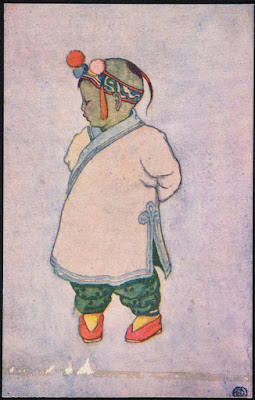 And the next three postcards seem to lack the monogram altogether, although Kelly and Walsh Ltd. are still credited on the back. 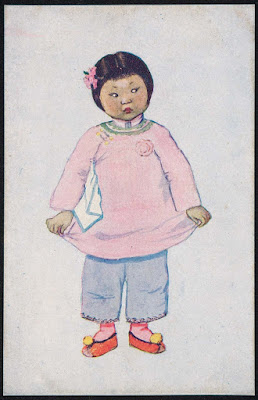 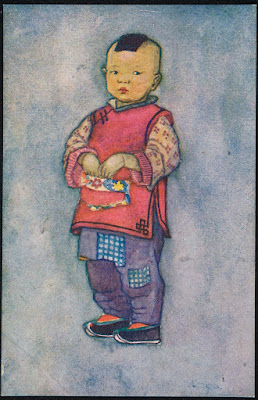 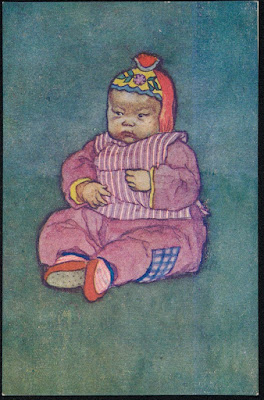 On the Manchukostamps.com website, Richard Arent asserts that the "Street view, Custom in China" postcards were the result of the Japanese Army during WWII plagiarizing the Kelly and Walsh printed postcards based on Keith's original artwork.  However, he also says that Keith's signature can be found on the corresponding postcards published by Kelly and Walsh postcards, which is incorrect. While I can accept the plagiarism theory explaining the absence of the "ED" monogram, I'm skeptical that the Japanese Army was actually responsible for the plagiarism, even though it may well have been the main beneficiary of it.  In any evident, it provides no demonstrable support for concluding that the artwork is Keith's handiwork. 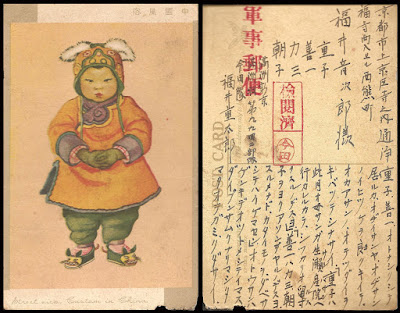 To further confuse the issue, a set of eight "Customs in China" postcards turned up on the Castle Fine Arts website about two months after I first posted this article that contained four later printings of the Elizabeth Keith woodblock print designs combined with the four later printings of children from the Kiddie Series that I had bought from the seller in Milan with the original presentation folder.   The publisher was stated to be "Daia Cons."  While it would be natural to assume that all of the postcards in the set are by Elizabeth Keith, there is nothing actually on the folder to attribute all of the postcards to Keith, even though some clearly were her handiwork. 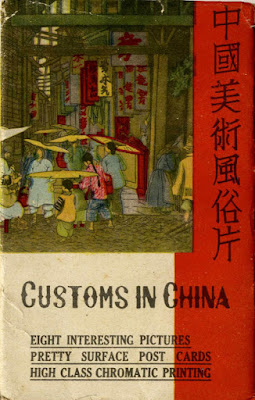 So who did create the artwork used in Kelly and Walsh Ltd. Kiddie Series postcards?  I welcome suggestions from my readers.  My best guess (and it really is only a guess) is Ella Du Cane (1874-1943), the daughter of politician and political administrator Sir Charles Du Cane and the great granddaughter of the artist John Singleton Copley.   Born in Tasmania, Ella Du Cane was a British watercolorist who, with her sister Florence, traveled the world unchaperoned after their father died in 1889.  They visited China, Japan, Egypt, the Canary Islands, and Madeira.  However, while her initials at least match the initials of the monogram, I have yet to find any specific work by Du Cane baring either of the two stylized "ED" monograms. 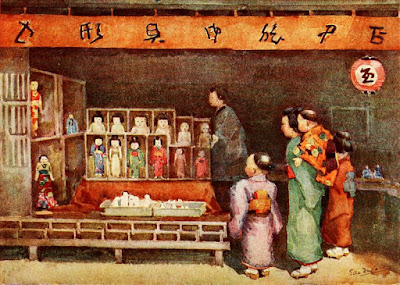 According to Wikipedia, Du Cane came into artistic prominence in 1893 when she exhibited at an exhibition of the prestigious New Society of Painters in Water Colours.  Queen Victoria took a personal interest in her work, acquiring 26 of her works between 1895 and 1898.  This early success allowed her to continue to travel, and in 1904 she had an exhibition of her pictures of Japan. 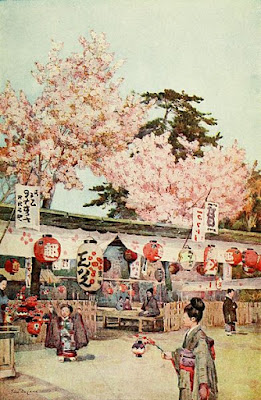 In 1907, the publisher A & C. Black used several of her Japanese pictures in Peeps of Many Lands: Japan by John Finnemore.  The following year, Black published a book on Japanese gardens called The Flowers and Gardens of Japan using Du Cane's pictures and with a text by her sister Florence.   She is said to have continued to travel and paint in her later years, although I have not been able to establish that she returned to the Far East after WWI. 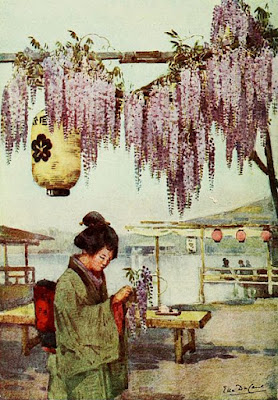 If a reader has any light to shed on the issues raised in this post, please share them in a comment below or privately contact me at the address at the right top of the page. If a comment box doesn't appear below, click on this link instead: http://easternimp.blogspot.com/2018/10/elizabeth-keith-game-of-dates-part-2.html
Posted by Darrel C. Karl at Thursday, October 25, 2018