Gordon, who runs the Modern Printmakers blog, recently introduced me to the work of Anna Mary Hotchkis (1885-1984).  Hotchkis was born in Crookston, Renfrewshire and studied art initially at the Glasgow School of Art.  After a year, she and her sisters Isobel and Margaret, became part of a circle of female art students studying in Munich with Hans Lasker.  When her family moved to Edinburgh, Hotchkis transferred to the Edinburgh College of Art for the remainder of her training under Robert Burns. 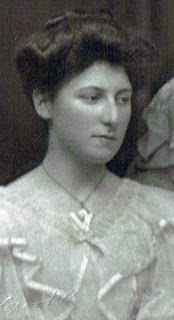 Hotchkis’ first links with Kirkcudbright go back to 1915, when she stayed in a studio rented from Jessie M. King in Greengate Close, which many years later would become her home.   At that time, Kirkcudbright was an artist colony whose inhabitants included E.A. Hornel, Charles Oppenheimer, E.A. Taylor, and King.  Hotchkis visited Kirkcudbright frequently over the next seven years, but left to go to the Far East in 1922 to visit her sister Catherine who was a missionary in Mukden (now Shenyang) in Manchuria.  She had an exhibition of  her paintings in Shanghai, and spent a year teaching art at Yenching University in Peking before returning to Scotland in 1924.  She returned to China, however, in 1926 and stayed until the Japanese invasion in 1937.  She must have known the etcher Thomas Handforth, because she took his photograph at some point during the early to mid-1930s when Handforth was in China. 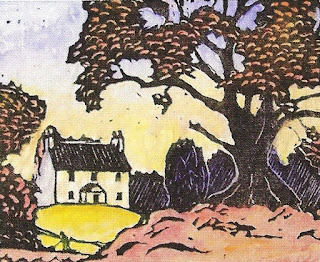 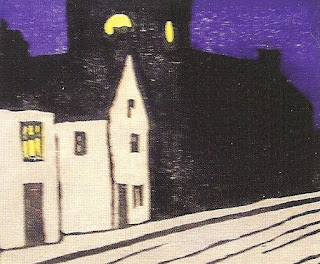 The Tolbooth at Night
(linocut) 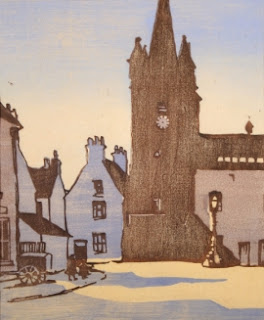 Hotchkis first met the American painter Mary Mullikin at Beidaihe, a Chinese seaside resort, in July 1924, and the two became close friends.  After she returned to China, the pair traveled together to Japan and Korea in 1927.  In September 1931, she and Mullikin made their first trip to the Yungang caves near the city of Datong in northern Shanxi province.  They returned there the following June, having conceived the idea of writing a book about the cave sculptures of Yungang illustrated with their own paintings and drawings.  It was published in 1935 as “Buddhist Sculptures at the Yun Kang Caves.” 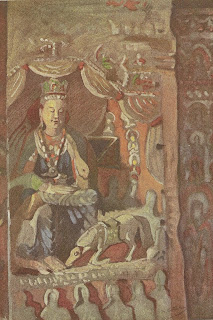 At the request of their publisher, the pair made a pilgrimage to the Nine Sacred Mountains of China in 1935 and 1936.  This resulted in another book illustrated by Hotchkis, although it was not published until thirty-seven years later.  China was under considerable turmoil  at the time, with revolutionary forces and brigands vying for control in some areas, so it was quite brave of them to travel to such remote parts under the circumstances.  Mullikin also wrote an article for the March 1938 issue of The National Geographic Magazine about “China’s Great Wall of Sculpture “ (Wu Tai Shan), which included reproductions of paintings and drawings by Mullikin and Hotchkis. 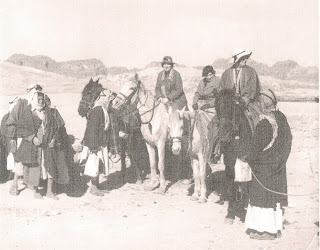 Upon hearing that the Japanese had entered Peking in 1937, Hotchkis decided to return to Scotland.  After spending six or seven months in India, she finally set up home in Kirkcudbright in 1938, where she would live and work for the rest of her life, although she continued to travel extensively in Europe and  North America and made two return trips to Hong Kong, at least one of which was in connection with the publication of her book “The Nine Sacred Mountains of China”  in 1973. 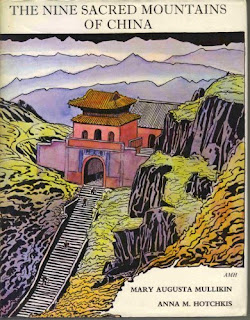 Unfortunately, not much is known about Hotchkis’ woodblock and linocut career.  As shown above, she made at least three, relatively simplistic prints of scenes of Kirkcudbright that were probably done in the 1915-1922 time period.  In early 1926, she exhibited in Glasgow three woodblock prints of Chinese scenes: “The Street, Shanghai”; “The Needle Pagoda, China”; and “The Great Wall Of China.”  I haven’t been able to locate images of any of these prints.  However, she made at least two other Chinese woodblock prints: “Boats, Hong Kong,” and “Boats, Macao.”  Stylistically, her “Boats, Hong Kong” print is quite similar to elements of her oil painting “The Peak, Hong Kong by Night.” I’ve also found a lithograph she designed of the “Wei Dynasty Pagoda, Sung Shan.” 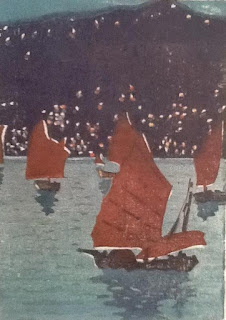 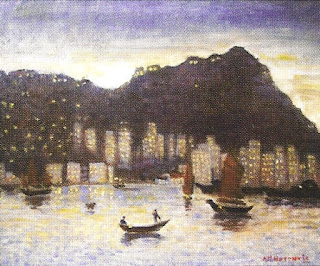 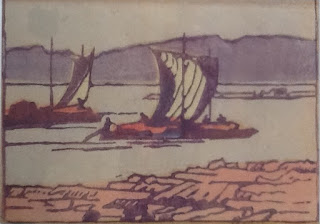 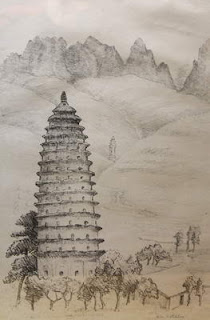 Wei Dynasty Pagoda, Sung Shan
(lithograph)
The examples of Hotchkis' Chinese wooodblock prints are very different.  "Boats, Honk Kong" clearly did not employ a outline keyblock.  It is printed (with considerable rubbing) on soft, absorbent paper with what appears to be watercolor-based pigments.  "Boats, Maco," on the other hand, looks like it might have used a partial keyblock and it is printed on very thin tissue paper.  It's a matter of taste, but I prefer the former to the latter.

Having spent more than a dozen years in China, Hotchkis’ output includes a large number of oil paintings, pastels, watercolors, and drawings of her time in China.  Many of the ones I have seen would have translated well to the woodblock print medium.  If anyone has any additional information about Hotchkis’ other Chinese woodblock prints, please let me know. 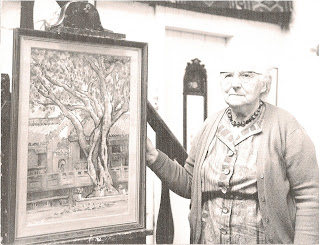 My thanks to the High St. Gallery in Kirkcudbright for certain biographical information and for some of the photographs and artwork images used in this entry.