Brittany has long been a fertile (if transitory) source of inspiration for a number of woodblock printmakers such as Henri Rivière, Carl Moser, and Yamamoto Kanae.  Although born in Lyon, the painter-printmaker Georges Nicolas Fourrier (1898-1966) would eventually settle in Quimper and devote a substantial portion of his artistic life depicting with ethnological interest the natives and landscapes of Brittany.  He is said to have become interested in the arts of Japan when, at the age of 16, a pulmonary condition left him confined to bed for three years.  He was impressed with the Japanese novels of Pierre Loti, and subsequently made his own encre and watercolor drawings for unpublished bookbinding designs for some of those novels. 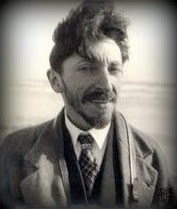 In 1919, he frequented the atelier of Alfred Keller, was exposed to the Musée Galliera, and made his first trip to Brittany.  Between 1920 and 1921, he studied woodblock printing with Alphonse-Prosper Isaac (who had studied under Urushibara Mokuchu) and took the art name of "Geo-Fourrier" (aka "Géo-Fourrier").  From 1921 to 1923, Geo-Fourrier studied at the École Nationale Supérieure des Arts Décoratifs in Paris, where he became acquainted with French artists and writers such as Mathurin Méheut, Charles Fouqueray, and Pierre Loti.

Geo-Fourrier depicted some Asian subject his early works, such as the watercolor La Prêtresse d'Issé that he submitted to the Salon des Artistes Français in 1919.  He used as his personal emblem the drawing of a cicada with Mount Fuji that bore his monogram in stylized letters mimicking Japanese kanji. Two years later, he executed a woodblock print that employed a similar cicada motif. 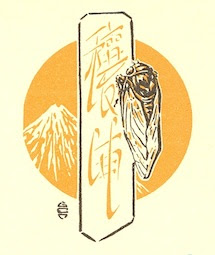 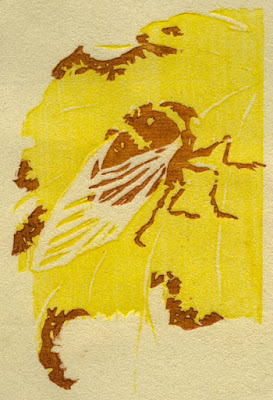 In 1923, Geo-Fourrier received an honorable mention from the Salon des Artistes Français for his woodblock print Le Barque de Pêche sur le Bosphore, after a painting by Auguste Matisse.  The following year he became a member of the Salon, exhibited a second  woodblock print based on a Matisse painting, and moved to Quimper in Brittany, where he worked as a house artist at the Henriot faiance pottery factory until 1950. 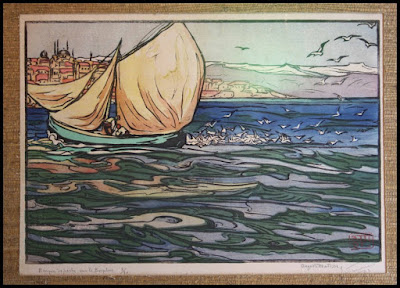 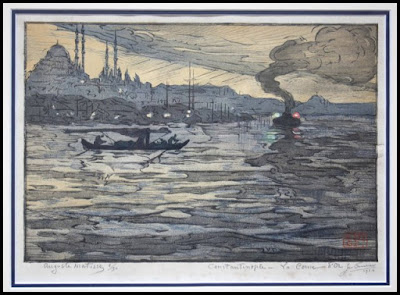 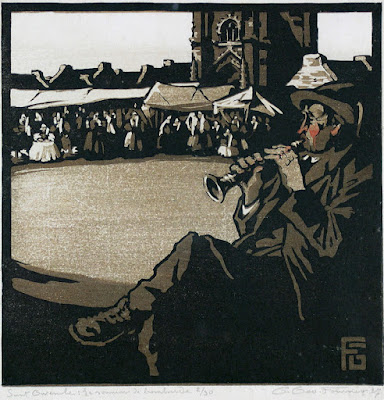 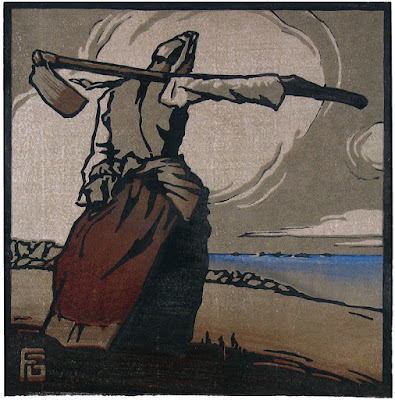 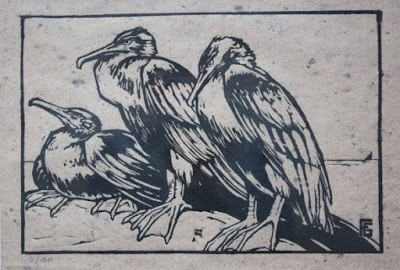 In 1927, Geo-Fourrier created gouache illustrations for the book Le Crucifié de Kéraliès by Charles Le Goffic.  The two-tone woodcuts in the book, however, were carved not by Geo-Fourrier but by J. Malcouronne.  In 1928, he also generated gouache illustrations for the book Les Hommes Nouveaux by Claude Farrère.  The four-color woodcuts in that book were carved by Auguste Mathieu.  A subsequent prize in 1930 allowed Geo-Fourrier to spend six months in French Equitorial Africa.  I detect a strong influence of William Nicholson in many of Geo-Fourrier's prints made during the 1920s. 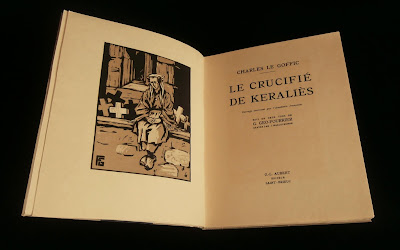 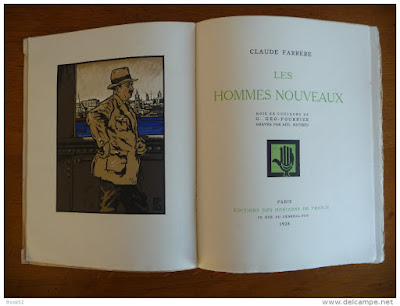 During the 1930s, Geo-Fourrier supplemented his income by producing hand-colored engravings, pochoirs, and postcard prints depicting scenes from various regions such as Brittany, Normandy, Pyrenees, Provence, Alsace, Limousin, and Auvergne.  In particularly, he was fascinated with the costumes and headdresses of the women of Bigouden.  His postcard work won him a gold medal at the Exposition Internationale des Arts et Techniques dans la Vie Moderne in Paris in 1937. 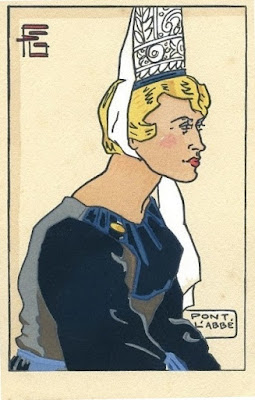 In 1935, Geo-Fourrier won a silver medal at the Salon des Artistes Français for his woodblock print Douarnenez, la Côte Noire, based on one of his gouaches.  In 1939, Geo-Fourrier participated for the last time at the Salon.  In 1941, he provided the artwork for the book Visages de la Bretagne, showing the evolution of the  Bigouden headdress.  In 1950, he created his own imprint "Éditions d'Art Georges Geo-Fourrier" to commercially promote his artwork in the form of postcards, figurines, playing cards, and the like. 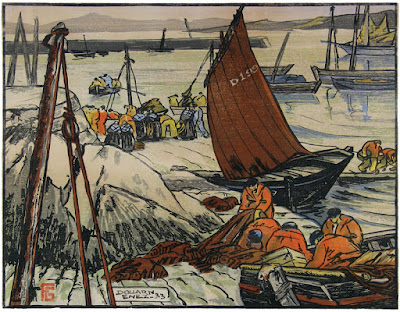 While one can detect the influence of Japanese prints in some of the above works, perhaps the best example of Geo-Fourrier's synthesis of Japanese art principles can be seen in his depictions of a Breton woman burning seaweed.  In his early gouache, the smoke from the burning seaweed forms a dramatic diagonal that spans nearly the full width of the piece.  The subject is placed asymmetrically to the right, presumably looking to the center of the fire that is just beyond view.  Geo-Fourrier also makes effective use of negative space.  In his later pochoir, the diagonal is muted, but the narrow vertical format creates an even greater, Hiroshige-like exaggerated perspective, as if the viewer is sitting on the ground looking up at the woman from behind. 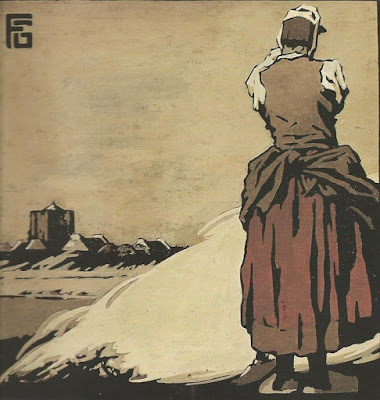 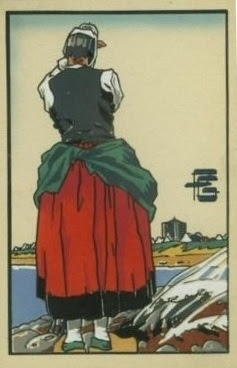 The fact that Geo-Fourrier was influenced by Japanese art, however, was not why I chose to write about him in this particular post.  After all, virtually every 20th century printmaker was informed by Japanese art to some degree, even if it does not show up overtly in their work.  What makes Geo-Fourrier interesting to me is that, despite the fact that he never traveled to the Far East nor (with one exception known to me) ever depict Asian subject matter in his work, he nonetheless commissioned the publisher Takamizawa Mokubansha in Tokyo to cut and print at least three of his designs in the late 1930s.  His first Takamizawa print appears to be Le Brûleur de Goémons à Notre-Dame de la Joie in 1936, based on a gouache he had made the previous year.
. 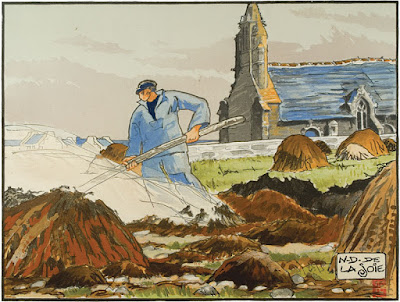 Geo-Fourrier's most successful collaboration with Takamizawa was Costumes de Fête, the blocks for which were created in 1937, although the printing was done in 1938.  The print was based on one of his large pochoir designs, which in turn was loosely based on a gouache Geo-Fourrier had made a decade earlier.  A second, derivative gouache was made in 1950.  The whereabouts of the original watercolor that Geo-Fourrier would have sent to Takamizawa is at present unknown. 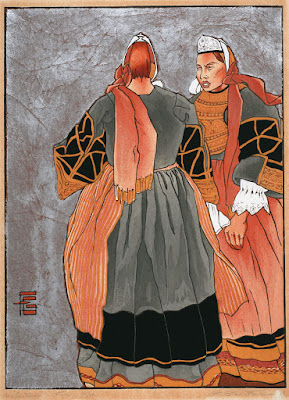 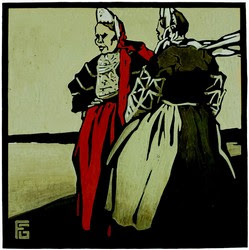 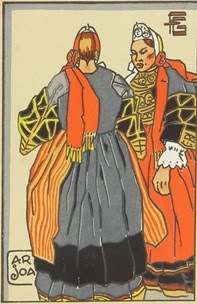 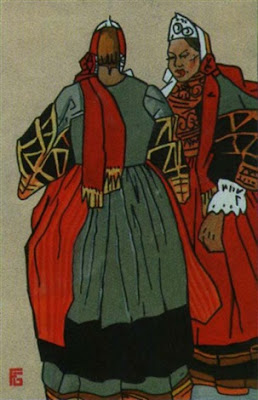 Why, one might ask, did Geo-Fourrier have prints made in Japan?  Unlike, say, Paul Jacoulet, Geo-Fourrier was certainly capable of making his own color woodblock prints.  It is possible that he merely wanted a large edition printed without having to do the time-consuming work himself.  Or, as Philippe Le Stum has suggested, Geo-Fourrier had respect for the traditional Japanese division of labor and wanted to produce authentic ukiyo-e, albeit prints that featured Breton subject matter.  But there is another, technical explanation for his decision.  Takamizawa's Costumes de Fête print exhibits a luxurious dark silver mica background made by a printing technique known as "kira-zuri."  Ground flakes of mica are mixed with either egg-white or rice-paste and then scattered on the print while the ink is wet or, more likely here given the size of the background, brushed on the print with a soft brush using a stencil.  Although the procedure is easy to explain, it is actually quite difficult in practice to obtain a smooth, even mica background without clumping such that the mica will not fall off over time.  The procedure was so difficult, in fact, that it was effectively a lost art at the beginning of the 20th Century that had to be relearned by shin hanga printmakers through trial and error.

I don't believe that there was any Western printmaker in 1939 who had the technical capability to make woodblock prints with solid mica backgrounds, and the only Western printmaker that I know today can is Paul Binnie.  While Urushibara Mokuchu never made a print with a solid mica background, Hilary Chapman informs me that he did embellish the vases of three of his prints with mica, so it is possible that Urushibara could have made this print for Geo-Fourrier if he had been asked.  Jules Chadel also made a few prints embellished with mica, something he likely learned from Urushibara. 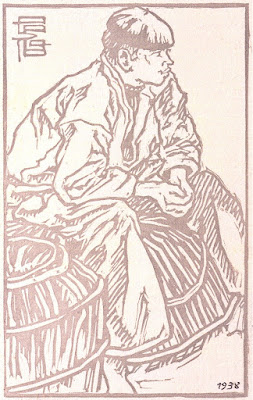 Around the same time, Takamizawa produced a monochromatic woodblock print for Geo-Fourrier in 1937 (although the copy shown above is hand-dated 1938).  This design is only known to exist printed in brown or black ink.  One suspects that it was originally intended to be a polychrome print, but for some reason the color blocks were never carved. 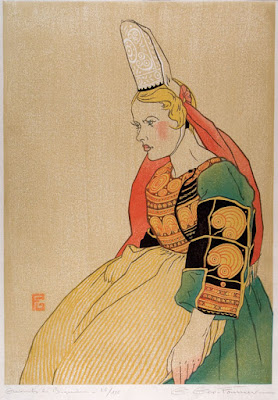 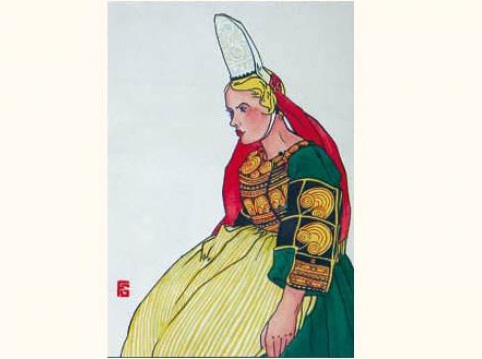 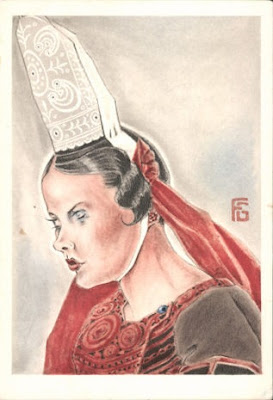 
Geo-Fourrier's final print with Takamizawa appears to have been another Bigouden portrait called Gwenola la Bigouden that featured a lighter gold mica background.  Despite the size of their editions, the prints that Geo-Fourrier made with Takamizawa are rarely encountered in the marketplace.   I have never seen any of these prints in person, and I not aware of any Japanese art dealer who has ever handled a copy.  Indeed, I doubt that any copies have ever been available for sale outside of France.  I would be happy to hear from any reader who might have a copy for sale.

I'll end this post with the only other Japanese subject I've been able to locate by Geo-Fourrier.  There's no indication as to the date of this print, but my surmise is that it was likely made when Geo-Fourrier was studying woodblock printing with Isaac in the early 1920s. 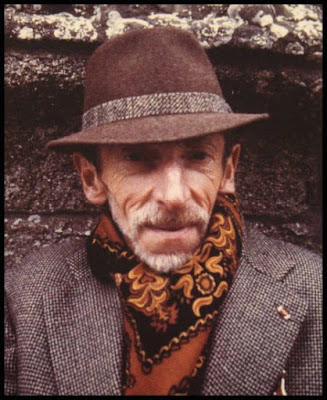 
9/25/16 Postscript: Thanks to Philippe Le Stum, the Director of the Musée Départemental Breton, Quimper, I've added to this post some additional information and images about Geo-Fourrier's life and work.

If a comment box doesn't appear below, click on this link instead:  http://easternimp.blogspot.com/2016/07/japan-comes-to-brittany-geo-fourriers.html
Posted by Darrel C. Karl at Monday, July 04, 2016