I've posted twice in the last eight months about the Japanese-American artist Kakunen Tsuruoka, once about his California woodblock prints and then about his "lost" Yosemite print.  As a consequence, anyone who enjoyed those posts will be interested in knowing that, in connection with the upcoming New York Asia Week (March 13-23, 2019), the prestigious Scholten Gallery in New York City is mounting an exhibition called "Captive Artist: Watercolors by Kakunen Tsuruoka (1892-1977)." 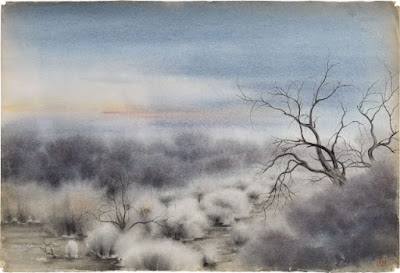 Untitled (mesquite with mist lingering on brush) (c. 1942-1944) by Kakunen Tsuruoka
Courtesy of the Scholten Gallery
(watercolor on paper) 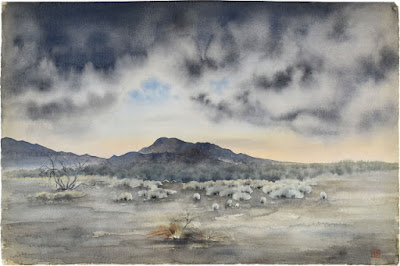 Curated by the Director of the Scholten Gallery, Katherine Martin, the exhibition features 25 landscape paintings created while Kakunen was confined to Poston Camp III, part of the Colorado River Relocation Center in Arizona.  This was one of ten camps to which Japanese-Americans were forcibly relocated during the Second World War.  Kakunen depicted the bleak and barren landscape around camp in a somewhat expressionist style, producing paintings that seemingly mirrored the alienation, isolation, and loneliness that Kakunen and no doubt other camp inhabitants were feeling at the time. 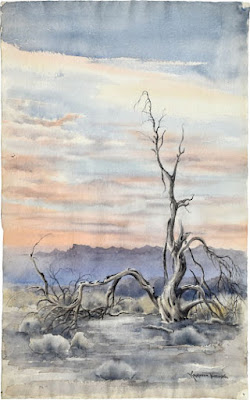 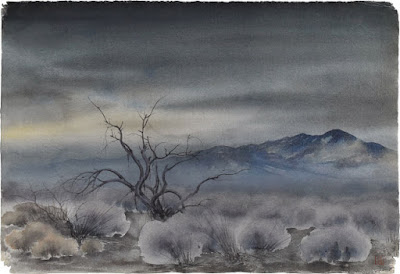 Untitled (dark sky over mist on mesquite and brush) (c. 1942-1944)
by Kakunen Tsuruoka
Courtesy of the Scholten Gallery
(watercolor on paper)

The exhibition also features 15 of Kakunen's early decorative bird-and-flower paintings and Japanesque landscapes.  These paintings, as well as the ones from the internment camp, are from the Estate of Haruno Tsuruoka (1924–2017), the artist's daughter-in-law, and are being offered by members of her family.  Rounding out the exhibition are a  selection of Kakunen's woodblock prints published by Watanabe Shozoburô in the 1930s.

Fortunately, those unable to visit the Scholten Gallery in person can view the entire exhibition on-line, with links to separate pages where detailed information about each painting or print can be found.  The Scholten website also includes a lengthy discussion of Kakunen's life and career which is well worth reading.
Posted by Darrel C. Karl at Thursday, February 28, 2019 Have a comment?:

Some of you may have seen or heard that Google had decided to shut down Google+ accounts. I didn't think that it would have any effect on this blog, other than Google+ account users couldn't use the +1 buttons, something I didn't care about and which few people bothered to use anyway. However, one thing I didn't realize was that comments to my blog were set up as Google+ comments when the blog was created, and not as Blogger comments.

Effective today, Google has deleted all Google+ comments from all blogs, including those for Eastern Impressions. Needless to say, I wish that this hadn't happened. Many of the comments on this blog were from seasoned dealers, art historians, and print collectors who had valuable information to share, and their past contributions will be sorely missed. New comments can still be left in the blogger comment boxes at the bottom of current and past blog entries, but unfortunately there is no way to retrieve the old comments. I hope that this will not discourage long time readers from taking the time to comment in the future, or for new readers to comment on older blog posts of interest.
Posted by Darrel C. Karl at Tuesday, February 05, 2019 Have a comment?: