The Asian Spring of Mrs. Gifford

Born and bred in Louisville, Kentucky, Marguerite Peters Gifford (1887-1969) spent the first half of her life as a college-educated, upper-middle class wife whose pastimes seem to consist of membership in the Daughters of the American Revolution and president of the Woman’s Club of Louisville.  Then, in 1935, Gifford’s Louisville routine was interrupted by the premature death of her husband.  Two years later, at age 50, this Louisville widow went on a two-month tour sponsored by the International School of Art, visiting artists in four European countries.  When the tour was over, Gifford decided to remain behind in Europe.  During her time abroad, she took lessons in watercolor painting in London, and was in Florence in 1938 and saw Benito Mussolini receive Adolf Hitler. 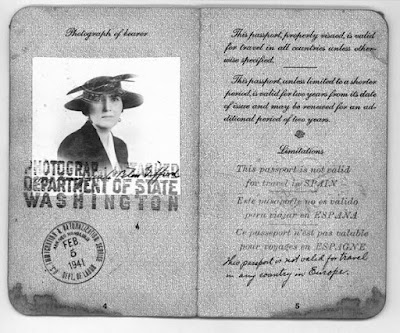 Passport of Marguerite Gifford
In 1939, with war looming in Europe, Gifford turned her sights to travel in Asia and Oceania. She visited such cities as Bombay, Bangkok, and Hong Kong on her way to Japan. 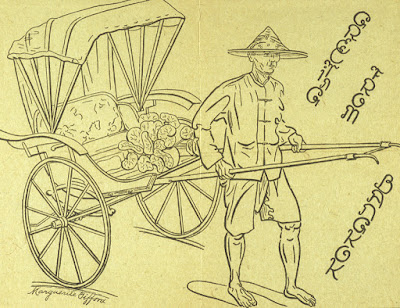 While in Japan, Gifford studied woodblock printing, apprenticing herself to two Japanese printmakers.  As far as I know, Gifford never mastered that medium, but she arranged for a certain number of her designs to be turned into woodblock prints by Japanese craftsman.  At present, I’ve located images of three such prints bearing the name “Marguerite Gifford.”  (If a reader is aware of images of any further designs, please let me know.) 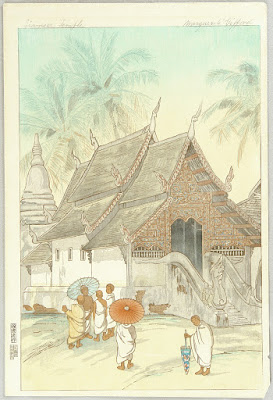 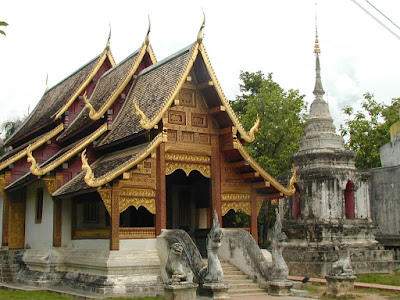 The first of the four prints bears the inscription “Siamese Temple,” evidently memorializing one of the sites she visited during her time in Thailand.  The structure is similar to the Wat Phra Singh viharn in the old center of Chiang Mai but, since there are over 200 temples in and around Chiang Mai, there are note doubt many other likely candidates. 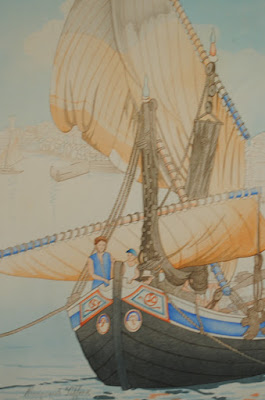 The second print, which I bought from Steven Thomas, is untitled.  Based on the type of sailboats, the city architecture (note in particular the tower structure in the upper left if you click on the image), and the figures, the locale would appear to be European.  My original guess was the harbor at Genoa, or perhaps Livorno, since we know Gifford visited nearby Florence.  But recent information suggests that it's Pirano, Slovenia, near Trieste, and that tower is the bell tower of the Church of Saint Clemente adjacent to the Punta Madonna lighthouse.  It's even possible that the initials “SC” stand for "San Clemente," but if there is such a sailing vessel in Pirano harbor today, I’ve not been able to discover it. 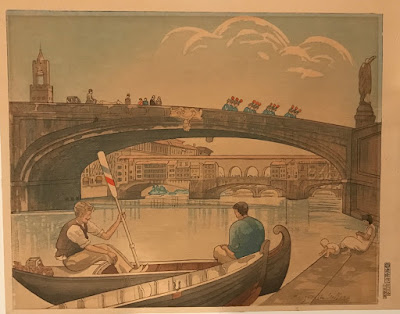 The third (badly faded) print is of a view from the Arno river in Florence.  A sticker on the back of the print's frame indicates that it was based on a painting made in 1938, which would be consistent with the time that Gifford was in Italy.  All three of the above prints were produced by the famous Tokyo woodblock print publisher Watanabe Shozaburô, who issued shin hanga prints by Kawase Hasui, Ito Shinsui, Charles W. Bartlett, and Elizabeth Keith, among others.  Watanabe’s copyright seal (“Watanabe Saku”) on these print has some similarities to those found on other prints that he published in the 1934-1945 time period, although I’ve not seen this exact seal on any of Watanabe’s other prints.

Gifford’s fourth print, “Doshisha Tokiwai Mon (Side Gate at Doshisha University, Kyoto),” however, appears to lack any seal to identify the publisher, the carver, or the print.  Gifford’s design, however, may itself provide a visual clue as to the identity of the publisher. 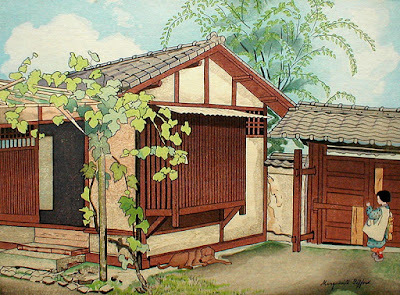 Doshisha Tokiwai Mon (c. 1939-1940)
Courtesy of the Annex Galleries
(woodblock print)
When I first saw an image of this print, I was immediately struck by the manner in which the little girl in the print was depicted.  There is a young Japanese girl in a similar pose in a 1928 print by Hiroshi Yoshida.  Yoshida also issued small, non-canonical postcard-size prints that featured that same little girl.  Did Gifford copy her little girl from one of those Yoshida prints?  Did she commission the print from the Yoshida studio in Tokyo?  Did she perhaps even apprentice with Hiroshi Yoshida or one of his craftsmen?  The answer might lie in Gifford’s papers now residing at the Bridwell Art Library at the University of Louisville, but must remain a mystery for the time being. 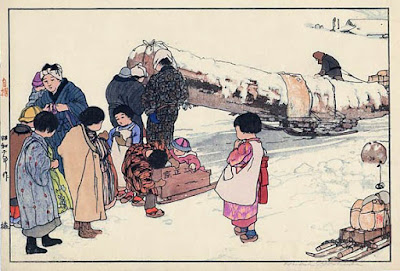 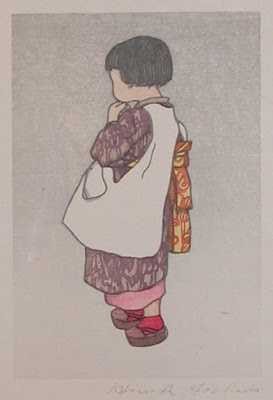 Gifford appears to have left Japan before the end of 1940, likely because of Japan joining the Tripartite Pact in September and the continuing Japanese military expansion into Indochina.  She moved on to New Zealand and New Caledonia, spending many months in the latter archipelago painting the indigenous Kanaka inhabitants, before returning home in the fall of 1941.  She had been abroad for over four years. 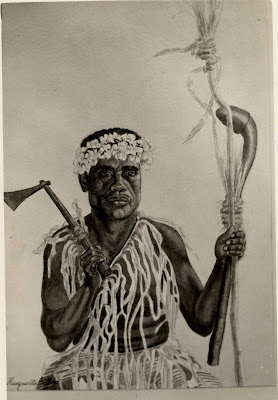 Upon her return to the U.S., Gifford lectured about her travels and continued to study art.  She became a well-known figure in the Kentucky art scene for the rest of her life, exhibiting her work both in and out of the state.  Hers was a truly an artistic career which blossomed late in life.  She worked in a number of different media but, as far as I know, turned her attention to American subjects and designed no further woodblock prints. 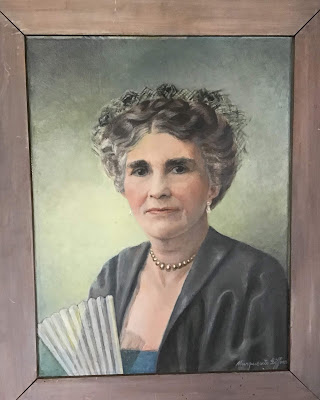 Addendum of August 23, 2015:  Dr. Kendall Brown, the premier shin hanga scholar, was kind enough to share with me copies of pages of Watanabe Shozaburô's notebook listing Gifford's prints that Watanabe's studio published.  They are:

In light of this information, I have revised the blog entry above accordingly.  Clearly there are more Gifford prints out there somewhere than I had imagined.  And since "Doshisha Tokiwai Mon" was not listed as one of Watanabe-published Gifford prints, that provides greater credence to the theory that it might have been published by Yoshida's studio.

If a comment box does not appear below, click on this link instead: http://easternimp.blogspot.com/2015/08/the-asian-spring-of-mrs-gifford.html
Posted by Darrel C. Karl at Saturday, August 15, 2015