I knew I'd get around to posting something about Lilian Miller (1895-1943) at some point, but I've held off doing so up until now simply for a lack of anything new to say about her.  The definitive monograph on Miller remains Between Two Worlds: The Life and Art of Lilian May Miller by Dr. Kendall H. Brown published nearly twenty years ago in connection with an exhibition that opened in 1998 at the Pacific Asia Museum.  Other than providing a few preliminary remarks about her life, I refer my readers to that publication for the details of her biography. 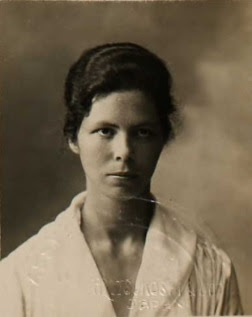 Although often lumped in the same breath as Helen Hyde, Bertha Lum, and Elizabeth Keith, Miller has always stood apart for me for various reasons.  Unlike Hyde, Lum, or Keith, Miller was born in Japan, spending her formative years in Tokyo until her father was transferred to Washington, D.C. in 1909 when she was 14.  While in Japan, Miller had five years of training in painting and drawing from Japanese artists such as Kano Tomonobu and Shimada Bokusen, and resumed her studies with Bokusen after college when she returned to Japan in 1919.  While Hyde, Lum, and Keith all studied the process of woodblock carving and printing (and Lum and Keith actually made a limited number of prints in which they were responsible in whole or in part for carving and/or printing their designs, usually out of necessity), the trio generally relied upon professional Japanese carvers and printers to make their prints.  Miller did too, at the outset of her career.  However, once she gained sufficient technical proficiency in both skills, she not only began to self-carve and self-print her work, but continued to do both for rest of her career.  These facts arguably make Miller's woodblock prints on the whole the most authentically "Japanese" of any produced by this famous quartet of female printmakers. 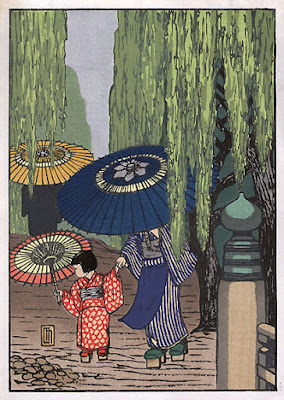 Paradoxically, I've always found Miller's prints generally to be the least interesting of the lot (and don't get me started on her poetry).  She lacks Keith's eye for architectural and anthropological detail, she is uninterested in stuff of myths and legends like Lum was, and the few prints that do feature mothers and/or their children are relatively bland and static when compared to Hyde's prints. Far too many of her designs look more like kitschy book or magazine illustrations of the day.  It's not just that she depicts a romanticized Orient, but that more often than not, it's a stereotypically romanticized view full of generic depictions of Fujis, sampans, umbrellas, toriis, and bonsais (though I will admit that the quality of her printing can not be fully appreciated from most photographic reproductions of her work. 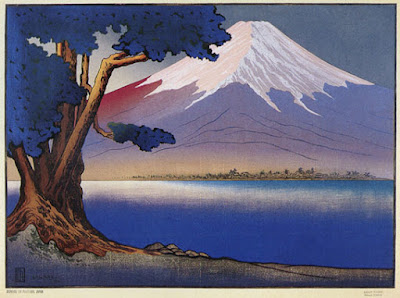 I've never had much interest in most artists' sexual identities.  If Lilian Miller preferred to be called "Jack" by her friends and family, wore trousers in private, kept her hair short, and had intense female friendships, that was her business.  It certainly didn't overtly manifest itself in her designs in the way that, say, Paul Jacoulet's sexual orientation sometimes did.  Indeed, if anything, it is somewhat ironic that so many of her prints are filled with phallic images of tree trunks, bamboo stalks, stone lanterns, and building columns.  To misquote Freud, though, maybe sometimes a tree trunk is just a tree trunk. 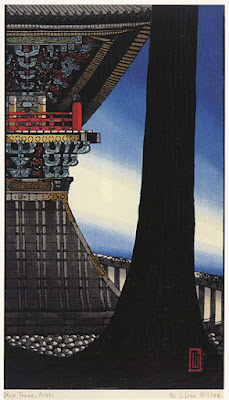 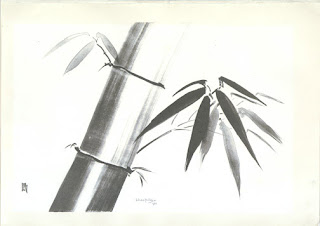 On the theory that even a blind pig can sometimes find an acorn in the woods, Miller was clearly capable on occasion of producing superior work.  In my view, her best design is "The Crescent Moon Rides [sic: Runs] Low," Korea.  It is an evocative, naturalistic landscape that eschews her usual stereotypical imagery and lacks any whiff of kitschy illustration.  What makes the design work so well is almost entirely due to Miller's ability to successfully employ various effects unique to woodblock printing into an aesthetically-pleasing and harmonious whole.  The most striking feature of this aiban size print, of course, are its mountains, repeatedly overprinted to created a deeply saturated shade of dark purplish-blue.  Then there's Miller's dramatic use of bokashi (gradation printing) in the sky to indicate what I assume is the beginning of the morning sunrise, with some subtler use of bokashi on the water.  The earth is printed in a speckled fashion that I believe is gomazuri (sesame seed pattern) or some other printing technique closely akin to gomazuri.  Finally, the whirls in bottom right corner are baren-suji, intentional circular marks created by the pressure applied from the printing tool ("baren") moving in a circular pattern on the back of the print during the printing process. 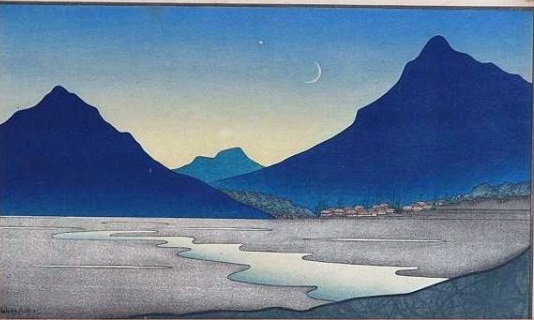 Recently, I was offered a Miller print by Frank Castle of Castle Fine Arts that is not found in the Brown catalog.  It is a cut down version of "The Crescent Moon Rides Low," Korea, less than half as wide and cropped by approximately one centimeter at both the top and bottom.  The bokashi work in sky is flatter and less elaborate (and missing altogether in the water), the green vegetation lacks detail, there is a small area which Miller appears to have forgotten to fill in, and the registration isn't perfect in places.  There are monograms in each bottom corner (her signature appears outside this portion of the image in the large print.)  But perhaps the most interesting feature of this print besides its size is the fact that Miller used crayon and pencil to depict certain attributes of the print, including its border. 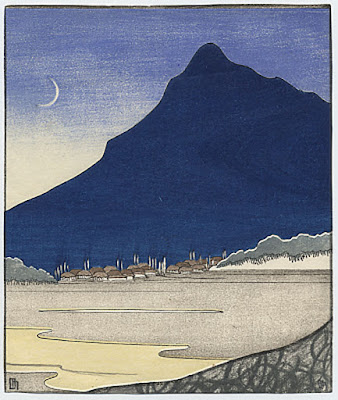 This cut-down state came from the estate of Mrs. Adele Buckner, wife of Lt. General Simon Boliver Buckner, Jr., the head of the Alaska Defense Command at the time of the outbreak of WWII and who was subsequently killed in the Battle of Okinawa.  Adele Buckner spent three weeks vagabonding across southwest Alaska with Miller in 1941, which Buckner recounted in an article for Alaska Life.  She was also one of Miller's friends who handled Miller's estate after her death from cancer in 1943.  My surmise is that this was a non-commercial gift print, likely one made several years after the original publication of the larger version and printed in extremely small quantities. 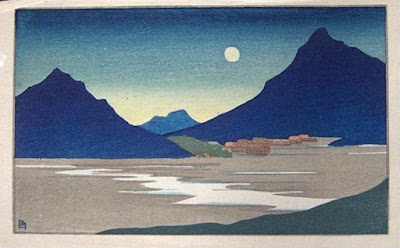 Miller also produced a related, postcard size version of "The Crescent Moon Rides Low," Korea.  The Brown catalog does not date this print but it is sufficiently stylistically different and more technically accomplished than Miller's early postcard size prints that I have to believe that it dates to at least 1928, and most likely to the early to mid-1930s when Miller was repurposing a number of her prior designs.  As it turns out, the cut-down state was not my first encounter with Adele Buckner.  Back in 2006, I acquired at an auction not only Miller's postcard size print and and the related aiban size version shown above from the Buckner estate, but also a minor color variant (likely a test proof) and Miller's original watercolor for the postcard printing size design. 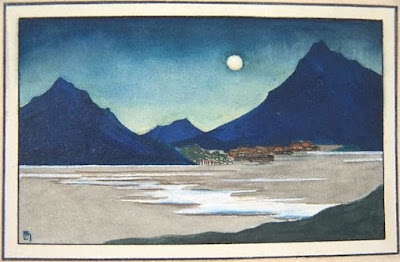 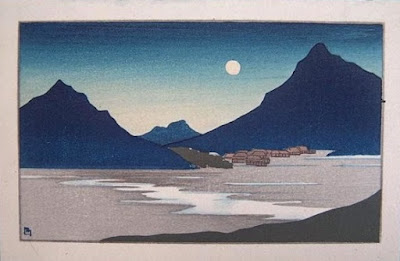 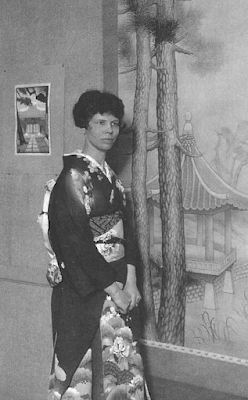 Lilian Miller in kimono at the Nicholson Gallery,  (April 1930) by Dickson & Thurber
Courtesy of Vassar College

As Ken Brown notes, Miller also produce a stylistic and thematic variant of "The Crescent Moon Rides Low," Korea print 6-7 years later, flipping the foreground hillock from right to left, expanding the river to fill the center of the picture, and replacing the sleepy village with a shrine gate. 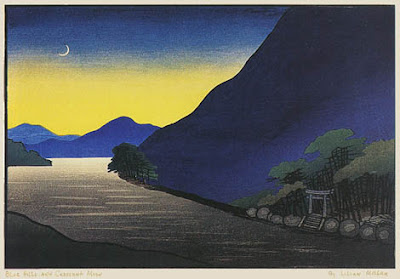 There is one other known print omitted from the Brown catalog that came to light after the Pacific Asia Museum exhibition was over.   (Remember, the catalog was published when the Internet was still in its infancy and on-line access to dealer stock and museum holdings was virtually nil.  In contrast, the standard catalogs on Hyde, Lum, and Keith fail to list or illustrate a substantial number of those artists' print designs.)  The missing print is called "Pagoda of the Evening Star," published in 1931. 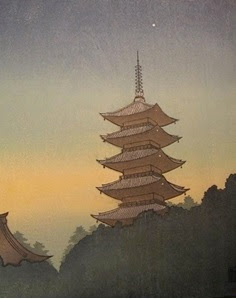 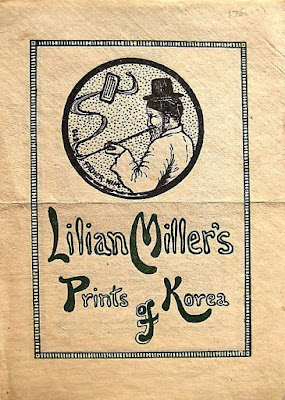 Cover of an advertising leaflet (c. 1920s)
printed in Yokohama by the Box of Curious Press
Personal Collection

I'll conclude this post with two examples of Miller's late watercolor style which, wouldn't you know it, both feature tree trunks: 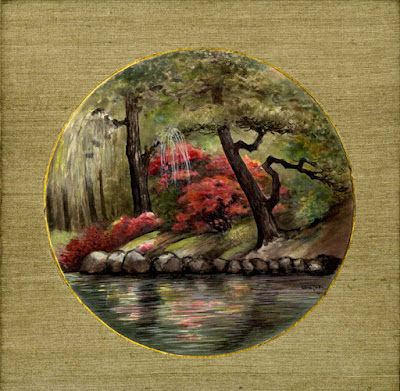 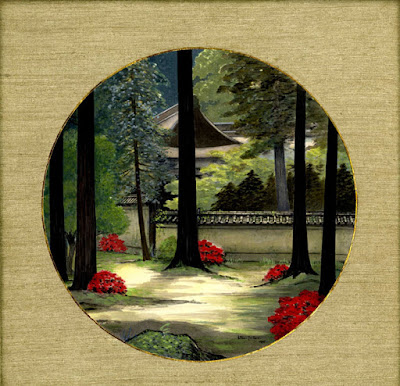