Friedrich Capelari (1884-1950) has the notable distinction of being the first Western artist to work with the Japanese woodblock print publisher Watanabe Shôzaburô,  He was born in the small town of Bleiburg in a southern Austrian district called Carinthia, known for its fine wood carving.  His father, in fact, was engaged in painting and woodcarving for use in interior design.  Capelari studied decorative arts and graphics at a trade school in Graz, and then attended the Academy of Fine Art in Vienna from 1906 to 1910, winning an academic prize. 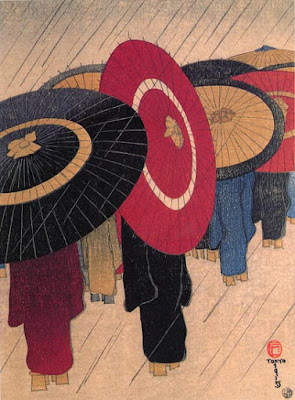 While at the Academy of Fine Art, Capelari met a Japanese student who was briefly in attendance there, which planted the seed in his mind to one day visit Japan.  In 1911, he received a commission from the Austrian steamship company, the "Osterreichischer Lloyd," to paint a picture of Shanghai harbor, thereby providing the funds for his passage to Japan.   Capelari would spend the next several years in China, Korea, and Japan.  Like many Europeans, however, he eventually found himself stranded in the Far East due to the outbreak of World War I. 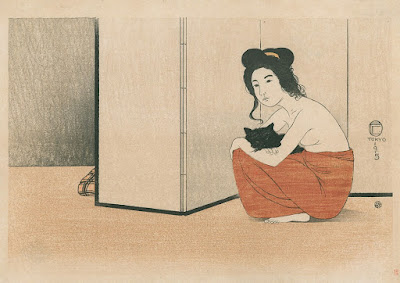 According to some sources, Capelari first met Watanabe in 1914 or else in the spring of 1915, when he rented a house in Akasaka, Tokyo.  Around this time, a Tokyo department store had an exhibition of Capelari's watercolor landscapes.  Watanabe attended the exhibition, and thought their composition and color contrast made them particularly suitable for conversion to the woodblock print medium.  Capelari's collaboration with Watanabe would led to some 15 woodblock prints being made between 1915 and 1920 (although all but one of which were made in the 1915-1916 time period when Watanabe's fledgling shin hanga print business was trying to get off the ground). 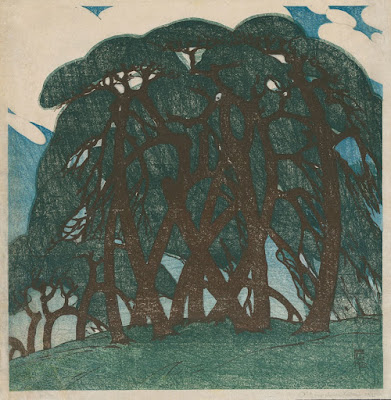 Capelari left Japan in 1920 and, after a long sojourn spent in the Dutch Indies, Java, and Bali, returned to Europe in 1922.  He then spent ten years in The Netherlands, Britain, and Spain.   Capelari revisited Java and Japan in 1932, before settling down in Carinthia.  He became a member of the Carinthia Art Society and spent his later years creating wood sculpture and landscape paintings in oil.  Curiously, despite his contact with Watanabe and the fact that wood carving was "in his blood" so to speak, Capelari never seems to have been motivated to attempt to carve any of his own prints. 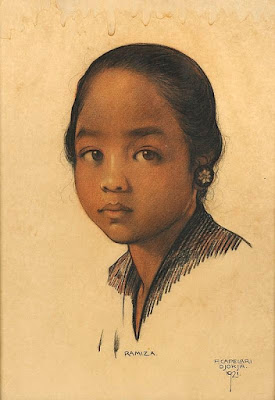 Capelari's woodblock prints, influenced by the likes of Hokusai and Harunobu, are well-documented and discussed in the literature, and I don't have anything particularly original to say about them at this time.   However, what has been overlooked before now is that Capelari also made etchings, at least one of which depicts a Japanese temple. 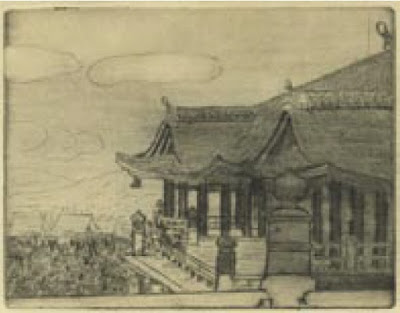 Aside from its appearance in a single gallery exhibition catalog, I have never seen any copies of this etching published or for sale anywhere.   And if Capelari made this etching, it is only logical to assume that he made at one or more other etchings detailing sites he visited while in the Far East, although the identities and whereabouts of such etchings are presently unknown.  Despite the title I've used for this post, I don't seriously believe that such Capelari etchings are truly "lost," only overlooked and neglected, and hopefully this post will lead to more copies coming out of the woodwork (to mix metaphors).  Readers who are aware of additional designs are encouraged to get in touch with me.

My thanks to Peter Pantzer, whose research is responsible for providing much of the biographical information about Capelari's life and career.

If a comment box doesn't appear below, click on this link instead: http://easternimp.blogspot.com/2016/10/the-lost-etchings-of-fritz-capelari.html
Posted by Darrel C. Karl at Saturday, October 29, 2016