From 1904 until his retirement in 1930, Emil Orlik was the head of the department for graphic art and book illustration at the Academy of the Museum of Applied Arts (Kunstgewerbemuseum) in Berlin. There he taught countless students over the years in the fundamentals of woodblock carving and printing, etching, and lithography, many of whom would became notable graphic artists in their own right.   However, unlike Orlik, few of his students ever travelled to the Far East and even fewer seem to have depicted Asian subject matter in their prints.   A notable exception, however, was the little-known German artist Fritz Steinert (1891-1981). 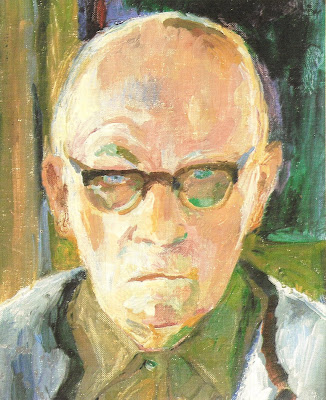 I have only two Steinert woodblock prints in my collection (one acquired in 2017) and I knew virtually nothing about this artist beyond a couple of landscape paintings that I had seen come up for auction when I started to draft this post in 2015.  However, thanks to the efforts of the Austrian scholar Peter Pantzer, I recently learned about a memoir that Steinert published shortly before his death under the title “Zwishen Kunst und Kommiß.”  In the course of tracking a copy of that memoir down, I also found a small, undated monograph by E. Benner entitled “Fritz Steinert Bilder Zeichnungen.”  (All the black and white woodblock prints featured in this entry are from these two sources.)

Per Peter Pantzer, Steinert, at age 16, was accepted to the art school attached to the Museum of Applied Arts in 1907.   There he met Emil Orlik, who became a major influence on his early work, became exposed to Japanese prints, and developed an affection for the Far East.  At age 20, like other German young men at that time, Steinert had to complete compulsory military service.  He elected to join the Marine Corps and, in 1911, opted for deployment in the German colony Tsingtao in China.  (Orlik made his second trip to China in 1912, but I have not found any evidence that the two met up with each other there.) 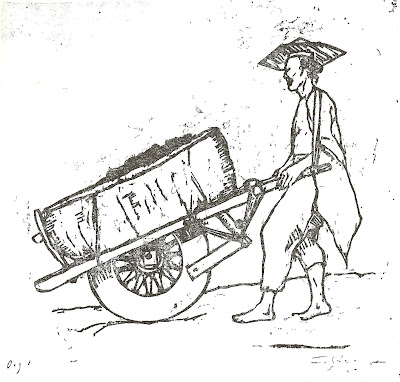 At least two woodblock prints by Steinert depicting Chinese scenes are known to exist, “Kuli in Tasingtau” and “Mandschoujunge.”  The former is rather crude and undistinguished, but the portrait of the Chinese boy is surprisingly powerful, all the more so perhaps because of its economy of line.  It is reminiscent of Orlik’s color woodblock print portraits of a decade earlier.  Steinert appears to have adopted Orlik's convention of dating the print according to when it was sold or given away, rather than made.  Although my copy is dated 1970, a version dated 1913 is known to exist. 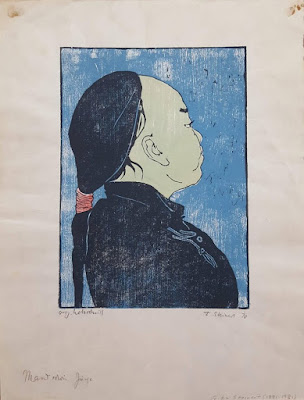 After about two years in Tsingtao, Steinert’s compulsory service was up and he decided to sail to Japan in 1913 on a freighter called the “Daibutsu maru.”  The details of Steinert’s stay in Japan are sketchy.  He spent time at least Kobe and Kyoto, where he went to visited temples, geisha houses, and theatres and saw hundreds of woodblock prints and paintings by important Japanese artists.  He made at least two woodblock prints while in Japan.  One, “Kyoto,” is a rather prosaic depiction of a Japanese torii, probably made shortly upon his arrival. 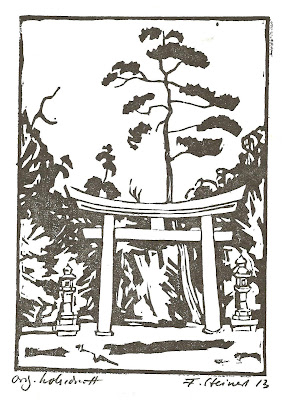 But Steinert’s other print is a surprise -- a multicolor woodblock bust portrait of a geisha seen from behind that is head and shoulders above his Torii print (no pun intended). 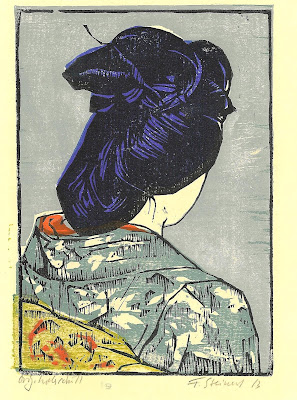 My copy of the geisha print is inscribed “Japanerin” in pencil at the lower left of the sheet (not shown), but it is unclear if this title was written by Steinert or by a subsequent dealer or collector.  Since Steinert was in Japan at the time, a natural question would be if he had any assistance in carving or printing this design, as Orlik did with his own woodblock prints made in Japan.  Given the small image size (14.8 cm x 10.3 cm), the color bleed outside the margin, some unprinted areas around the outline of the hair and collar, and break in the margin line in the upper left, I think we can safely assume that this print was entirely Steinert’s handiwork.  (The wildly uneven baren work on the Mandschoujung print also suggests that it was self-printed.)

Steinert’s memoir contains the following passage (which I have inartfully translated from the original German into English) that could very well be discussing the actual model for this print:  “In order to draw the extremely picturesque costume of the Japanese, I got through the mediation of my hoteliers a petite Geisha rented from a geisha house for 10 yen, who then stood patiently and modeled for me.  Noteworthy was the hairstyle of this Japanese woman which was very elaborately decorated with silver and heavy glossy paper jewelry and which took a long time to style. Since the Japanese woman has her head lying on a headrest at night, this structure is protected.” 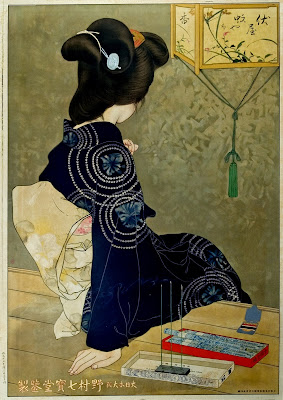 Steinert’s decision to forgo depicting the woman’s face may have been partly a matter of expediency, but it nonetheless seems apparent that he wanted to focus the viewer’s attention on the woman’s hairstyle.   Readers should also know that the Japanese regarded a woman’s neck to be an erogenous zone, and that showing the geisha’s red undergarment peeking out through the collar of her kimono would be considered mildly titillating.  It is also possible that Steinert was inspired by similar perspectives of  Japanese women depicted by Japanese artists, such as in this contemporaneous crayon lithograph advertising poster designed in 1911 by one of my favorite Japanese artists, the Osaka bijin-ga painter and woodblock print designer Kitano Tsunetomi (1880-1947). 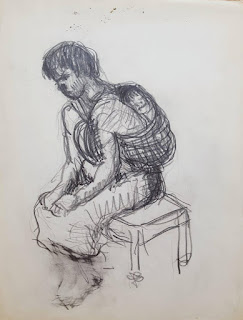 It is not exactly clear how long Steinert stayed in Japan -- probably until he ran out of money -- and it appears he returned to Germany via Russia by the end of 1913.  He briefly resumed his studies with Orlik in Berlin, studies that were soon to be interrupted by  the outbreak of the First World War.  Had he stayed in the Marine Corps in Tsingtao, he undoubtedly would have spent the duration of the war in a P.O.W. camp in Japan.  After the war, Steinert became an art teacher until he ran afoul of the Nazi regime and lost his position.  He also served in the Second World War, after which he moved to Bavaria, where he lived until the end of his life.  He appears to have continued to make expressionist black and white woodblock prints off and on throughout his career, and also he also dabbled in lithography.  Retirement, however, allowed him to concentrate on oil painting, especially portraits and plein air landscapes. 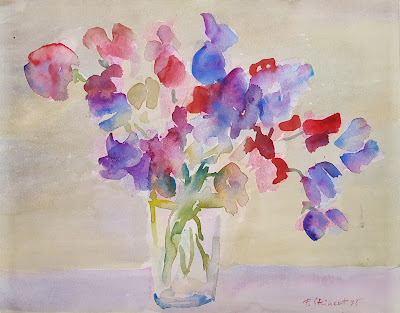 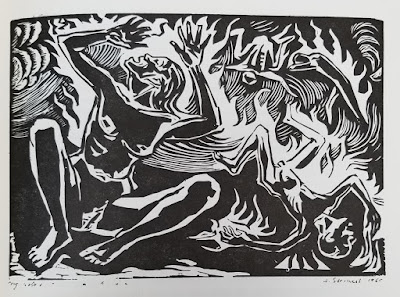 If any reader is aware of other woodblock prints by Steinert featuring Asian subject matter (or has any of the above black and white designs for sale), please let me know.

If a comment box doesn't appear below, click on this link instead: http://easternimp.blogspot.com/2015/06/fritz-steinert.html
Posted by Darrel C. Karl at Sunday, June 14, 2015