Ferdinand Michl (1877-1951) was born in Prague, the son of a German businessman and a Czech mother.  He studied at the Prague Academy under Maximilian Pirner and, later, Franz Thiele.  One of his closest friends at the Academy was the Czech painter and printmaker Tavik Simon.  A scholarship from the German-Bohemian society allowed Michl to study for six months under Johann Herterich at the Munich Academy in 1900.  In 1904, he traveled with Tavik Simon to Paris, where the pair set up a studio together on the Left Bank. 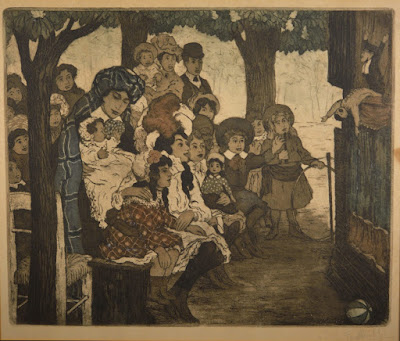 Michl probably had some rudimentary training in etching at the Prague Academy, but surely supplemented that with invaluable technical advice that he picked up through his friendship with Simon.  His Parisian prints of this time period show him producing soft ground etchings, drypoints, and aquatints.  He earned a living providing illustrations for humorous magazines like Le Rire while developing public recognition through exhibitions of his work in the Salon de la Societe Nationale des Beaux-Arts, the Salon d'Automne, the Salon des Humoristes, and the Galerie Georges Petit.  Michl’s favorite museum in Paris was the Musée Guimet because of its holdings of Chinese and Japanese paintings and woodblock prints. 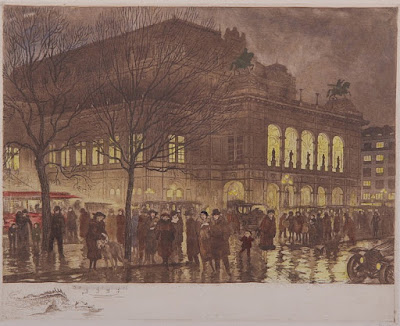 In 1906, Michl became a member of the Hagenbund, where he had exhibited for the first time two years earlier.  In 1909, he left Paris and spent the next five years living in Vienna.  In addition to painting and etching, it is known that Michl began making black-and-white woodcuts at least as early as 1913. 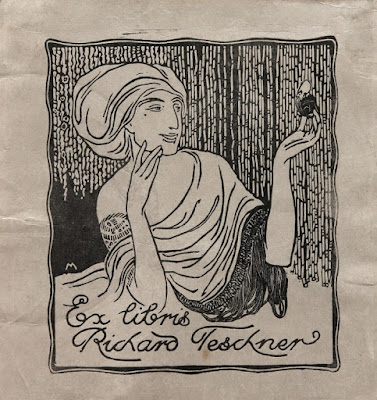 During the First World War, Michl served as a lieutenant in the k.u.k. Bohemian Infantry Regiment but, after six weeks spent in the field, he was captured by the Russian army in Przemysl, Poland in 1915.  He spent the remainder of the war in a series of P.O.W. camps, first in Kharkov in the Ukraine, then in Katav-Ivanovsk and later Steritamak in the Urals, and finally at least two and a half years in Krasnoyarsk in Siberia. 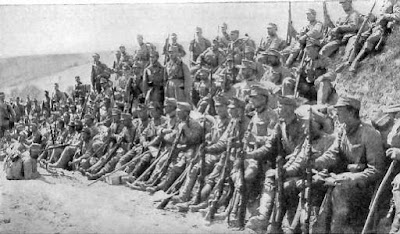 K.u.k.-Infantry at the Eastern Front

In Krasnoyarsk, Michl taught woodblock carving and etching in the P.O.W. camp between September 1916 and 1917.  For a brief time in the spring and summer of 1918, Michl and the Hungarian artist Arthur Jakobovits were even allowed to move out of the camp and into private apartments in the city, where they taught a course on engraving at the municipal school of drawing.  The pair also organized a graphics exhibition in Krasnoyarsk in June 1918.  Otherwise, Michl had to content himself with lesser crafts, such as making labels for power boxes, designing lampshades, and crafting ornamental frames. Michl's P.O.W. camp prints are exceedingly rare and I've been able to locate an image of only one of them: 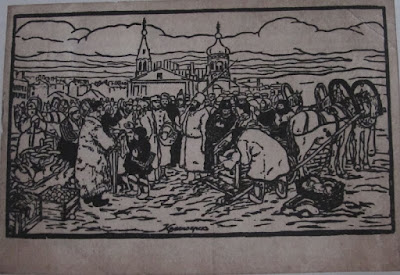 In 1919, the Krasnoyarsk P.O.W.s were eventually united with the Czech Legions, who were stranded in Siberia by the Bolshevik Government, and Michl was taken to Irkutsk.  In 1920, the repatriation of the Czech Legion began.  Beginning in March 1920, Michl spent two months in the port of Vladivostok, which had a large Japanese population in addition to Russians, Chinese, and Koreans.  Michl was so inspired by the melange of cultures there that he later referred to his time in Vladivostok as a “study visit.”  While in Vladivostok, he made a black and white woodblock print of a crab seller (later reprinted as a unnumbered and unsigned supplement to a 1924 issue of Die Graphischen Kunste).  Thereafter Michl sailed back to Europe, with a lengthy stopover in Singapore along the way. 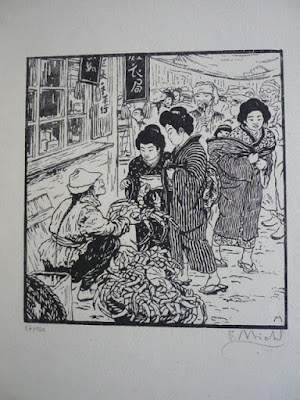 After his return to Europe, Michl would continue to paint and make prints, including monotypes and colored woodblock prints. 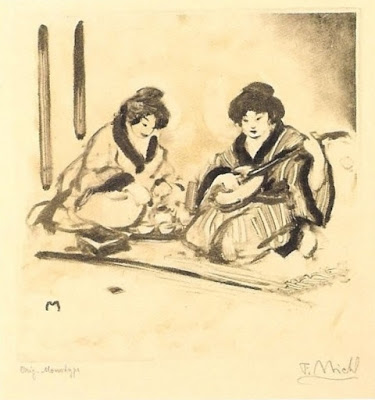 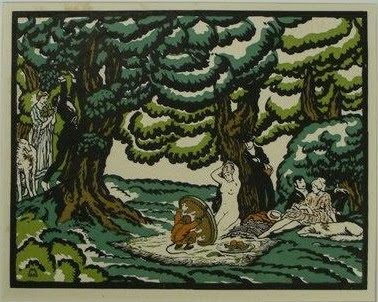 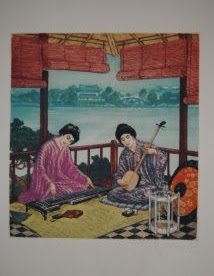 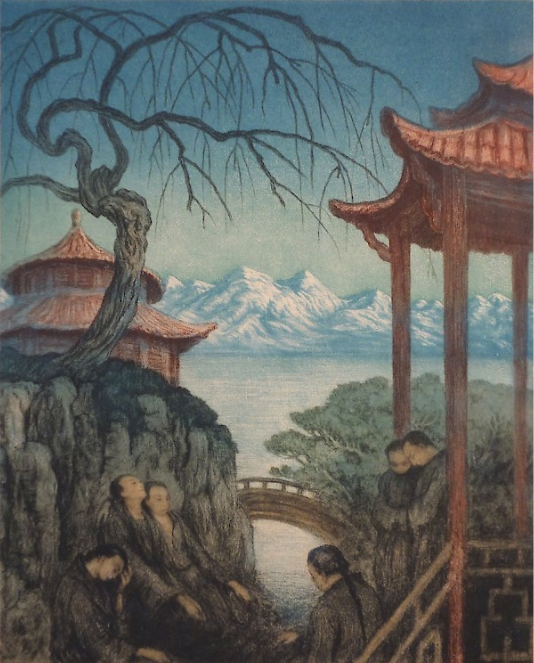 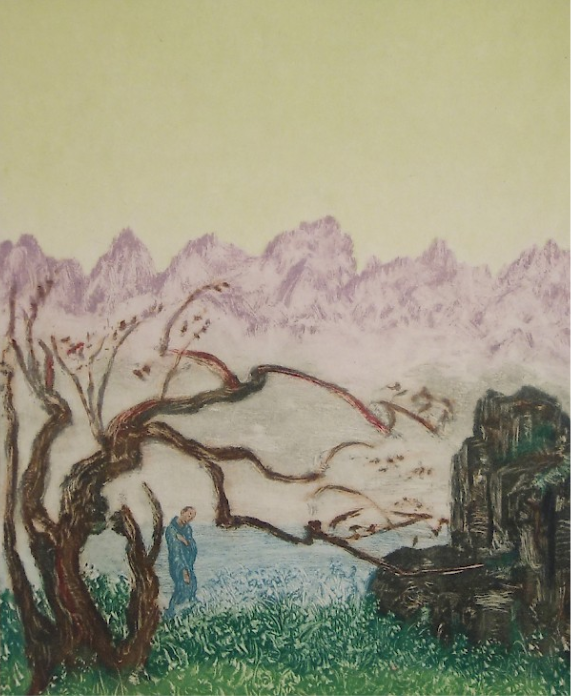 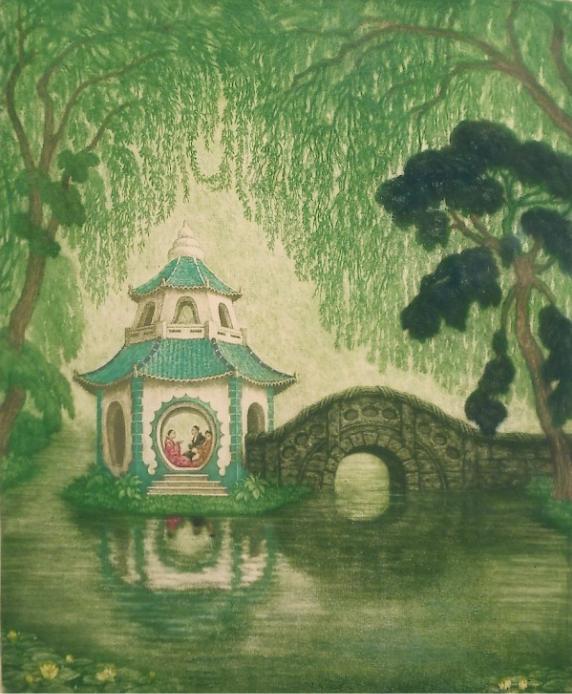 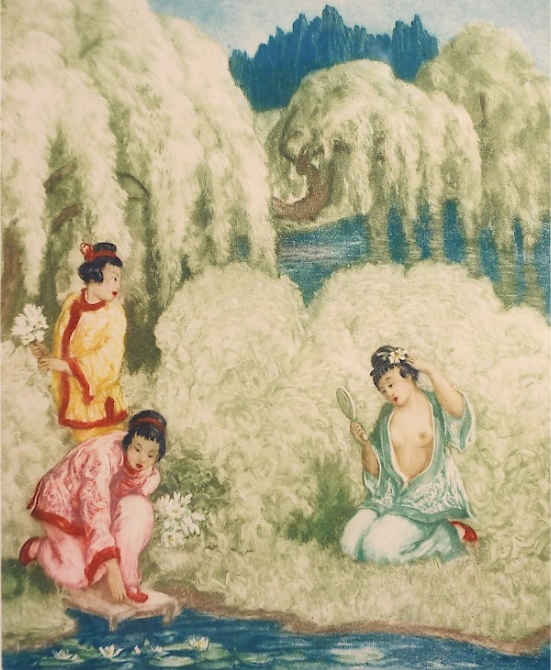 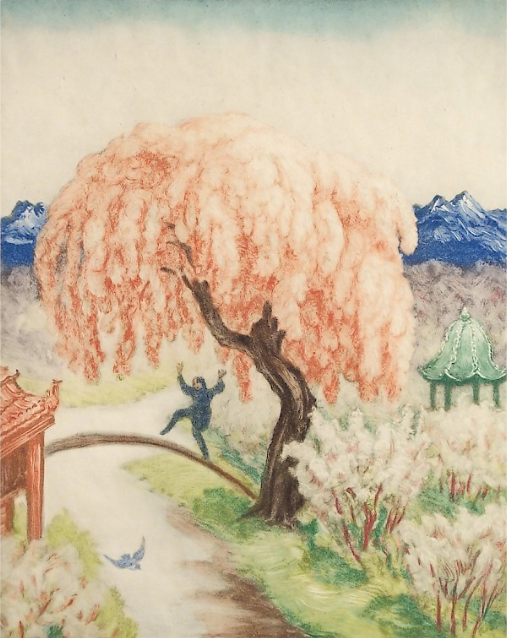 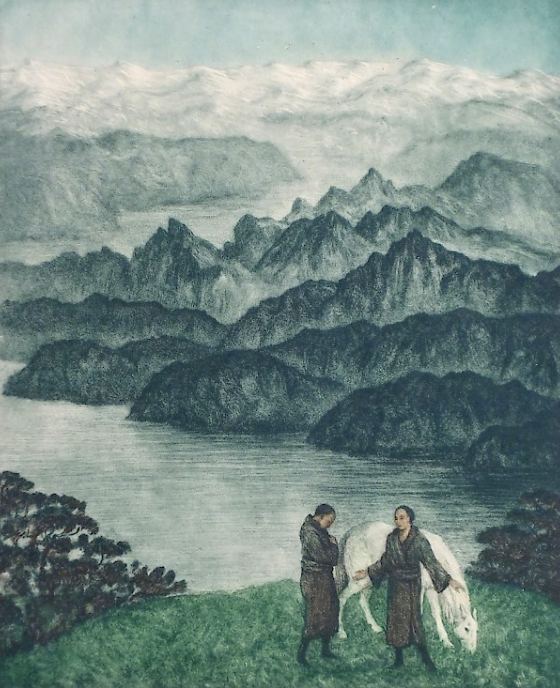 In 1925 Michl issued another portfolio called Aus dem fernen Osten (From the Far East), published by Gesellschaft für vervielfältigende Kunst, Wien.  It consisting of six black and white woodblock prints that focused primarily on Vladivostok’s vibrant market life.  It was evidently issued in two editions, one being a deluxe edition with the prints pencil-signed by the artist.  These may have been commercial reissues of prints he had made in Vladivostok in 1920, or they may have been new prints based on sketches and recollections of his time spent there.  In 1928, Michl contributed two Siberian woodcuts for Der Plenny, a publication by a confederation of former Austrian P.O.W.s.  It is unclear to me at the present whether he created new woodcuts or simply reprinted some of his old designs. 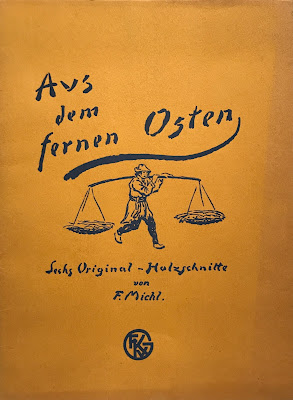 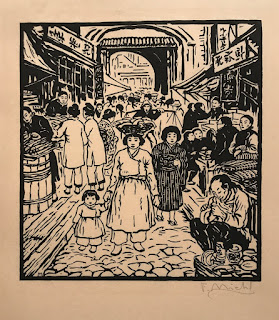 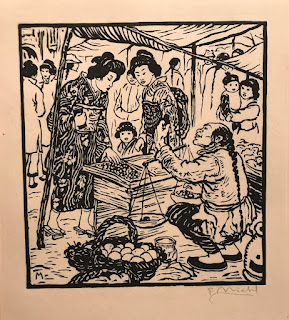 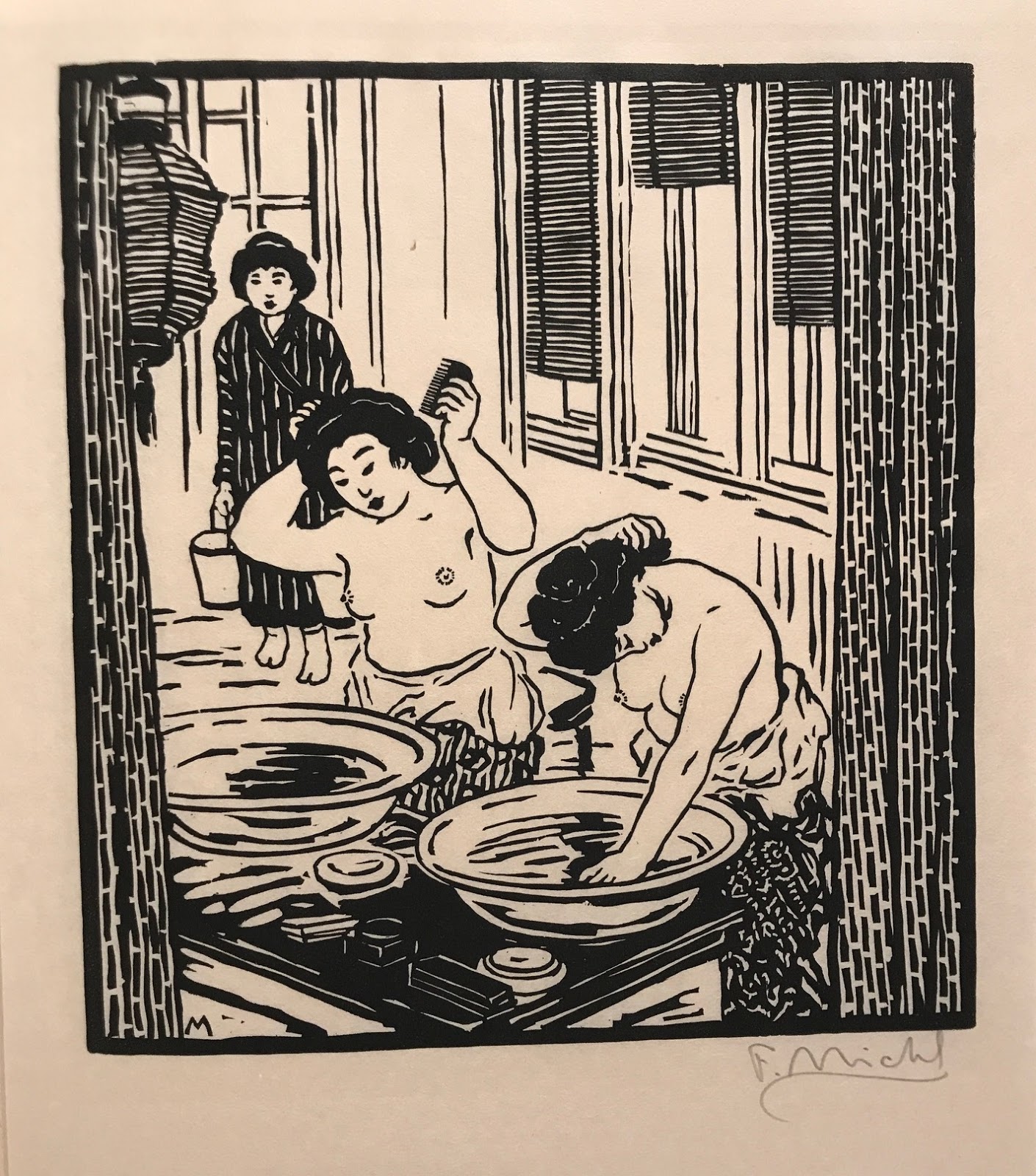 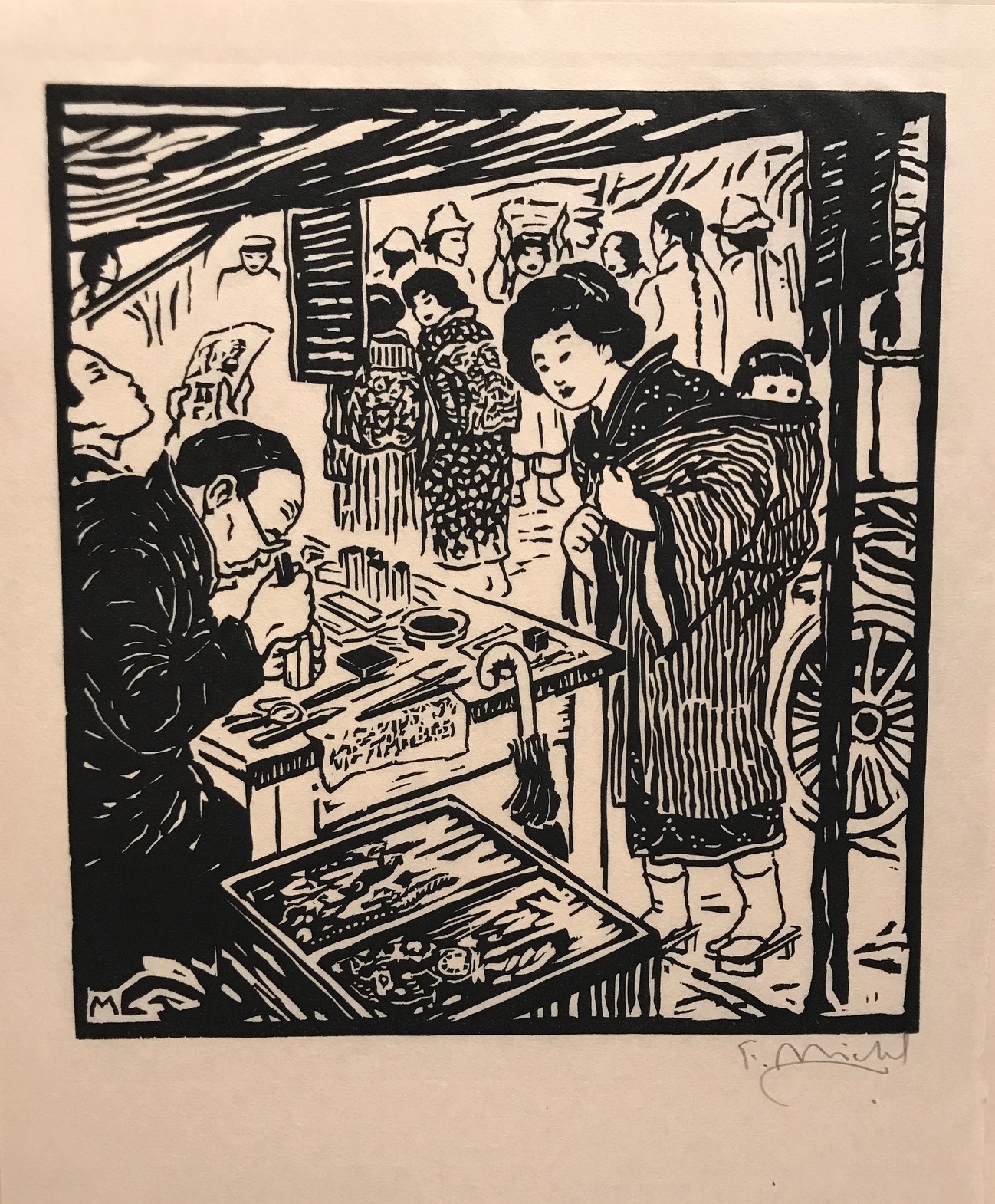 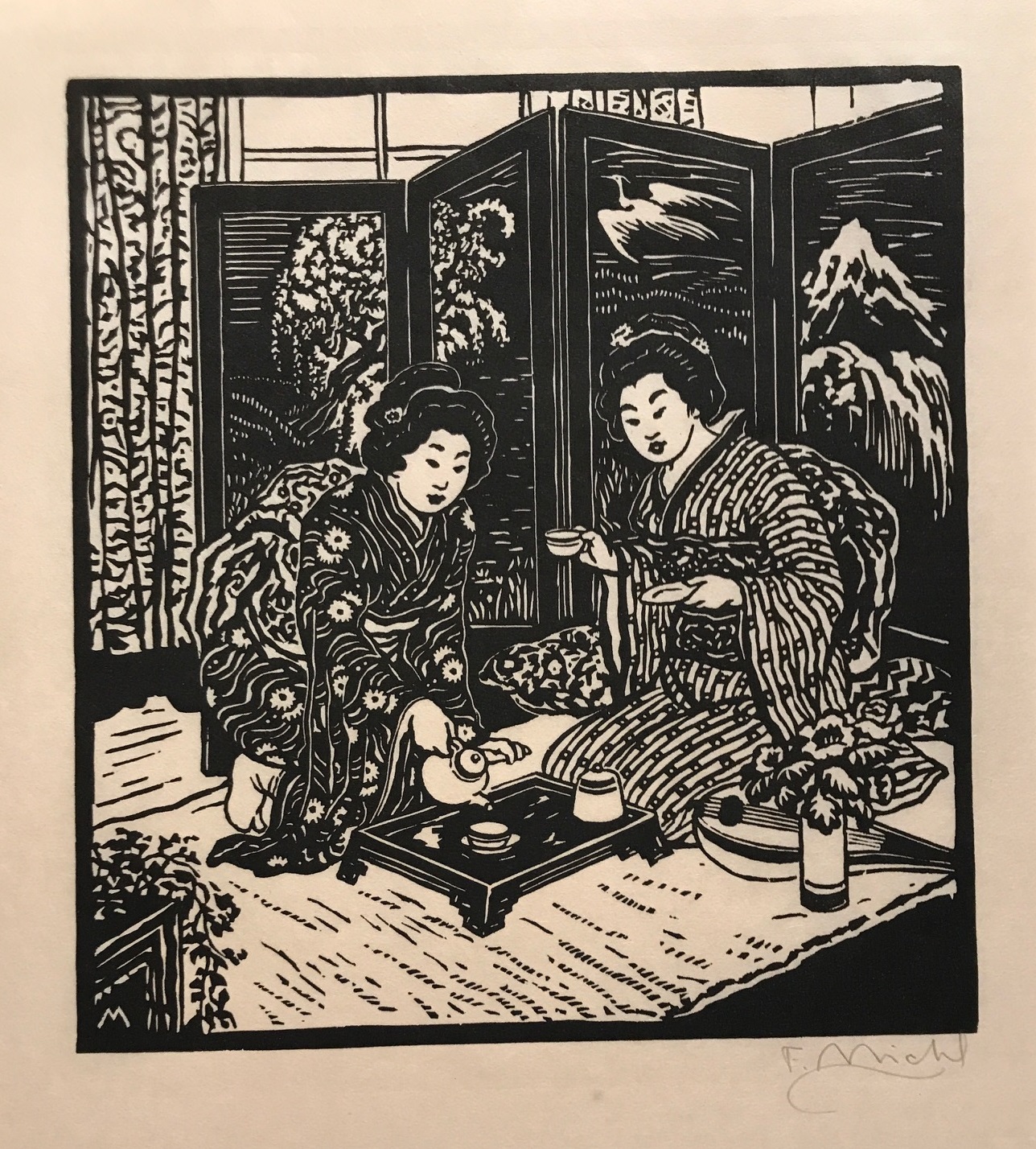 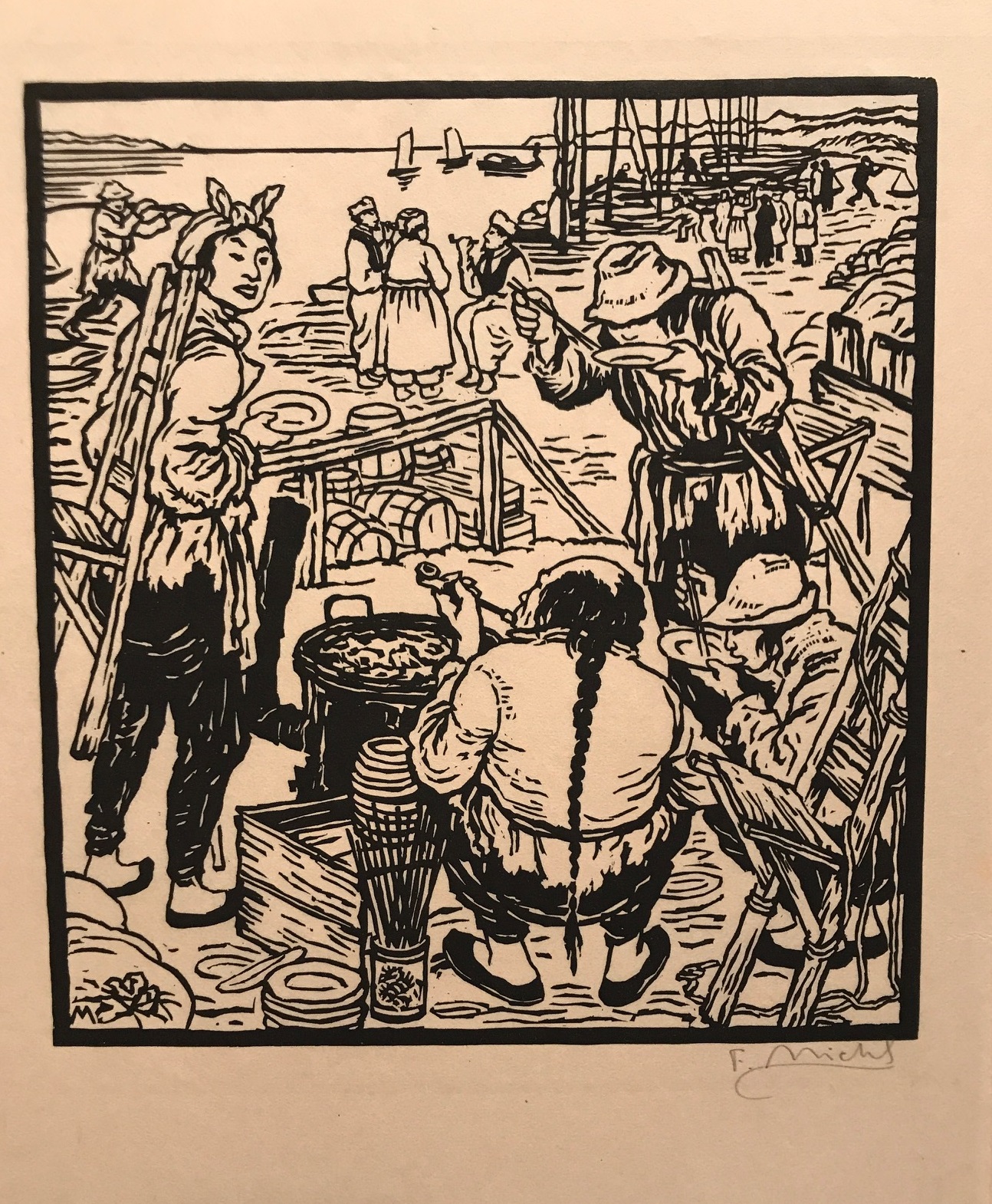 Michl evidently liked the Japanese Women at Tea design so much that he reworked it into a later etching: 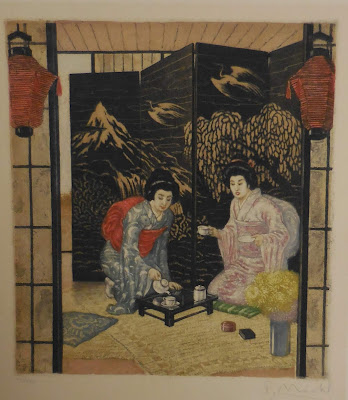 
Michl participated in the German section of the Association Metznerbund, in the German section of the Moderní Galerie in Prague, and in a Sudeten art exhibition in Nuremberg in 1931.  In 1936, he produced two Japanese subject monotypes Japanese and Japanese im Bad (Japanese in the Bathroom).  But the Great Depression and the Second World War took its toll and left Michl so impoverished that by 1948 he was receiving charity gifts of cooking fuel and street shoes from the Austrian Association of Professional Artists. 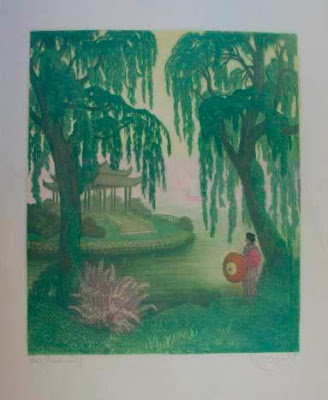 If a comment box doesn't appear below, click on this link instead: http://easternimp.blogspot.com/2017/07/bohemian-printmakers-in-siberian.html
Posted by Darrel C. Karl at Sunday, July 23, 2017