I've previously posted about the woodblock prints and etchings omitted from Richard Miles' catalog "Elizabeth Keith: The Printed Works" (Pacific Asia Museum 1991).  A decade later, Miles, in collaboration with Jennifer Saville, produced a similar catalog called "A Printmaker in Paradise: The Art and Life of Charles W. Bartlett" in connection with an exhibition held at the Honolulu Academy of Arts (HAA) between November 15, 2001 and January 6, 2002. That publication drew upon the extensive Bartlett holdings at the HAA (now called the Honolulu Museum of Art or HMA), Bartlett family works owned by David Dolan and his sister Pamela Dolan Gordon (portions of which are now in my own collection), and material held by other museums and private collectors. 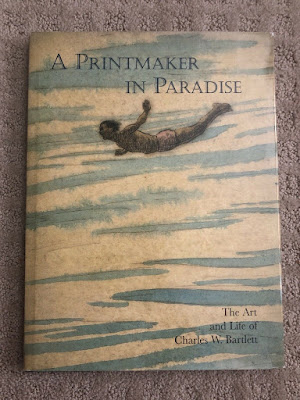 While the Miles and Saville catalog remains the seminal work on Bartlett's graphic work, the authors knew that it was incomplete.  For example, they included a list of titles of etchings that were referenced in Bartlett's ledgers and other archival material at page 169 of the catalog but whose whereabouts were unknown.  At least one of the prints in this list is a variant title of a print included in the catalog under a different name.  Certain others are titles of prints that appear to have been abandoned at the plate or proof stage, although some were subsequently re-worked and issued by Bartlett. 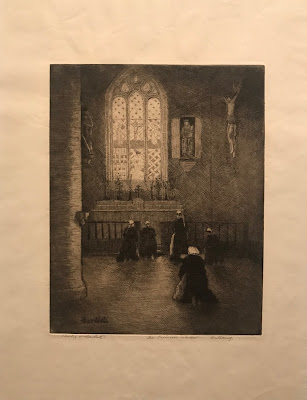 Close-up of inscription for "The Primrose Window.  Brittany."

Note: There is a print title "Primrose Window" included in the list of prints whose whereabouts are unknown on page 169 of the Mile catalog.  The inscription on this etching makes clear that it is not a lost etching, but a variant title for "Brittany Chapel, II." 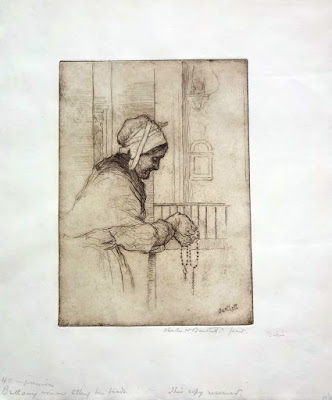 Brittany Woman Telling Her Beads
(aka "The Rosary" or "Telling The Beads") (c. 1908)
Personal Collection
(etching marked "This copy reserved.")

Unfortunately, the majority of these "lost" or otherwise uncatalogued prints are still missing.  But some have surfaced in the interim, as have a few print whose titles and designs were completely unknown to Miles and Saville.  This post is an opportunity for me to share images of some of those "missing" prints. 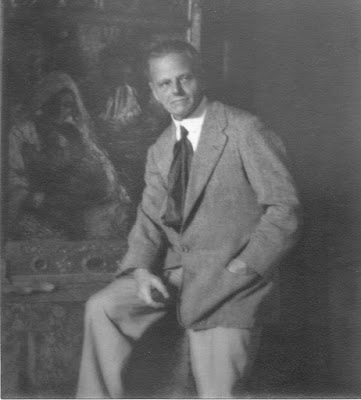 
Bartlet's etchings usually exist in at least two color states, uncolored (printed in black ink although sometimes brown or blue ink was used), and hand-colored with watercolor (in which case the colors sometimes vary from copy to copy).  Bartlett is also known to sometimes add additional detail by hand to the printed etching with ink or watercolor.  The Miles catalog is limited to one example of each print design, and I have not attempted to catalogue these hand-painted variants.  It is also possible that variant color states exist for some of the woodblock prints beyond those noted in Miles.  My focus, however, is on different states from those illustrated in Miles. 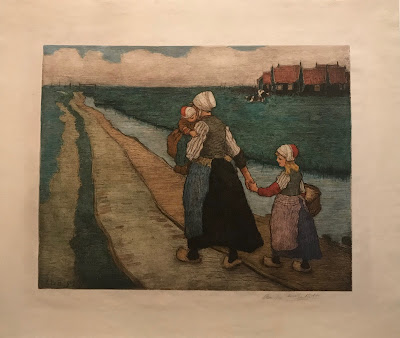 #57a By the Dike Side, Marken, Holland (1912)
Personal Collection
(etching with drypoint hand-colored with watercolor) 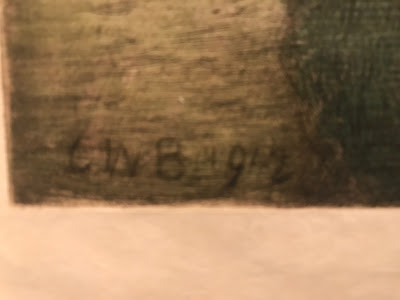 Close-up of the inscription in the plate

Note: Early state signed in plate "CWB 1912" instead of "Bartlett."  This state might be what is denominated "Trekking Along The Dike" in the list of unaccounted for prints on page 169 of Miles. 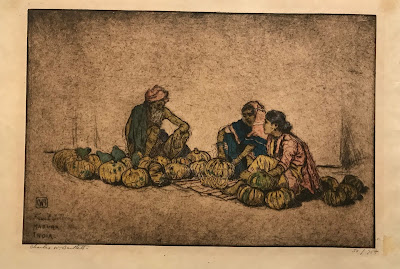 Note: This state essentially omits the carved background pillars and the stone tiles. 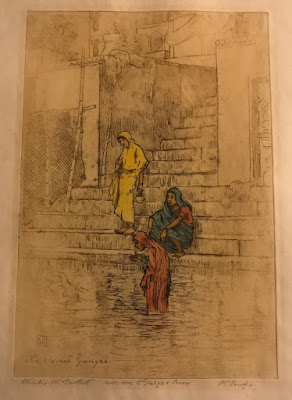 Note: This state omits considerable background detail and any inscription in the plate.  The initials "CWB" and the title "The Sacred Ganges" were added in pencil on this copy. 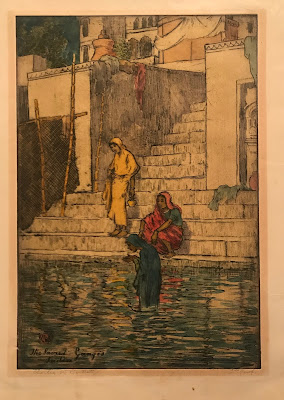 Note: The etching found in the Miles catalog appears to be another proof copy, whereas the final  state is illustrated below: 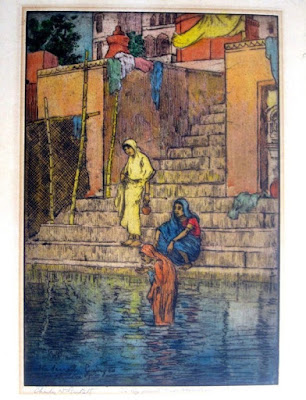 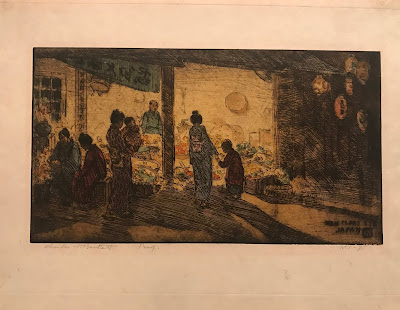 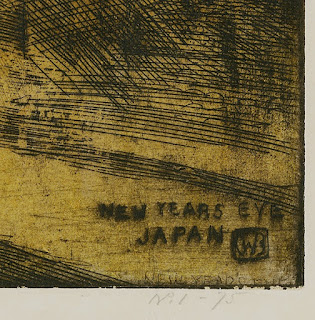 Close-up of the plate inscription

Note: The version shown in Miles appears to be printed from a large plate that was subsequently cut down to shorten the extended shadows depicted at the bottom of the design.   The dimensions of the Miles version are 7-1/2 x 10-7/8 inches, whereas the dimensions of this copy are 6 x 10-7/8 inches.  Although numbered, the colored copy also says "Proof."  Eagle-eyed readers will note that the colored proof contains two inscriptions, "New Years Eve Japan CWB" and "New Year's Eve," the latter left over from the larger plate used to print the Miles version. 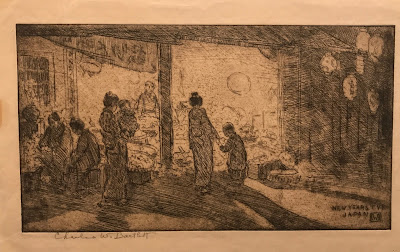 Note:This copy lacks the remnants of the second (original) title in the plate, and thus appears to be the final state of the design. 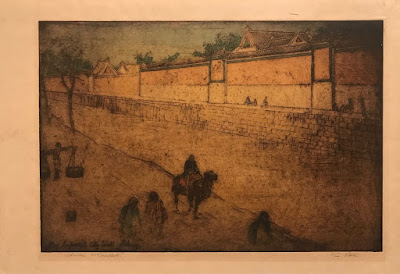 Note: This proof state lacks some of the figures and camels in the foreground. 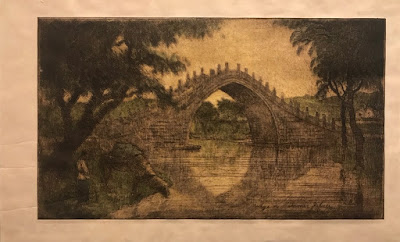 Note: This state might be what is denominated "Camelback Bridge" in the list of unaccounted for prints on page 169 of Miles.  It differs from "Bridge in Summer Palace, Peking, II" in the Miles catalog by depicting the landscape on the other side of the bridge in greater detail, especially under the center archway, and by more extensive work in the water. 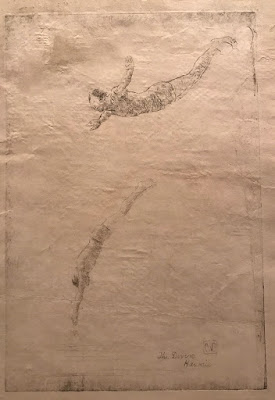 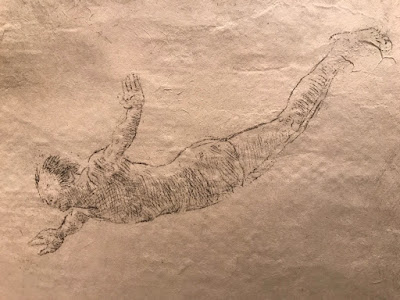 Close-up of the top diver 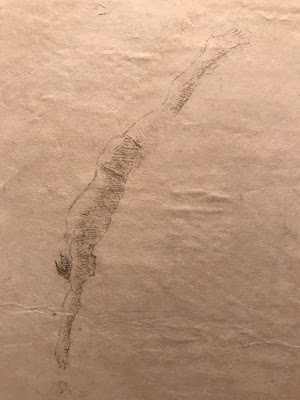 Close-up of the bottom diver

Note: As can be seen, Bartlett's original composition featured two divers and no clouds, although the diver at the bottom was later dropped.  However, even the top diver underwent further revisions that required a new plate to be etched, as the angle of the diver's head and the placement of the man's arms are different in revised print. 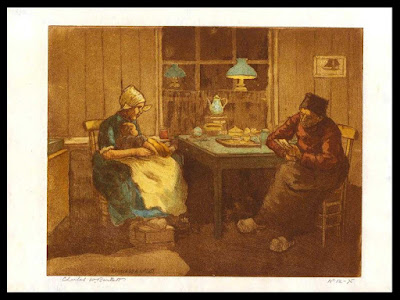 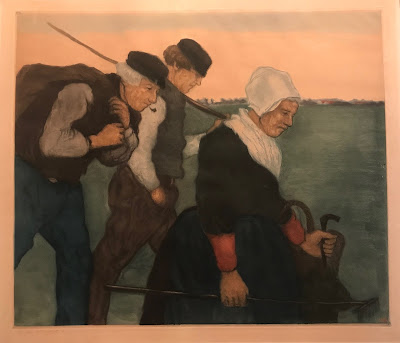 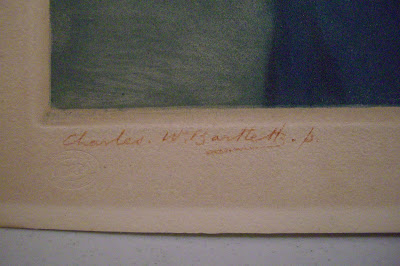 Close-up of the publisher's seal 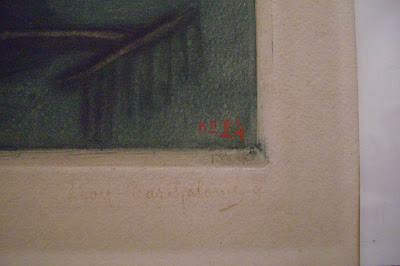 Close-up of the printer's signature

Note: This print might be what is denominated "Coming From Work" in the list of unaccounted for prints on page 169 of Miles.  Unlike most of Bartlett's intaglio prints which were self-published, this print published by an unknown publisher in Brussels.  Under Bartlett's signature at the bottom left, there is an embossed oval that reads "EPR D'Artiste Bruxelles" surrounding illegible initials that appear to read something  like "B&Co."   The printer's name signed at the lower right appears to read something like "Leoy Bartholomey [Barthelemey?]." 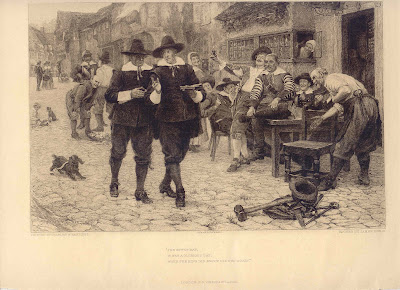 Note: Dobie's etching is based on a 1888 painting that Bartlett exhibited at the London Royal Academy.  The models for the two central puritans were Bartlett himself and his brother Joseph. 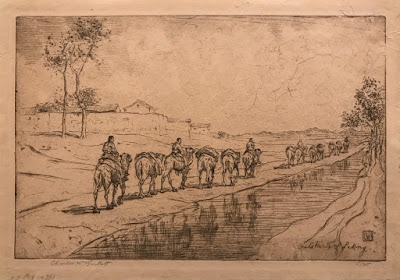 Note: This print might be what is denominated either Tartar Wall and Moat, Peking. I or II in the list of unaccounted for prints on page 169 of Miles.

Note:  The HMA has the original copper plate for this etching.
Unless otherwise indicated, the following is a list of the remaining titles/descriptions of etchings for which impressions are as yet still unknown.  Titles provided inside brackets are descriptive ones.  Entries marked with an asterisk denote that woodblocks or copperplates for the designs are held by the HMA or in private collections. 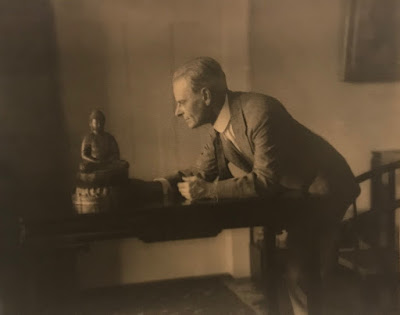 If anyone has a print which they believes corresponds to one of these titles, or any other uncatalogued Bartlett print, please contact me so I can update this post.

If a comment box does not appear below, click on this link instead: http://easternimp.blogspot.com/2019/05/charles-w-bartlett-uncatalogued-prints.html
Posted by Darrel C. Karl at Monday, May 13, 2019