Completing The Picture: The Amherst Project

Running through July 24th at Amherst’s Mead Art Museum is an exhibition called “Unimaginable By One Mind Alone: Exquisite Corpses from the William Green Collection of Japanese Prints.”  William T. Green was the founder of the Ukiyo-e Society of American (now called the Japanese Art Society of America) and a voracious collector of Japanese prints.  Green often purchased prints in combined lots that mixed good impressions of fine designs with poor impressions and single sheets that had become separated from the diptychs or triptychs of which they were originally a part.  As a consequence, nearly 200 prints in the 4,000+ Green print collection at the Mead Art Museum constitute “orphaned” prints.  It was the brainstorm of the show’s organizer, Bradley M. Bailey, Associate Curator of Asian Art at the Ackland Art Museum at the University of North Carolina at Chapel Hill, to make lemonade out of these orphaned lemons. 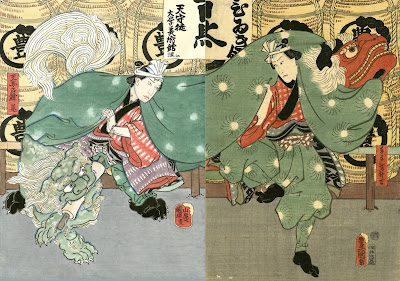 Left panel: Muppet: Frantically Busy (2016) by Akira Yamaguchi
Courtesy of Akira Yamaguchi and Mizuma Art Gallery, Tokyo
(ink on paper)
Right panel: Kabuki actor Kawarazaki Gonjurō I as Tekomai Masukichi,
from the play The Weaving Together of the Sun, Moon,
and Stars at Day and at Night (1859); gift of William Green
(woodblock print)

Bailey took a page from the Surrealists who, in Paris in 1925, gathered to play a game where each participant would write a fragment of a sentence that the next person, without seeing the prior fragment would complete.  According to the poet Simon Khan, it was Jacques Prévert who contributed the initial phrase “The Exquisite Corpse,” to which another contributed the phrase “will drink the new wine,” and so forth.  The Exquisite Corpse was, in Khan’s words, “unimaginable by one mind alone.”   Eventually, someone suggested they play the game with partial drawings instead of words.  “[A]stonishing amalgams,” Khan wrote, were created, fusing human heads to inanimate objects with reptilian legs ending in hooves.  This game would go on to inspire Surrealistic art and theories that explored the expression of the unconscious and the creative potential of collaboration.

For the current exhibition, Amherst commissioned a number of contemporary artists to select orphaned prints from the Green Collection and extend them into full compositions in the spirit of the Exquisite Corpse.  Each participant was given complete freedom to create anything they could imagine so long as their creations were connected to the lines of the original print. 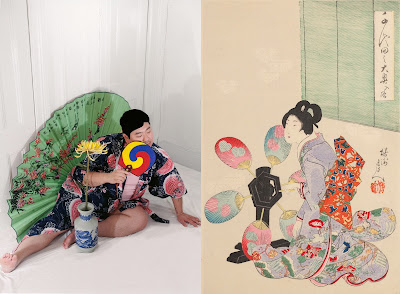 Most of the participating artists produced works in a medium other than woodblock prints.   Japanese artist Akira Yamaguchi contributed ink-and-watercolor drawings.  American artists Ely Kim contributed a pair of digital prints.  American photographer Gregory Vershbow photographed on expired, hand-processed color-positive film drawings that he had handcolored in Photoshop and printed off his computer.  The UK-based design team Studio Swine, founded by Japanese architect Azusa Murakami and British artist Alexander Groves, responded with a mixed-media sculpture.  The Scottish artist Paul Binnie, however, was the only artist to supply original woodblock prints to the project, in a limited edition of 15 each. 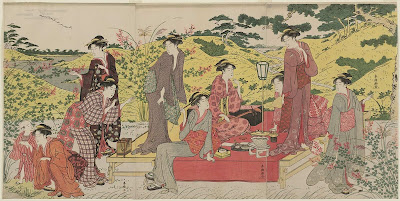 Binnie’s first print for the Amherst exhibition, A Record of Modern-Day Customs, forms the right panel for a horizontal triptych called A Picnic Party at Hagidera by Katsukawa Shunchō and employs colors designed to match the faded colors of Green's copy of the center panel of the triptych.  In keeping with the spirit of the comically absurd, dreamlike collaborations made by the Surrealists, Binnie composed a view of an imaginary Japan of the 1780s that had not been closed off to the West.  Just as Meiji-era prints sometimes depicted Japanese women wearing bonnets and Victorian-style hoopskirts with bustles, here Binnie prominently features a woman in a dress of the style of the court of Louis XVI wearing a high powdered wig surmounted by a galleon in full sail (called a “pouffe a la victoire”) and drinking tea from a Sévres-handled teacup.  There are other visual puns in the print that I will leave for eagle-eyed viewers to decipher. 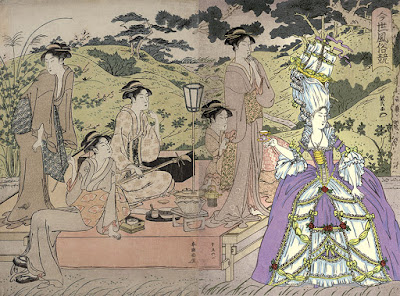 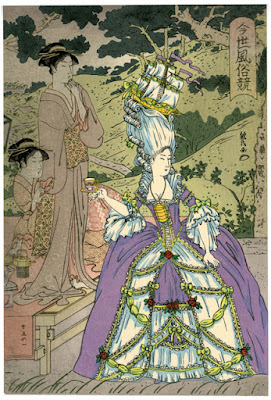 Larger view of the right panel, A Record of Modern-Day Customs (2015)
by Paul Binnie
Courtesy of the Mead Art Museum
(woodblock print)

Binnie also produced a commercial stand-alone variant of this design in a more modern (and unfaded) color scheme called Konze Fuzoku Kurabe (A Comparison of Contemporary World Fashion).  This stand-alone print, in an edition of 50, is available for sale at Japanese print galleries like the Saru Gallery in the Netherlands and Scholten Japanese Art in New York City. 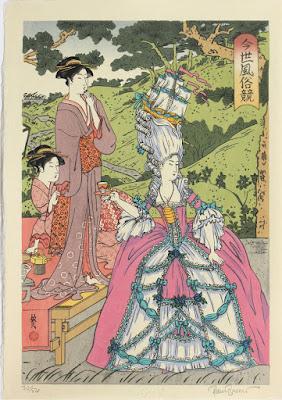 Binnie’s second contribution forms the top half of a vertical samurai diptych from 1867.  Unlike with the previous design, where the right Shunchō panel was known but simply missing from Mead Art Museum’s collection, the artist of the bottom panel is a currently unknown Utagawa school artist and original top panel has not as yet been located.  Consequently, this gave Binnie considerable freedom to create a print in his own personal style unencumbered by anything other than a tiny portion of the samurai’s lower robe and the placement of the man's left hand. 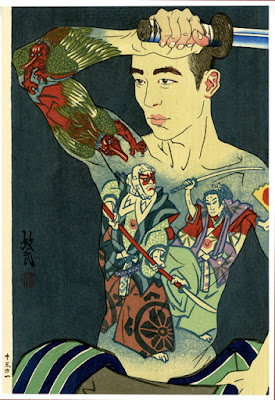 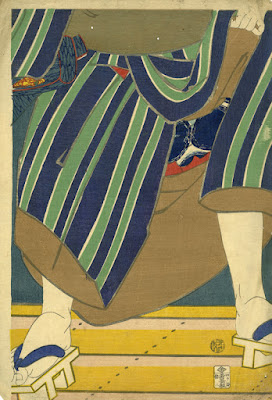 
In this print, called Tattooed Man, Binnie used an actual model for the top half of the samurai’s body.  The tattoo on the samurai’s chest, however, is imagined, loosely based on an e-kanban (hand-painted poster) painting by Torii Kotondo (1900-1976).   It depicts (on the viewer’s upper right) Minamoto no Yoshitsune (1159-1189), a general of the Minamoto clan in the late Heian and early Kamakura period, called “Ushiwakamaru” in his youth.  Binnie has his model holding a short sword in a pose that echoes that of Ushiwakamaru in the tattoo.  The figure on the bottom left side of the tattoo is the warrior monk Benkei, who Ushiwakamaru vanquished in a famous duel on the Gojō bridge in Kyoto. Ushiwakamaru was taught the art of swordmanship as a boy by the tengu, a type of legendary spirit creatures found in Japanese folk religion depicted as anthropomorphized birds of prey with unusually long noses.  The tengu spirits depicted in the tattoo on the man’s arm are entirely Binnie’s own invention. 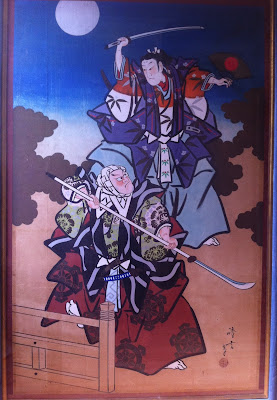 
Binnie’s commercial stand-alone variant, produced in an edition of 50, is called Ushiwakamaru to Benkei.  The print employs a different color scheme and somewhat different printing effects, most noticeably in the background of the print.  It is signed in silver kanji in the image, and the title of the print is blind printed in the lower left margin. 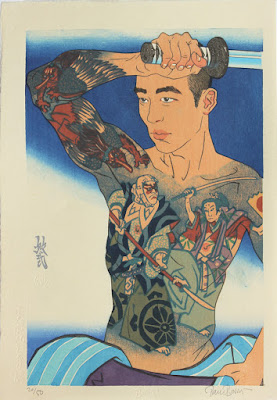 No doubt some readers will view this exhibition as being in the nature of a gimmick or a stunt.  However, it should be noted that the Japanese artists have their own history of collaboration, known as "gassaku," that pre-dates the Surrealists.  These are hanging scroll paintings, hand scrolls, albums, or even screens executed by two or more artists.  Many were created at social events like New Year parties or literary gatherings to commemorate the event and who was present.   Sometimes the images were painted on the same sheet to form a harmonious design, sometimes with even interplay between the images.   Sometimes the images were painted on the same sheet divided by lines from one another, and sometimes they were painted on separate sheets that were then pasted together to form a collage of seemingly unrelated images.  (For more information on gassaku, see Gassaku: Japanese Co-Productions by Jon de Jong, Andon 76 at 52-61 (2004).)

Even in the case of woodblock prints, print collaborations exist, especially between teacher and pupil.  For example, one artist may draw the figures while another might depict the background landscape.  However, examples with different artists designing different panels also exist, as in this early diptych collaboration by Katsukawa Shunchō and Shunkōsai Hokushū: 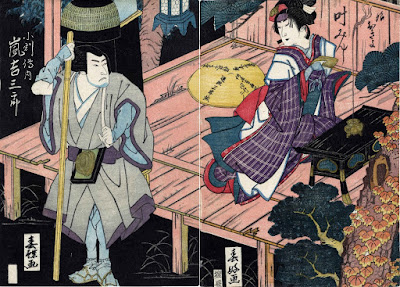 Left Panel: Arashi Kichisaburō II as Kowari Dennai in the play
Katakiuchi ura no asagiri (Revenge along the Bay in Morning Fog) (1815)
by Katsukawa Shunchō
Right Panel: Kano Minshi I as the daughter Okiyo in the same play
by Shunkōsai Hokushū
Courtesy of the Lyon Collection
(woodblock print diptych)

Thus, the Amherst project can be seen as a modern-day variant of a Japanese tradition that is in fact several hundred years old.

If a comment box does not appear below, click on this link instead:  http://easternimp.blogspot.com/2016/06/completing-picture-amherst-project.html
Posted by Darrel C. Karl at Tuesday, June 07, 2016