At the turn of the last century, when Japonisme was at its height, one woman became the toast of two continents.  She performed before heads of state, she inspired playwrights and musicians, and she was immortalized by many noted artists of the day.  Her name was Sadayakko (1871-1946).

She was born Sada Koyama, the daughter of a man from an impoverish samurai family.  After the death of her father, she is adopted at age seven by the owner of the Hamada geisha house in Tokyo.  She is trained to sing and play the koto, and she shows a particular aptitude for dance.  Unusual for the time, she is sent to a local Shinto priest to be taught to read and write.  At age 12, she makes her debut as an apprentice geisha. 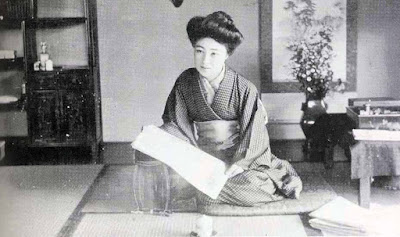 Count Hirobumi Ito, Japan’s first Prime Minister, contracted at great expense for the right to deflower Sada in 1886 when she was 15.  Yakko (which became her geisha name) would be Ito’s mistress for three years before he released her, although he would remain her friend and adviser for the rest of his life.  Yakko would thereafter number among her subsequent patrons and lovers a bank president, a sumo wrestling champion, and the kabuki actor who would become Utaemon V.  However, knowing that a geisha’s career was time-limited, she started to look for a suitable husband. 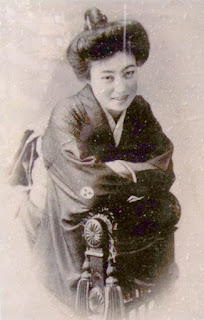 That man would be Otojiro Kawakami, known as the Liberty Kid.  He was a Liberal party actor who performed in political, agitprop amateur plays.  He came to fame performing what was known as the Oppekepé song, a satirical number that attacked the government, the rich, those who embraced Western ways, etc.   Yakko saw him perform in the summer of 1891, and the pair began to have an affair, despite the fact that he was socially inferior to her other clients.  After a trip to Paris, Kawakami starts New Wave theatre in Japan, and in October 1893 he and Sada formally wed. 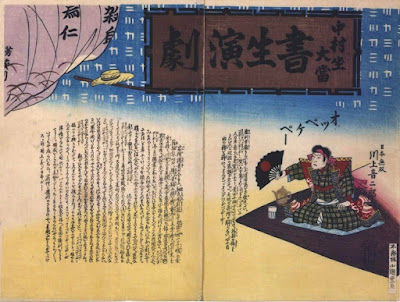 In 1894, Kawakami starts to perform jingoistic plays about the Sino-Japanese War.  A number of woodblocks show depict Kawakami in scenes from such plays.  In 1896, he opens the Kawakami-za, one of Japan’s very first modern theatres designed on the French model with electric lighting.  Kawakami, however, was hopeless with money, and was constantly fending off creditors.  After a disastrous run for Parliament in 1898, he loses his theatre.  However, an opportunity arises the following year that would change the course of Sada’s life.

Yumindo Kushibiki, a Japanese émigré who made his fortune catering to the Japonisme craze, convinces Kawakami and his troupe to tour America.  Sada accompanies him, not as an actress but as a wife who will support him behind the scenes.  Despite the fact that she has never acted on stage before, she is surprised to find on their arrival in San Francisco in May 1899 that she has been advertised as a famous Japanese actress and one of the stars of the troupe by Kushibiki.  Being told that Americans would have no interest in their Sino-Japanese war plays, Kawakami quickly cobbles together a program of condensed kabuki scenes, culminating with Sada performing the dance from “Musume Dojoji (The Maiden at Dojoji Temple),” where a spurned maiden turns into a serpent and kills her lover.  She adopts “Sadayakko” as her stage name, a combination of her given name and her geisha name.  (I've used "Sadayakko" in this text, but followed foreign spellings when they appear in specific contexts.)

The U.S. tour, however, turns out to be underfunded, and a replacement for Kushibiki as manager absconds with their money without settling their rent for a theatre.  The troupe is thrown out of their hotel and forced to arrange their own bookings.  They play Seattle, Takoma, and Portland before heading for Chicago, where their money runs and they nearly starve to death before managing to secure a booking.  Thereafter, they barnstorm through the Great Lake states before arriving in Boston in time for the 1900 New Year’s celebration.  But the trip has taken its toll.  Two members of their company die in Boston, and Kawakami has a severe case of appendicitis. 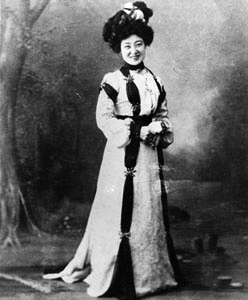 Note: The article in L'Illustration claims that it depicts Sadayakko as Tomoye Fujin
(the Japanese Desdemona) in Kawakami's February 1903 production of Othello.

At the same time, Kawakami starts to develop a formula that would please Western audiences.  He takes great liberties with traditional kabuki plays, combining characters and plots.  Dialogue was minimal, since it would not be understood anyway.  Instead they concentrated on plots and actions that could be universally followed, such as romance, swordplay, revenge, madness, and death.  Their first success was called “The Geisha and The Knight,” a combination of “Sayaate (The Duel)” and “Dojoji.”  To get some sense of this mash-up, imagine, by way of analogy, a play that starts out like a Japanese version of Romeo and Juliet where the leads morph into Lord and Lady MacBeth in the second act.  After meeting Henry Irving and Ellen Terry who were performing “The Merchant of Venice” in Boston and who give them introductions to use in London, the Kawakami troupe begins to perform their own Japanese reworked version with Sadayakko as Portia. 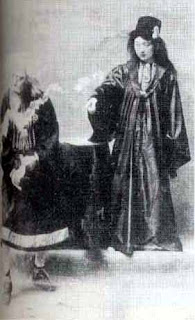 Thereafter, the Kawakamis are invited by the Japanese ambassador to perform in Washington, D.C. with an audience that included President McKinley and his wife.  They then proceed to New York City, where Sadayakko appears on the cover of Harper’s Bazar and takes instruction at the New York Actor’s School.  David Belasco, author of the play “Madam Butterfly” has his leading lady coached by Sadayakko on how to walk and talk like a geisha.  The troupe also performs their own Japanese version of the then-controversial play “Sapho.”

The troupe sails to London, arriving in May 1900. They are welcomed by Arthur Diosy, vice-chairman of the Japan Society.  Sir Edward Arnold, the poet with a Japanese wife, takes them under his wing.  More and more, Sadayakko incorporates Western style acting into her performances.  While in London, the troupe performs at a party that includes the Prince of Wales and Lady Randolph Churchill.

On June 27, 1900, the troupe leaves London for Paris.  They are booked by the dancer/impresario Loie Fuller to perform at the 1900 Universal Exposition with Sadayakko billed above Otojiro.  They are the hit of the exposition, performing 2 or 3 times a day but leaving them with little time to sightsee or to socialize.  Rodin wanted to sculpt Sadayakko, but she was too busy.  Alfredo Müller designs a dramatic, kakemono-shaped poster of Sadayakko.

The Kawakami troupe is invited to a garden party at the Elysée Palace hosted by President Émile Loubet where Sadayakko performs her dance from “Dojoji.”  Her dancing is an inspiration to a young Isadora Duncan and Ruth Saint Denis.  Andre Gide claims to have seen her perform six times.  Hearing her play the koto, Debussy decides to incorporate Japanese music into Le Mer.   Italian caricaturist Leonetto Cappiello depicts her as the maddened geisha for La Rire.  Georges Scott similarly draws her for L’Illustration. 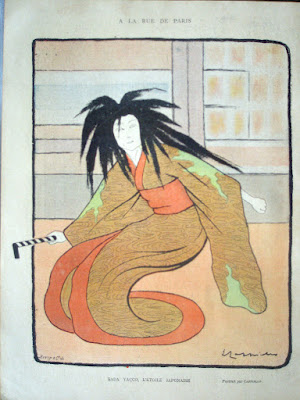 One artist who was particularly taken with Sadayakko was Pierre-Georges Jeanniot.  He drew and painted her multiple times, and also based an etching on one of his paintings.  A cropped version of one his drawings was used for the cover of Judith Gautier's Les Musiques Bizarres à l’Exposition de 1900. 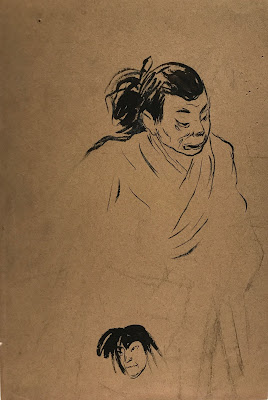 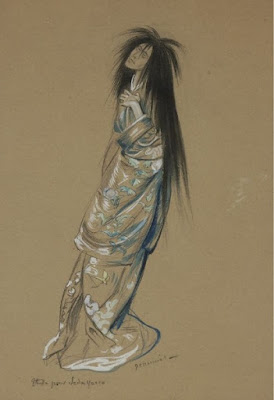 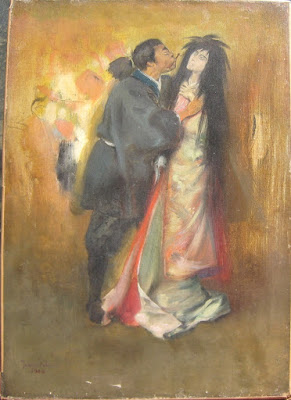 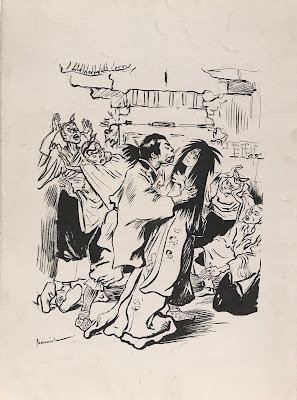 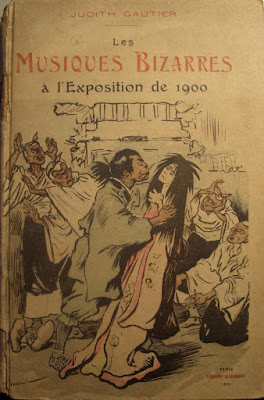 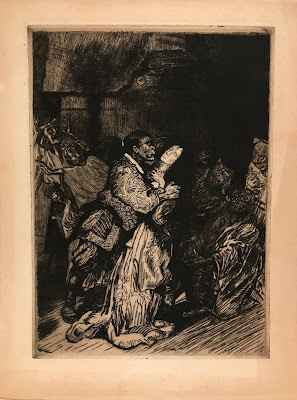 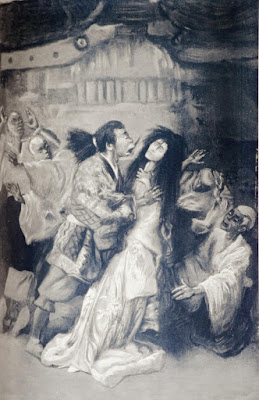 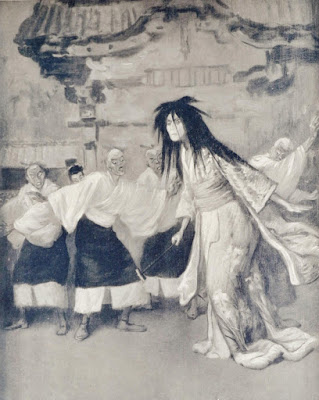 At Fuller’s request, Otojiro is forced to add hara-kiri to his death scene in the play “Kesa, The Faithful Wife.”  Sadayakko then adds hara-kiri to the end of “The Geisha and The Knight,” and all three brothers commit hara-kiri in “The Soga Brothers.”  Unlike the squeamish American audiences, French audiences with their taste for bloody Grand Guignol theatre eat it up.  Australian painter Rupert Bunny, however, eschews the play’s violence and paints a very Whistlerian portrait of Sadayakko as Kesa. 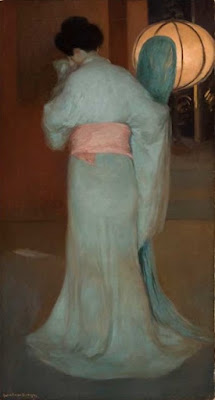 The Art Nouveau ceramist Edmund Lachenal designed a biscuit porcelain figurine of Sadayacco in collaboration with the Swedish sculpturess Agnès de Frumerie.  Although generally dated to 1900, Lachenal's collaboration with de Frumerie continued until 1908, and thus could have been produced in connection with Sadayakko's second or even third and final trip to Paris. 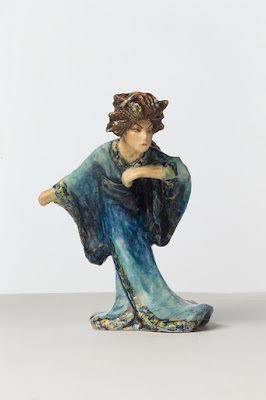 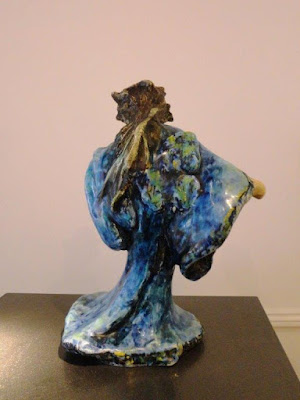 In early November, the troupe leaves for Japan, eventually arriving in Tokyo on January 19th after resting at Arima Spa.  They had signed a contract with Fuller for a second summer tour beginning June 16, 1901, but they were homesick and they needed to hire additional members and supplies for their expanding act.  (As luck would have it, Sadayakko was out of the country for most of Orlik’s time in Japan.  In late December 1900, however, Orlik received a card from Max Lehrs, the director of the Dresden Kupferstichskabinett, who had seen Sadayakko act and dance at the Paris Exposition in October.  There is a possibility that Sadayakko's and Orlik's paths crossed in Tokyo in late January or February 1901 during Orlik’s final weeks in Japan, but I have not found any concrete evidence on this point.) 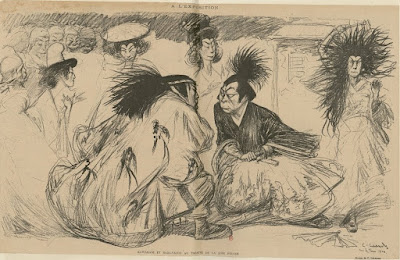 On April 10, 1901, a troupe of 20 actors plus musicians, dressers, hairdressers, and Otojiro’s bastard son Raikichi leave for Europe.  A woodblock print by Utagawa Yoshiiku dated May 11, 1901 is issued after their departure, clearly modeled on the photo of Sadayakko on the cover of Le Théatre magazine that came out while she was in Paris. 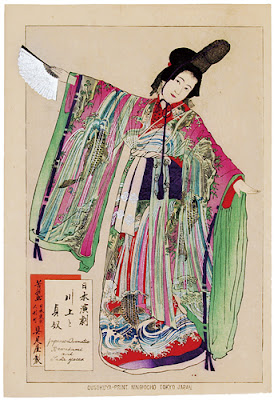 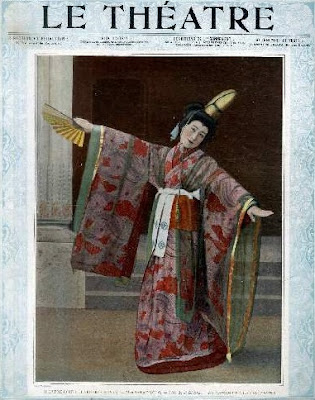 For more about the life and career of Sadayakko, I recommend Lesley Downer’s “Madame Sadayakko: The Geisha Who Bewitched the West” (Gotham Books 2003), the source of most of the biographical information in this post.


If a comment box does not appear below, click on this link instead:  http://easternimp.blogspot.com/2015/09/sadayakko-through-artists-eyes-part-1.html
Posted by Darrel C. Karl at Sunday, September 13, 2015