The Kawakami troupe arrives in London in early June 1901 and opens at the Criterion in Piccadilly on June 18th.  Georges Scott’s previous drawing from L’Illustration (see Part 1) reappears in the June edition of The Sphere to coincidence with their opening.  Max Beerbohm rates Sadayakko above both Bernhardt and Réjane.  The artist William Nicholson designs a woodblock print (later issued in lithographic form) of Sadayakko in "The Geisha and The Knight."  F.D. Walenn's drawings of her performance in that play would appear the following year in The Studio. 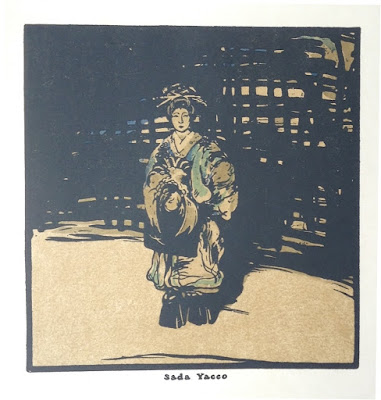 Sada Yacco as Katsuragi in "The Geisha and The Knight,"
The Studio, Vol. XVI, No. 62 (April 1902) by F.D. Walenn
Personal Collection
(color reproduction of drawings)

The Kawakami troupe's season in Paris at the Théâtre de l’Athénée begins on September 14, 1901.  Their previous repertoire has been expanded to include The Merchant of Venice, The Shogun, and Kosan and Kinkoro (a Japanese version of La Dame aux Camélias).  Sadayakko starts a kimono craze and licenses the right to use “Yacco” as a brand name for perfume, skin cream, candy, and a Westernized kimono for the everyday woman. 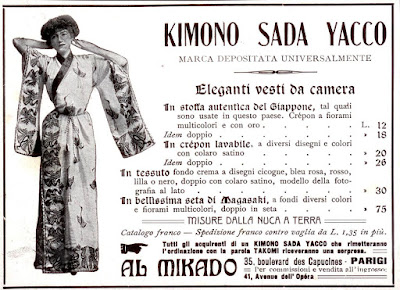 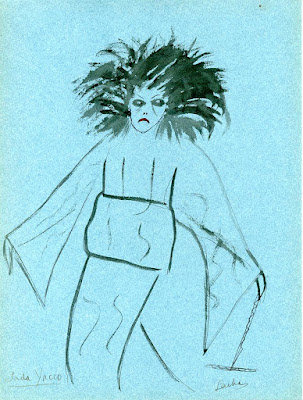 Loie Fuller asked a young Pablo Picasso to design a poster of Sadayakko, although it is never commercially issued. 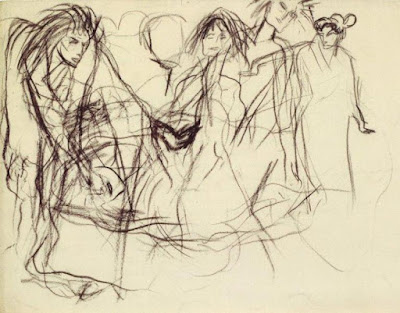 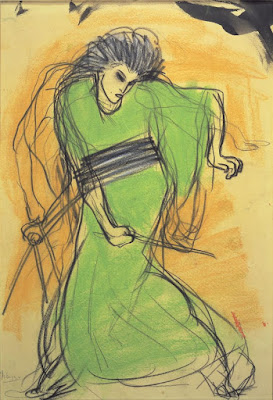 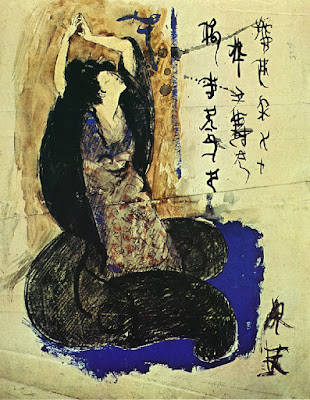 Raymond Tournon designs posters of both Otojiro and Sadayakko.  Rupert Bunny would again paint Sadayakko, this time in her mad scene from “The Shogun.”  Although this painting is usually dated to Sadayakko’s 1907 Paris trip, the role depicted would suggest it was painted in 1901, since she is not known to have performed “The Shogun” on her return visit. 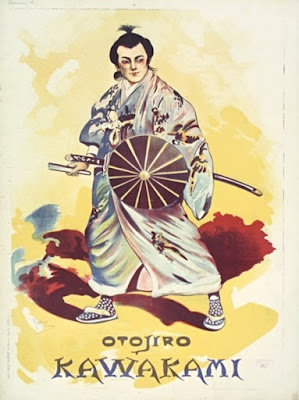 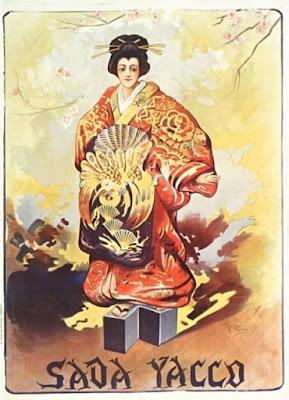 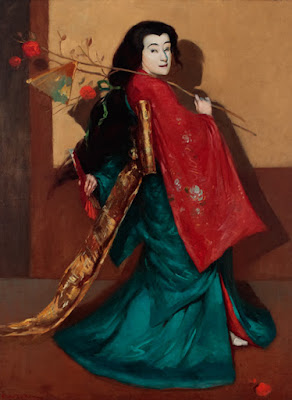 On November 10, 1901, the troupe sets off to Berlin by way of Holland.  They perform in Berlin without a break for more than a month.  Hirobumi Ito (Sadayakko's first geisha patron), now Prince Ito, having just finished his fourth stint as Prime Minister, is in Berlin to meet Kaiser Wilhelm II, and he meets Sadayakko at a reception held at the Japanese Legation.  (He also made a point of seeing her perform in Paris.)  She poises for portraits by Max Slevogt while in Berlin.  The portrait of Sadayakko with her stepson Raikichi is dated by Sadayakko herself.  It also contains a faint pencil sketch of the dancer in profile as a walking draped figure under the left Japanese brush characters.  Slevogt created the second portrait of Sadayakko around the same time. 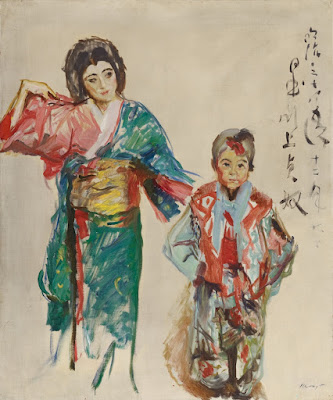 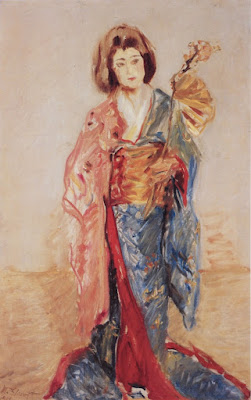 Emil Orlik also meets Sadayakko in Berlin and draws her, calling her a “very talented Geisha.”  In 1901, Orlik produces a black and white soft-ground etching with roulette of a “Japanische Schauspielerin” [Japanese Actress] which some scholars believe is Sadayakko.  It was subsequently issued in color as the frontispiece to Orlik’s famous Aus Japon portfolio in 1904.  However, to my eyes, it depicts an onnagata (a male actor playing a female role). 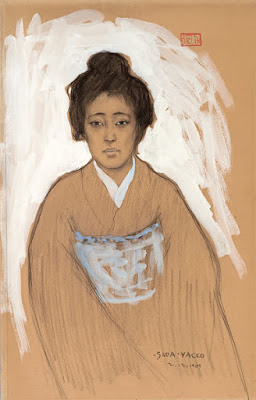 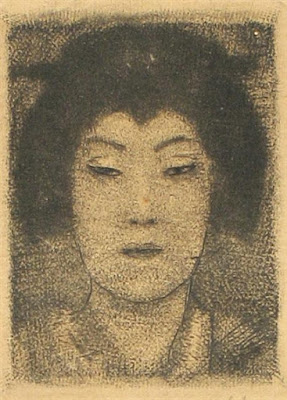 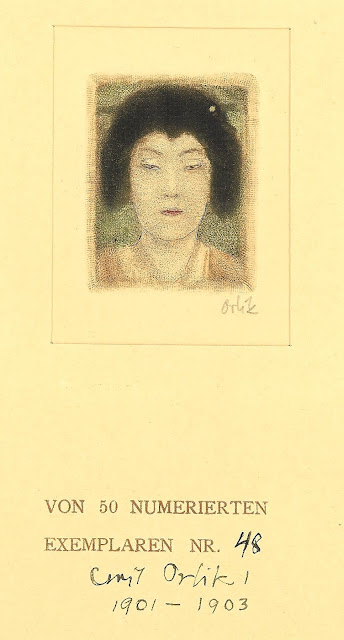 The Kawakimi troupe tours the rest of Germany until the end of January 1902.  The King of Saxonia sees them in Dresden.  King Otto of Bavaria sees them in Munich.  The troupe arrives in Vienna at the beginning of February, and they perform at the State Opera House before Emperor Franz Josef.  Gustav Klimt approaches Sadayakko and invites her to give a private performance for the members of the Vienna Succession but she is too tired to perform given her nightly schedule.

In Prague, Orlik sees Sadayakko and Otojiro perform “The Geisha and The Knight” and “Kesa,” and writes an article called “The Japanese Theater and Sada Yacco” for the February 15, 1902 edition of Prager Tagblatt.  In Budapest, the troupe performs for Prince Ferdinand and Princess Marie, Queen Victoria’s granddaughter.  While there, Jantyik Mátyás paints Sadayakko’s portrait. 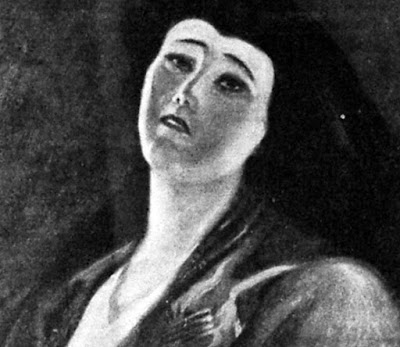 From Budapest, the troupe travels to Cracow and then to St. Petersburg, where Russian men would cover the ground with their dark overcoats for Sadayakko to walk over.  Otojiro and Sadauakko are invited to the Winter Palace and are presented to Czar Nicholas II.  After visiting Moscow, they travel to Italy by way of Germany.  The troupe was originally going on to Vladivostok on their way back to Japan, but they extended their contract with Fuller for another six months.

In Rome, Sadayakko makes the acquaintance of Hisako Oyama, the wife of the Japanese ambassador.  Giacomo Puccini had for some time been following the troupe’s progress with interest.  He was writing an opera based on David Belasco’s play Madame Butterfly and wanted to meet Sadayakko but arrives in Rome on March 16 and just misses her.  The troupe continues on to Naples, Florence, Livorno, Genoa, and Turin, arriving in Milan on April 25, 1902.  Puccini is finally able to Sadayakko perform in Milan.  He incorporates music that she played on the koto in “Kesa” into his opera Madama Butterfly, and fleshes out elements of Butterfly’s character based on her performance in “The Geisha and The Knight.”  He also decides to cut an entire act out of his opera because he admired the speed and compactness of the Kawakami troupe’s plays.

Next stop on the tour is Venice, where Sadayakko impresses the artist Paul Klee.  In May, the Kawakamis arrive in Barcelona, where Picasso renews his friendship with the couple.  Both are sketched by Ramon Casas, who also paints Sadayakko’s portrait. 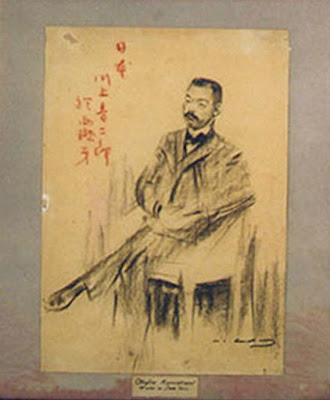 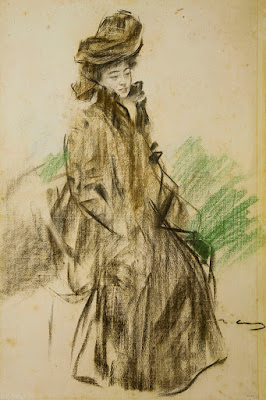 In Portugal, Celso Hermínio draws her for Comércio do Porto Ilustrado.  Thereafter, they travel to Toulouse, Marseilles, Lyons, Antwerp, Brussels, and back to London.  A French journalist reported that the troupe earned a million francs on the tour.  They set sail for Japan on July 4th and arrive in Kobe on August 19, 1902. 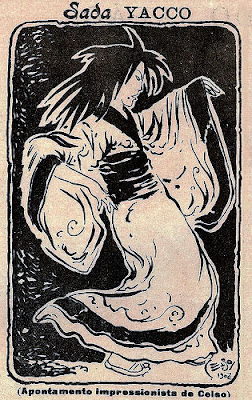 
For more about the life and career of Sadayakko, I recommend Lesley Downer’s “Madame Sadayakko: The Geisha Who Bewitched the West” (Gotham Books 2003), the source of most of the biographical information in this series of posts.


If a comment box does not appear below, click on this link instead:  http://easternimp.blogspot.com/2015/09/sadayakko-through-artists-eyes-part-2.html
Posted by Darrel C. Karl at Saturday, September 19, 2015