Despite her international success, it still was not possible for Sadayakko to act in real kabuki plays in Japan.  So, in 1902, she retreats to the shadows behind her husband.  Her husband Otojiro, dogged by ill-health even since having his appendix removed, starts work on project to reform Japanese theatre.  He intends to produce Western plays with a Japanese sensibility that would make them palatable for a Japanese audience.  Called “seigeki” or “true drama,” these productions will focus on the spoken word. 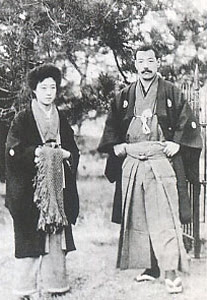 Kawakami’s first such production is a version of Shakespeare’s Othello with himself in the leading role.  Rehearsals started with matinee idol Asajiro Fujisawa as Desdemona, but Otojiro thought a Western play required a female Desdemona.  Accordingly, he begs Sada to do it as the grand finale of their European tour.  For this role, however, she needed to learn how to project; dialogue was largely incidental in her prior roles, which were driven primarily by expression, movement, and dance.  Othello opens on February 11, 1903 at the Meiji-za Theater in Tokyo and later tours in Kobe, Osaka, and Kyoto.  Sadayakko would later say this was the true beginning of her acting career.  Next up was “The Mousetrap,” a Japanese reworking of Hamlet in modern dress (decades before modern dress Shakespeare was performed in the West).  Otojiro was Hamlet’s father and Yakko played Oriyé (Orphelia). 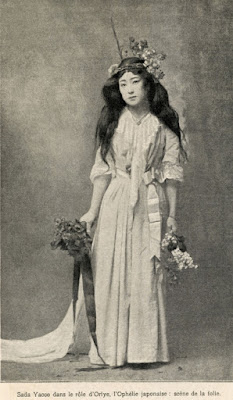 By 1907, Otojiro’s health has forced him to retire from acting.   He nonetheless still plans to build Japan’s first truly modern Western-style theatre.  In July, a party of eight including the Kawakamis leaves for Paris in order to make a formal study of all aspects of Western theater.  Sadayakko and Otojiro stay at a villa that had been the home of André Gide and the Goncourt brothers.  She attends the Paris Conservatoire in order to hone her acting skills and studies Western techniques.  She had not intended to publicly perform on this trip but the actress Réjane lured her out of seclusion for two performances at her new theatre in January 1908.  After performing at the Japanese Embassy, she is persuaded to play a brief season at the Theatre Moderne for 2500 francs per show.  The Czech painter and printmaker Tavik F. Simon sketches her as she performs in a Japanese reworking of Chekhov’s “The Three Sisters” at the Theatre Moderne, later using one of those sketches as the basis for one of his paintings.  (The sketches come from a 1905-1908 sketchbook that I obtained from one of Simon's grandsons. 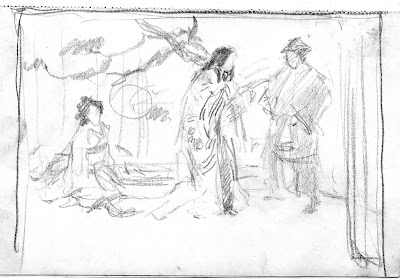 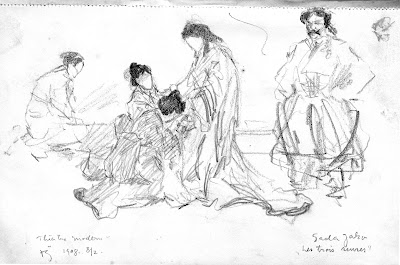 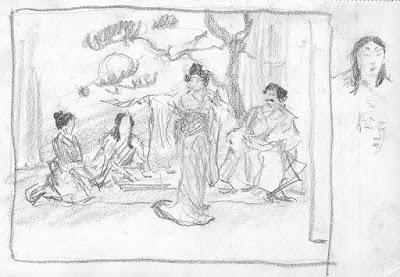 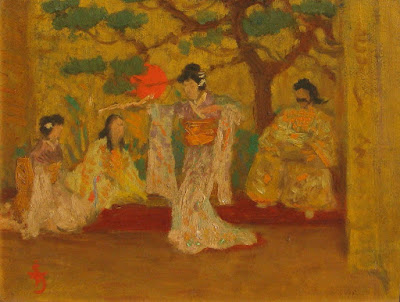 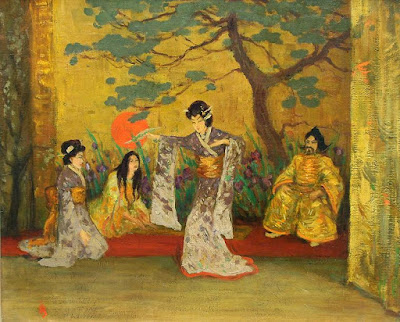 By May 1908, the group is back in Japan.  Otojiro plans the Imperial Theater (Teikoku-za) in Osaka, supported by Prince Ito, who had become resident-general in Korea.  In September, Yakko starts a school for Japanese actresses called the Imperial Actress Training Institute.  One of her students, Ritsuko Mori, will become the leading actress of her generation.  The Imperial Theater has its grand opening on February 15, 1910.  Their first show is a reworking of Jules Verne’s Around The World In Eighty Day with a cross-dressing Sadayakko play a Japanese explorer based on Phineas Fogg.  In 1911, Sadayakko undertakes Sara Bernhardt’s role of Marguerite in La Dame Aux Camélias. 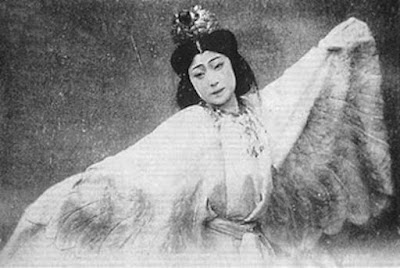 Otojiro dies on November 11, 1911.  His last wish was for Sada to carry on his work in the theatre.  Asajiro Fujisawa wants to start up the Kawakami all-star troupe and tour in Kawakami’s honor with Sadayakko as the star.  Initially she declines, but the actors insist.  Later in the year, the troupe adds Belasco’s Madame Butterfly to their repertoire which they perform in English.  In 1913 she becomes the face of Reio Cosmetics.  In 1914, she would play Oscar Wilde’s Salome at age 43.  However, she begins to get criticized for playing young women parts (and faces increasing competition from younger actresses for those parts). 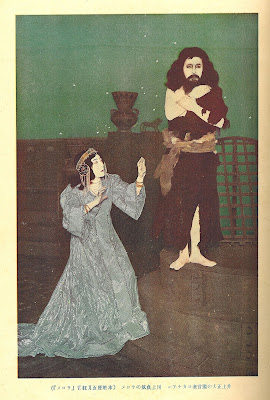 A couple of years earlier, Sadayakko became the mistress of an old flame, Momosuké Fukuzawa, a wealthy married industrialist and stock financier.  He would get richer still by building a hydroelectric dam in the Kiso Valley.  They would remain together until 1933.  In 1915, she plays Queen Artes, in a play called “Gunshin” (which could mean war hero or Mars, the God of War).  Natori Shunsen, who would soon become the most prolific of the shin hanga kabuki artists, depicts her in one of the earliest woodblock prints of his career.  Based on Shunsen’s print and an illustrated handbill for the play, my guess is that Queen Artes might be Artemisia, the warrior-queen of Halicarnassus. 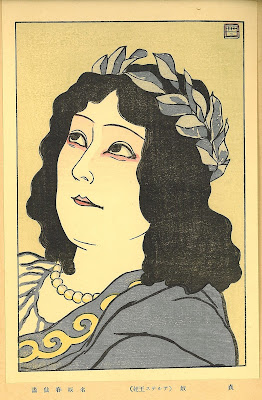 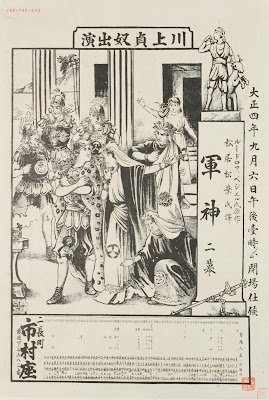 In September 1917, Sadayakko announces her retirement at age 46 and performs in a series of farewells based on Aida.   She gives up her stage name and is known thereafter simply as Sada Kawakami.  In addition to spending time alone with Momosuké and overseeing grand parties for Momosuké’s business associates and political guests, she starts up a spinning and weaving company called the Kawakami Silk Company.  The enterprise would sell silk sold under the brand names Yakko Meisen and Yakko Silk.  As a widow with no children, she want a heir to take care of her in her old age and to tend her grave.  In 1918 Sada adopts nineteen-year-old Hirozo Ino, a relative from Momosuké’s mother’s side of the family.  In 1920, thirteen-year old Tomiji Iwasaki joins Sada’s family.  Tomiji and Hirozo are second cousins and will later marry each other.  In December 1924, Sada opens the Kawakami Children’s Music and Drama School in Tokyo. 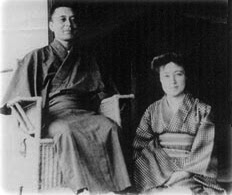 Momosuké retires from his companies in 1928, and Sada gives up teaching at the children’s school to take care of him.  Although they separate in 1933, she returns after his death in 1938 to plan his funeral in his wife’s absence (which, as Momosuké’s mistress, Sada is not permitted to attend).  Thereafter, she builds a temple by the Kiso River called Teishoji, Temple of Shining Chastity, that is consecrated on October 28, 1933.  It has a storehouse for her costumes, photographs, and momentos, and a place for her tomb.  During WWII, Sada retreats from Toyko to her small villa in the seaside spa resort of Atami.   Her Tokyo mansion becomes a casualty of Allied bombing.  Sada will die at her Atami villa on December 7, 1946 at age 75 of liver cancer and cancer of the throat and tongue.  Her death only receives a couple of lines in the newspaper, her past glories all but forgotten. 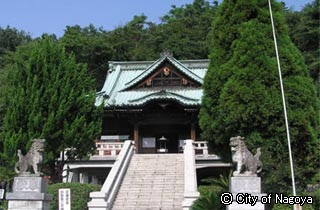