A couple of months ago, I stumbled across an untitled print by accident on eBay that depicted a procession of Chinese men before a temple.  It was made by Lowell Stanley Bobleter (1902-1973), a Minnesotan print maker I had never heard of.  A quick search on eBay immediately turned up a second Bobleter drypoint of a Korean man.  These, it seemed, were the by-products of a man who had traveled to the Far East at some point.  Further on-line research revealed that Bobleter was a relatively prolific print maker with over 215 etchings and drypoints to his name.  Were there other Asian prints to be had by Bobleter?  What was his story? 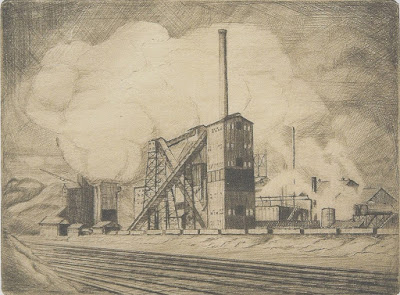 What I learned explained the reason for Bobleter's obscurity: he was a victim of really bad timing.  Although he has been recently "rediscovered" in certain circles as a Minnesota print artist, Bobleter largely remains a relatively unknown artist to most print collectors.  This is a man who, upon taking up etching, almost immediately became one of the most highly praised regional American print makers of his day.  The only problem was that Bobleter's first print was produced in 1930 at a time when the world was entering the Great Depression.  If the middle class had any disposable income to speak of during the 1930s, few spent their money on prints and it was the rare print maker indeed who was able to support himself or herself solely from the sales of etchings or drypoints.  By the time that the Depression was over, the etching revival was all but dead. 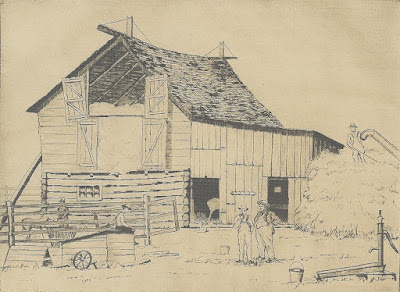 Although born in New Ulm, Minnesota, Bobleter grew up in St. Paul where, by age 17, he was working as a clerk in a coke refinery.  From 1923 to 1925, he studied drawing at the St. Paul School of Fine Arts in his off-hours, and subsequently studied etching with the St. Paul artist George E. Resler.  Resler stopped making etchings in 1930 and Bobleter acquired Resler's press.  Bobleter's earliest works were largely academic exercises used to master the technique of etching.  By July 1930, however, he had sufficiently mastered the rudiments of drypoint and had abandoned etching altogether.  His notable prints at this time depicted local urban subjects such as the St. Paul riverfront and the coke plant where he worked.  As the Depression worsened, Bobleter would occasionally design WPA-like sociological/political prints showing closed factories, abandoned farmers, and people unsure about how they will be able to pay their mortgages.  By the end of the decade, he would also depict a number of Colorado ghost towns. 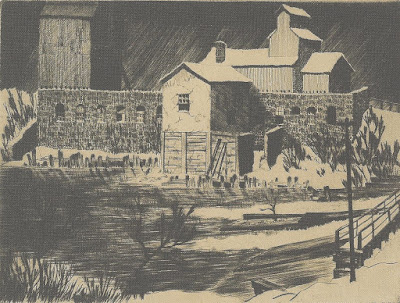 At the same time, Bobleter also began to depict more rural landscapes depicting rolling hills, isolated farmhouses, and bleak Minnesotan winters.  As noted Bobleter scholar Julie L'Enfant notes in her monograph Patterns of Silence: The Prints of Lowell S. Bobleter in Minnesota History (Summer 2015), Bobleter "was inspired by Japanese prints to break away from illusionism (the use of linear perspective and chiaroscuro to create the illusion of three-dimensional space on a flat surface) and move toward a more independent vision" where "[t]rees, hills, and river are depicted with strong outlines and sparingly placed tonal areas in a modern, flat style." 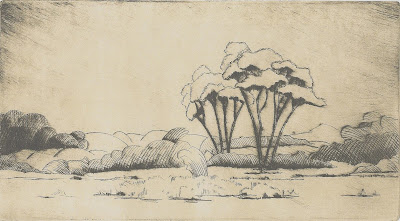 As I indicated, critical success came early to Bobleter.  For example, his print "Old Foundry" won the First Print Prize at the Minnesota State Fair in 1931.  Later that year, his print "Coal Tipples" was named one of the Fifty Prints of the Year by the American Society of Etchers.  "Silence" won first prize at the Minneapolis Institute of Art in 1936, was also listed in Fine Prints of the Year.  Bobleter's prints appeared in the Print Collectors Quarterly, and was featured in their Fine Prints, a booklet listing "thirty-seven of the most important American print makers," including John Taylor Arms, Wanda Gág, Armin Landeck, Martin Lewis, and Stow Wengenroth. 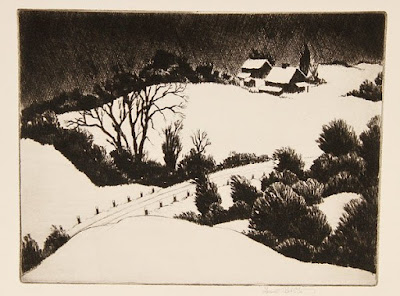 By the early 1940s, Bobleter's primary attention and interest had shifted from printmaking to painting.  Many of the prints he did make during this period were commissioned work or blatantly commercial endeavors such as greeting card designs mass produced on steel or chrome-faced plates.  However, Bobleter's most important and lasting contribution to Minnesota's cultural life was as an educator.  While still working as a clerk/accountant, he served as the director of the St. Paul Gallery and School of Art from 1940 to 1942, and was an instructor at the fine arts program at Hamline University from 1942 to 1948.  In 1948, he purchased the Mills Academy of Art in downtown St. Paul and renamed it the School of Associated Arts (later known as the College of Visual Arts), where he was the school's president and taught art history until his death in 1973. 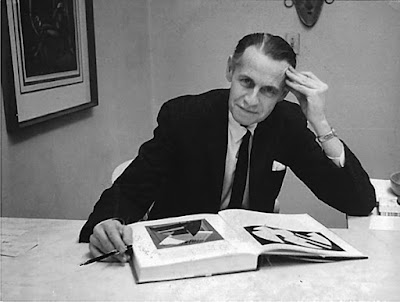 No catalog raisonné currently exists for Bobleter's prints, but with Julie L'Enfant's help I was able to obtain a copy of a handwritten inventory of Bobleter prints compiled by the late Robert L. Crump based on records that Bobleter kept between 1930 and 1942.  This revealed that the Chinese temple scene was called "Come All Ye Faithful" and that it was printed in December 1935.  It was part of a projected edition of 25, although only 12 prints appeared to have made, 9 of which were used as Christmas cards.  (My copy appears to be one of the remaining three other copies.) 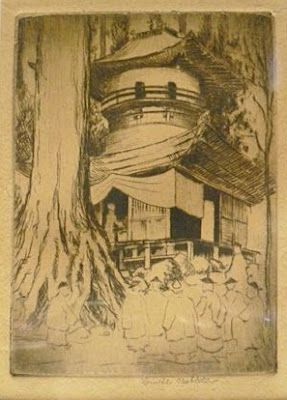 Julie L'Enfant informs me that Bobleter never traveled to Europe, let alone to Asia.  Consequently, this scene would appear to be entirely the product of Bobleter's imagination, something that seems obvious in retrospect.  The print's title is certainly in keeping with it having been primarily intended as a Christmas card for friends and family, although no doubt some degree of irony was also involved, given the non-Christian scene portrayed.  Moreover, the rather free manner in which the Chinese men are depicted would be entirely consistent with it not being based on personal observation.

Bobleter's other Asian print is called "The Korean," and was first printed in November 1933.  The stated edition was to have been 35.  If I'm interpreting Crump's notations correctly, only 25 copies were made, albeit ones printed in small batches on four separate occasions.  It is also quite tiny, measuring only 1½" x 2¼", roughly half the size of "Come All Ye Faithful." 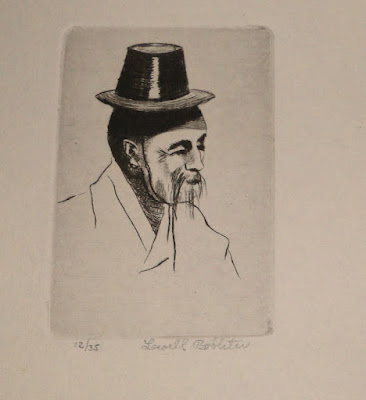 But here's the mystery.  Why did Bobleter make the drypoint portrait of the Korean man?  Was it someone who visited St. Paul?  Was it a commissioned piece?  The extremely small size of the print might suggest that it was designed as an ex libris print, although it is lacking the usual indicia such as the book owner's name or initials.  One also would have expected that the full edition would have been printed if it had been commissioned.  For the life of me, I can't fathom why, on some day in November 1933 an artist who's never been to Korea would get out of his bed in St. Paul, Minnesota and, out of a myriad of possible subjects, decide to make a drypoint of a Korean scholar. 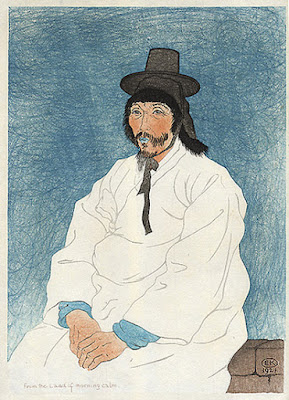 From the Land of the Morning Calm (1921) by Elizabeth Keith
Courtesy of Hanga.com
(woodblock print)

In the case of Elizabeth Keith, it is known that she spent considerable time in and wrote at length about Korea.  Her print "From the Land of the Morning Calm," like many of her woodblock print portraits, is as much a cultural anthropology study as it is a work of artistic expression.  Paul Jacoulet likewise spent time in Korea and designed several Korean figure prints (often reusing the same models to depict different characters).  Kawase Hasui's sole print of a Yangban (Ryôhan) published by Watanabe Shozaburô was specially commissioned by the San Francisco print dealer T.Z. Shiota and was based on a photograph that Shiota provided to Hasui.  But what possessed Bobleter to tackle the same subject?  Something must have drawn him to the subject, but what? 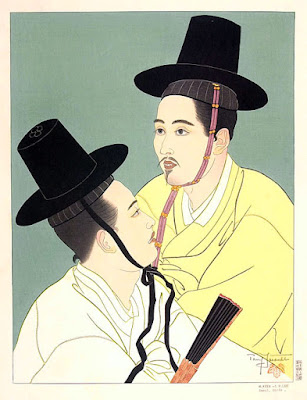 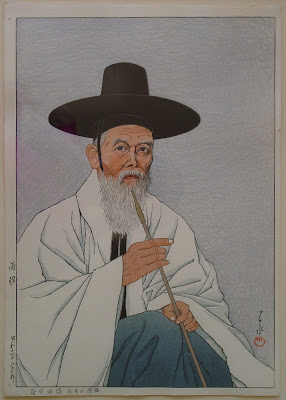 None of the other titles in the Crump inventory list suggest any other Chinese or Korean subjects, though it must be admitted that many of Bobleter's titles are hopelessly generic (e.g., "Sunrise," "Trees," "Rock," etc.).   There is, however, one other title, "The Old Sage," of possible interest.  The ethnicity of the man portrayed in this drypoint is not entirely clear, but looks to me like he might be Indian or Pakistani.  But who the actual model was (if there was a model), or what drew Bobleter to this particular subject likewise remains unknown at this time. 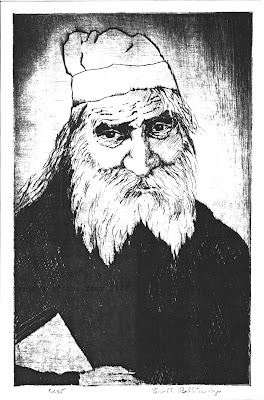 My thanks to Julie L'Enfant for sharing her knowledge about Lowell Bobleter and his work.